Rainier – My Unhealthy Addiction to an Amazing Mountain

04 Jan Rainier – My Unhealthy Addiction to an Amazing Mountain

Posted at 03:47h in My Adventures by Anastasia Allison 0 Comments

I still remember the first time I saw Mt. Rainier in person.  I moved to Washington in the middle of the winter when the weather can be best be described as, “a grey drizzle.”  Then sometime in February, without warning – the clouds parted and gave way to the most beautiful blue sky and bright sun I had ever seen.  I was driving down I-5 and suddenly gasped, “Woah – look at that huge white cloud!”.  My friend laughed, “That’s not a cloud – that’s Mt. Rainier.”  Needless to say, I was awestruck.

As my time living in Washington progressed, I had the opportunity to climb Mount Baker.  I had never climbed a glaciated peak in my life, but I decided that I needed to try.  While that first trip up Mt. Baker was a comedy of errors (note to self: do not forget toilet paper and sunglasses when you plan to climb your first mountain), I was completely hooked.  Naturally, I developed an unhealthy obsession with wanting to climb Mt. Rainier.  I needed to climb Rainier.  I had to climb Rainier.  My life would not be complete until I had climbed Mt. Rainier.

And so, I headed off in 2007 with a group of friends to try and climb it.  The unofficial leader of our group had planned everything, so I had no clue what was going on.  I didn’t realize that Mt. Rainier had its own weather patterns and that 70mph winds were predicted for that night.  I just figured that, like Mt. Baker, everything would go really smoothly.  Boy, was I wrong. 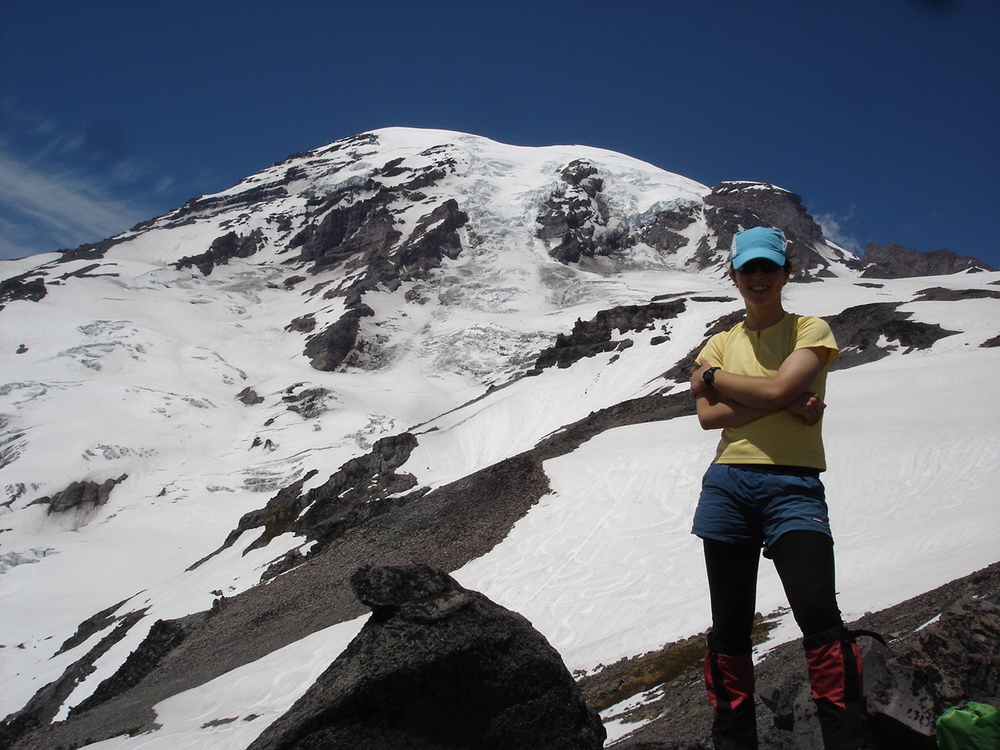 We went to bed that night in 2007 with high hopes of reaching the summit the next morning.  What actually ended up happening is that we woke up to nearly 70mph winds.  I was knocked off my feet on the short walk to the outhouse.  Our group decided that continuing would not be safe, so my tent partner gave me a shot of tequila and I fell asleep with the tent pole of our non-4-season tent smacking me in the face every three seconds.  The next day we woke up and hiked to the base of the Ingraham Glacier as a consolation prize.  Unbeknownst to me (because I had no clue what I was doing and because I was relying on our group leader for guidance), we ate lunch essentially sitting under the Ingraham Ice Fall – a spot that is notorious for claiming lives in catastrophic avalanches.  The thought of it makes me cringe now. 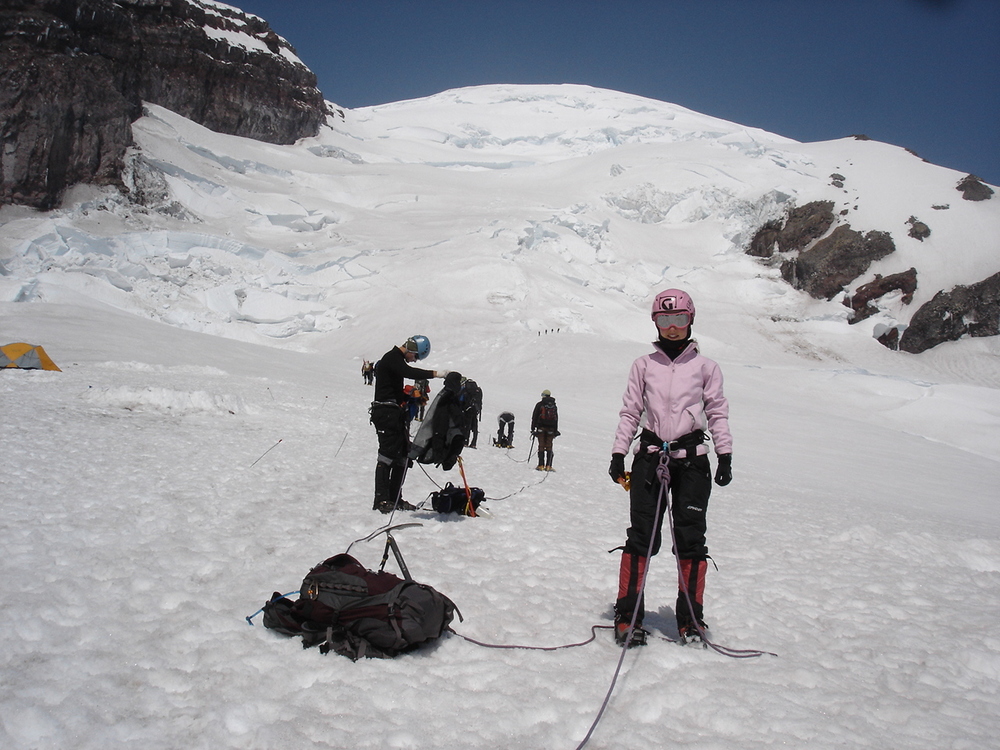 So. Much. Pink.  The Ingraham Glacier/Icefall are in the background, and Disappointment Cleaver is the rocky spine to the right.

Not one to be deterred by a missed summit, I obsessed about the mountain for the next year as I prepared for our 2008 attempt.  This time, we opted for a route on the East side of the mountain, up the Emmons Glacier.  Again, I went with the same (large) group.  Looking back, I remember seeing the forecast and noticing that the winds looked pretty high – but I foolishly thought, “Well, they can’t be THAT strong.”  Wong again.  We started up on our ascent in a windstorm that was later described on the Official Mt. Rainier Climbing Blog as, a “WIND EVENT.”  Anytime that “wind” becomes an actual EVENT (in CAPS), you know it is not a good thing. 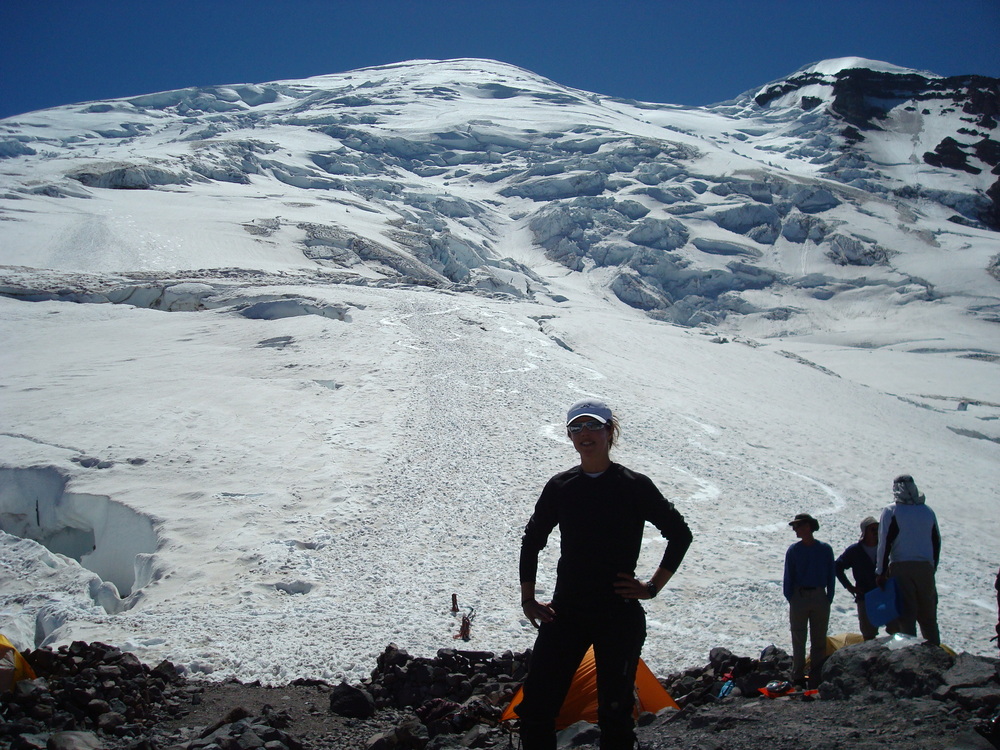 Circa 2008, below the Emmons Route on Mt. Rainier.

During the wind event, our group made it to approximately 13,300 ft on the Emmons Glacier, before we decided to turn around.  I vividly remember that moment – our group leader was screaming at us, but the wind was so loud that all I could see was his mouth moving.  The sound was deafening – like a tornado had become an unruly passenger on a freight train.   Each gust sent me falling to the ground in self-arrest with my ice axe so I wouldn’t go careening off the mountain.  I was so cold from the negative wind chill that I could barely function.  To make matters worse, I couldn’t get to my food … my water completely froze … and I tried to pee using my little “pee funnel” (essential for a female wearing a climbing harness), and NOBODY ever told me that you should not pee facing into the wind.   On the way back down the glacier, the wind was still so strong that I was knocked off my feet almost every other step.  By the time we made it back down to Camp Schurman, I was so brutally exhausted that I was in tears – I climbed into my tent, and with no desire to unpack my sleeping bag or sleeping pad, I passed out. 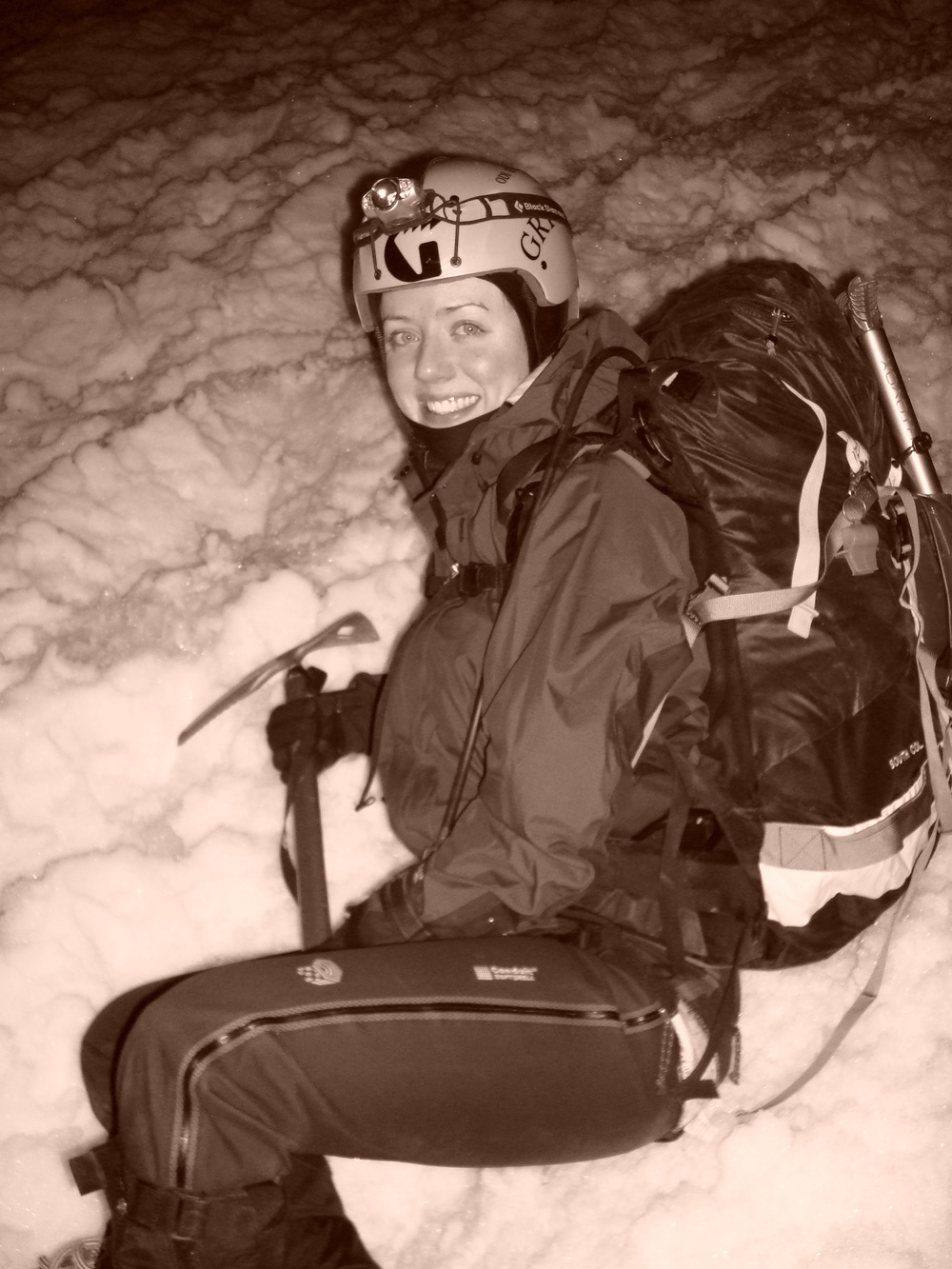 This must have been at the start of the 2008 climb, because I’m smiling and not crying.

I remember when I called my family in 2008 to tell them that I hadn’t made it to the summit – I felt so disappointed.  All of my friends kept asking questions like, “Why didn’t you make it up?  The weather was so clear!”  It was so hard to describe what the conditions had been like, and that there had been no safe way to ascend the mountain.  What made it more frustrating was seeing a few other friends (with zero climbing experience) hiring guides and scoring a  bluebird weather day and strolling up to the summit of Rainier with seemingly no effort – why couldn’t that just happen to me?

In 2009, still slightly demoralized from my previous attempts, I decided to try again with three friends from work.  Looking back, I laugh at the size of my pack – I packed multiple weights of long underwear, several jackets, and countless pairs of pants.  My friend Michael carried several pounds of chocolate covered espresso beans.  To this day (and I have completed week-long self-sustained trips), I have NEVER carried a pack as heavy as the one that I carried up Mt. Rainier. 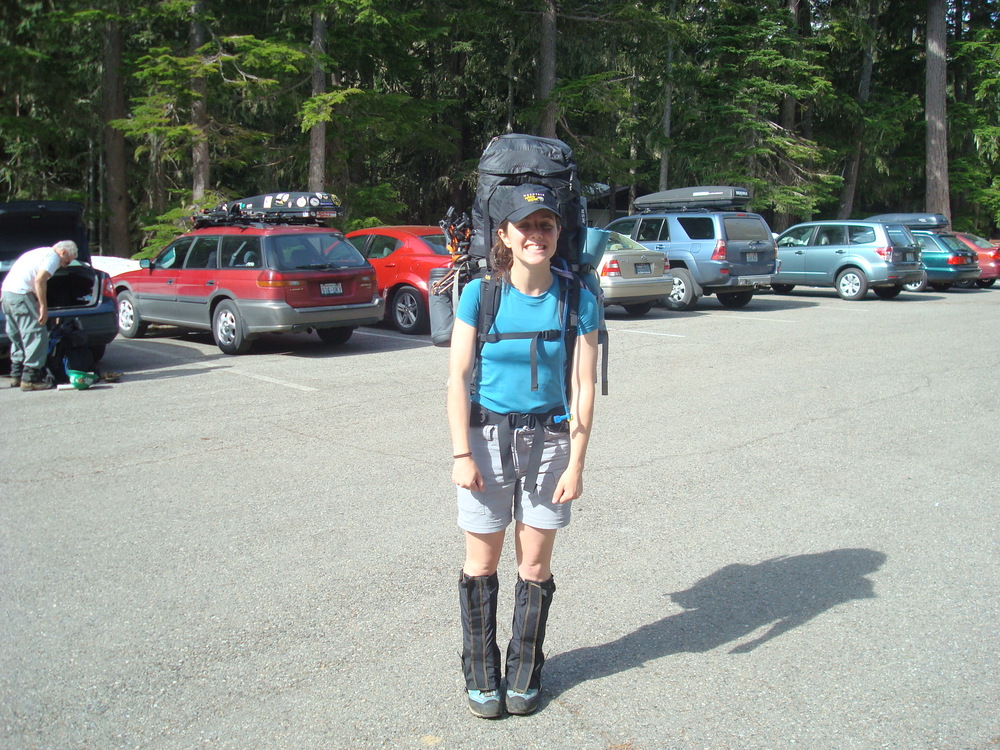 Classy.  With a 60lb pack.  I think that strange expression is because I can’t straighten out my neck due to the pack size.

When we woke up at 11:30 PM to start our climb the wind was screaming through camp with a fury.  I was distraught, “NOT AGAIN!!”.  Despairingly, we packed our bags and grabbed our climbing gear and decided to head out, hoping that conditions would improve.  Already, I was imagining having to make my third phone call in three years to let my family know that I hadn’t climbed Mt. Rainier for the THIRD time.  My crampons crunched loudly in the snow and my heart beat loudly in my skull as we set off from camp – the wind whipped my hair and stung my eyes in the dark, frigid night.  As we progressed forward, I lost track of everything –  my mind focused on the important things that I needed to do – walk, breathe, walk, breathe.  Suddenly, I became acutely aware that the wind had magically dissipated – I looked up towards the summit, looming far ahead, and I saw a light so bright that it made me squint. At first I thought it was the headlamp of another climber, but very quickly I realized it was a star, brilliantly shining on the glistening glacial snow – guiding us higher up the mountain. 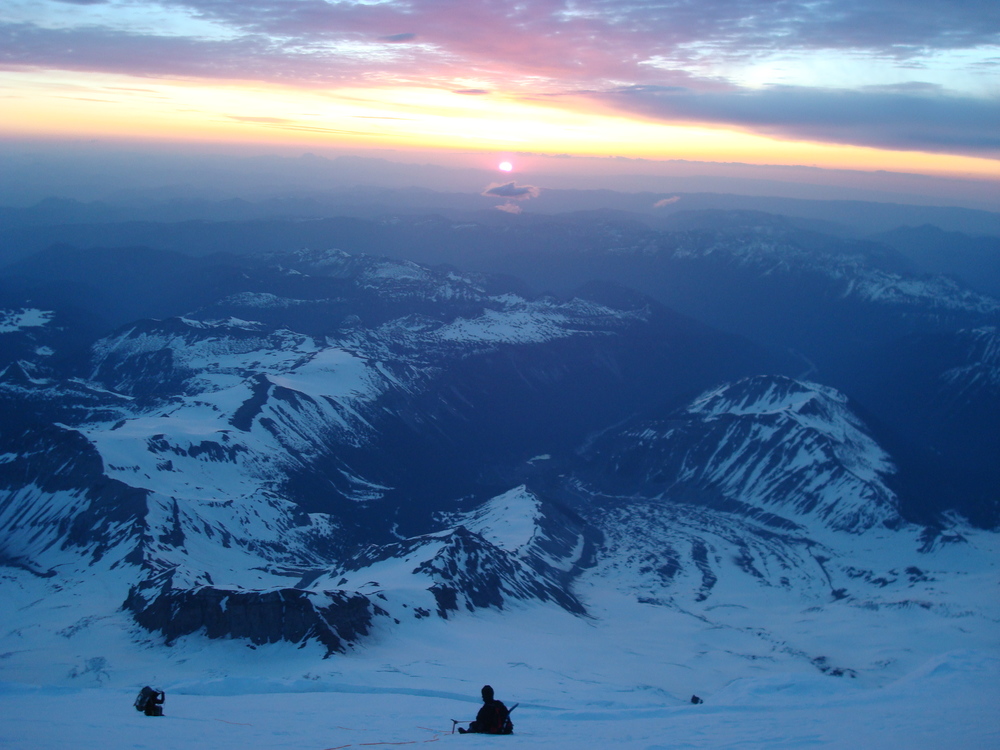 Sunrise from just below the crater rim of Mt. Rainier, circa 2009.

It wasn’t until we reached the rocks of the crater rim that I actually realized we were going to make it.  Not surprisingly, I was completely overwhelmed by emotion.  As I watched the sun burst over the horizon, tears streamed down my face.  I had envisioned this moment for 3 years – and it was quite unlike anything I had ever experienced.  That first step onto the summit of Mt. Rainier – the culmination of 3 years of not letting go of my dream – that remains the purest, most undiluted joy that I have ever experienced. 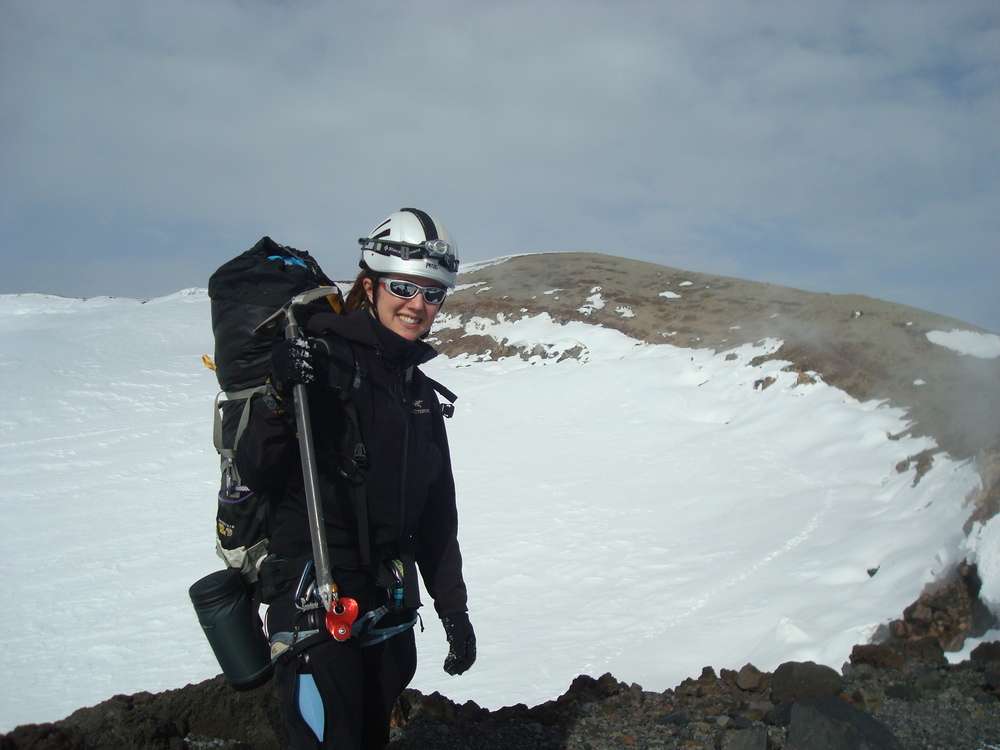 Ironically, I don’t have a summit photo from my first time on the summit of Mt. Rainier.  I handed my camera to one of my climbing partners – he thought he had taken a photo – apparently, in his gloved hand, he did not.  Guess I have to go back for that photo…

After our successful summit bid on Rainier in 2009, I thought I’d be thrilled.  I thought I’d be ecstatic, but I felt lost.  For three years, I had a singular focus – train for and climb Mt. Rainier.  Without that focus, I didn’t know what to do. I desperately needed something “bigger” than Mt. Rainier.  Over the next few years, I repeated the process again and again – focusing my attention on something big and then becoming depressed when I was finished.  It got to the point where mountaineering was more of an addiction – I actually had panic attacks if I thought I wasn’t going to be able to fit in enough trips to satisfy my ever growing desire for adventure.  I needed mountains to function at being alive, as opposed to enjoying mountains BECAUSE I’m alive.

Gradually – I realized I needed to find another way.  I never went “cold turkey” on mountaineering (I’m not crazy!!!), but I started to enjoy low-key backpacking more.  I allowed myself to enjoy sitting at home, and reading or doing nothing (I’m sure this stuns many people about me!).  I watched football.  I got two cats.  I found a guy who (amazingly) puts up with me and enjoys the wilderness as much as I do.  I put no pressure on my “success” as a climber – only to get outside and enjoy the experience with people that I care about, and to share that experience with as many people as I can. Being outside enhances my life in a way that nothing else can – quite simply, the happiest times of my life have happened in the wilderness – and that will never change. 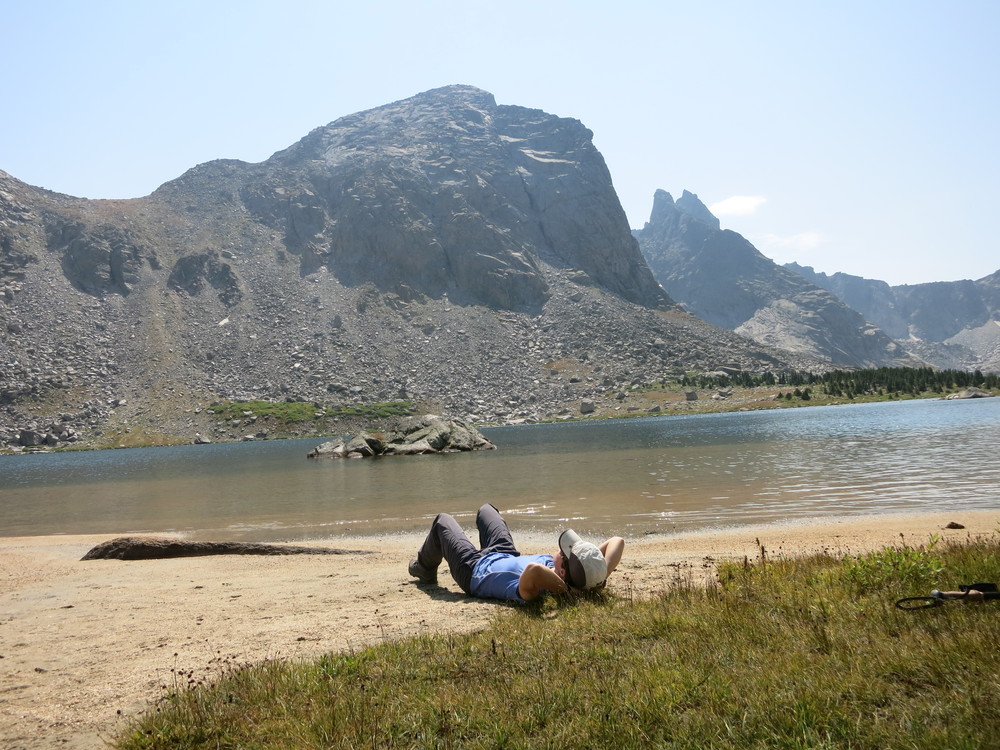 See how relaxed I am (I won’t mention the 20 miles of hiking prior to this photo being taken…)?

On July 28, 2014, I decided it was time to get that missing summit photo.  I headed back to Mt. Rainier with Aaron, Zak and Brenda.  We were quite the team – four people sharing a 3 person tent (yes, I know it’s supposed to be the other way around).  With our hearts and minds aimed at the summit, we set off at a blistering pace (passing two guided groups who had started much earlier – snap!).  Nearly four hours and thirty minutes later, Zak announced that our altitude was, “14,100′”.  “Really??”  I was stunned – there was no way we were that close to the summit.  And then, we stepped into the crater of Mt. Rainier.  The sun hadn’t even risen yet when we crunched our way across the frozen snow, signed the register and walked to the summit.  We huddled together in the cold and watched as the horizon changed from a deep rich blue to an explosion of warmth so stunningly beautiful that we could actually feel the colors of the sun touching our skin.  So much is different in my life since the first time I took a step onto the summit of Mt. Rainier many years ago, but that feeling – that joy –  it is exactly the same.  There are some things in life that are better left unchanged. 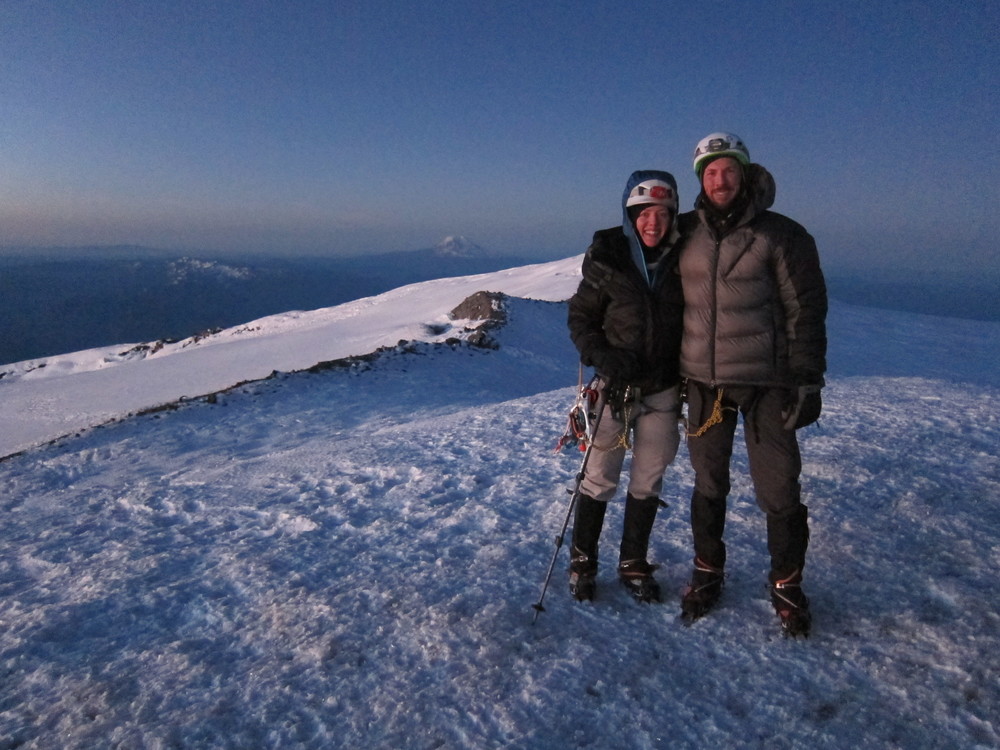 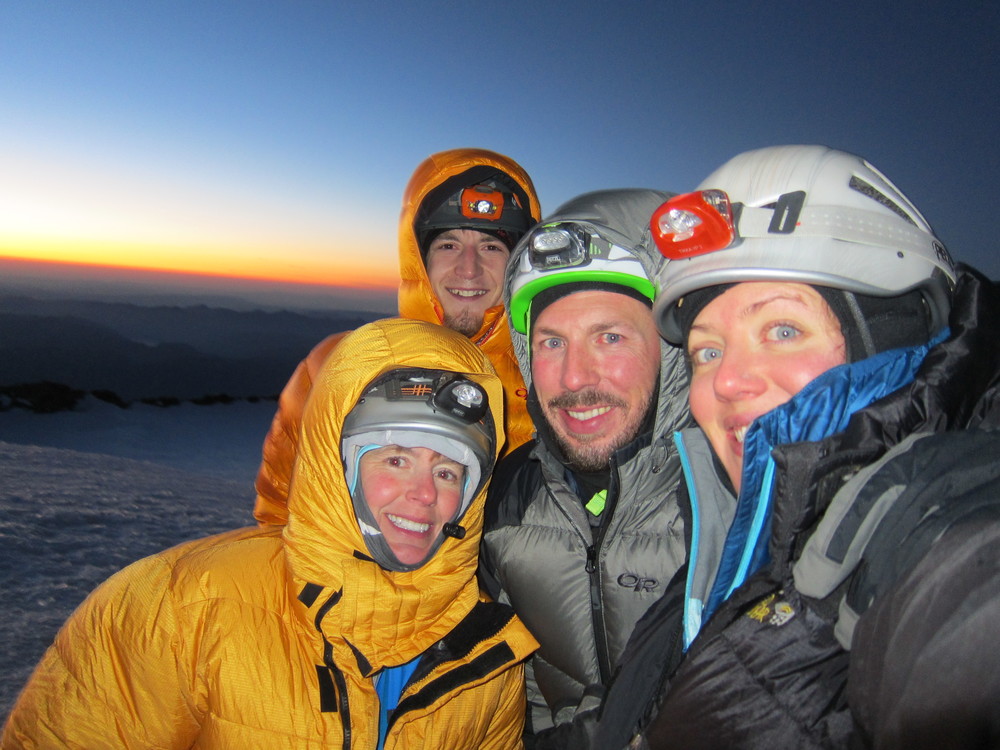 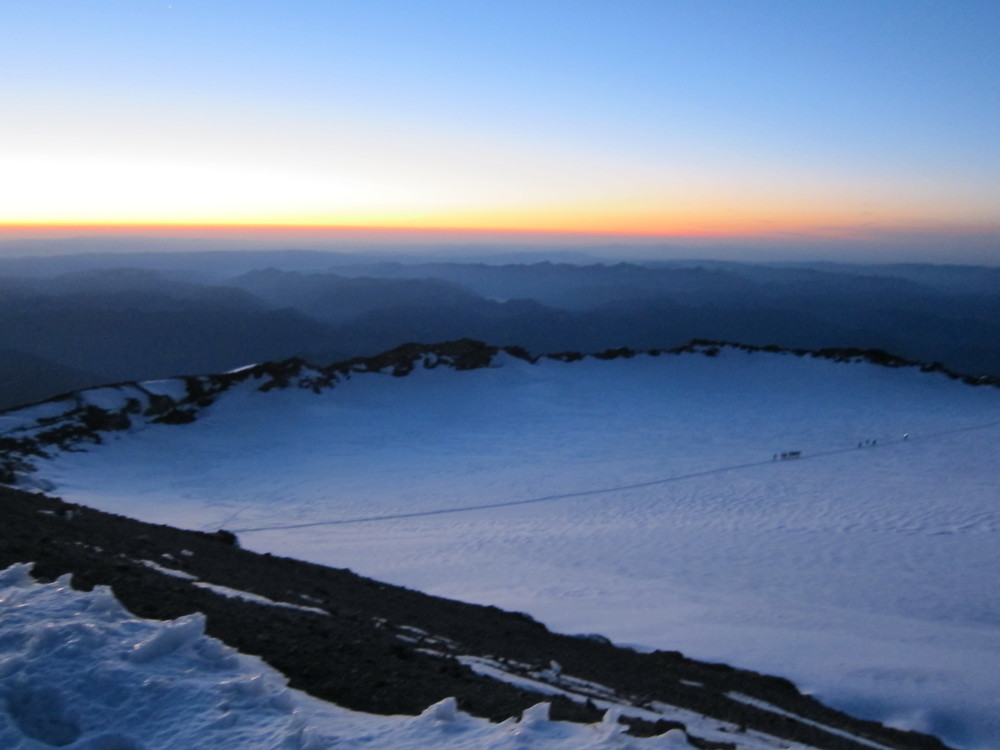 Looking across the crater of Mt. Rainier just before sunrise.