That time I won the Powerball jackpot in a snow cave.

14 Jan That time I won the Powerball jackpot in a snow cave.

Posted at 04:48h in My Adventures by Anastasia Allison 3 Comments

Sometimes, when you only have two days off before a business trip, sleeping in a snow cave sounds like a really good idea.  It doesn’t take much to convince me to go on an adventure – especially when it involves something new.  I had never built and/or slept in a snow cave in my life, but when my friend Brenda proposed the idea, I thought, “Sure, why not?”  And so, Aaron and I found ourselves making the drive to Mt. Rainier National Park on a Saturday morning, with the sole purpose of hiking a short distance, and building and sleeping in a cave made of snow. 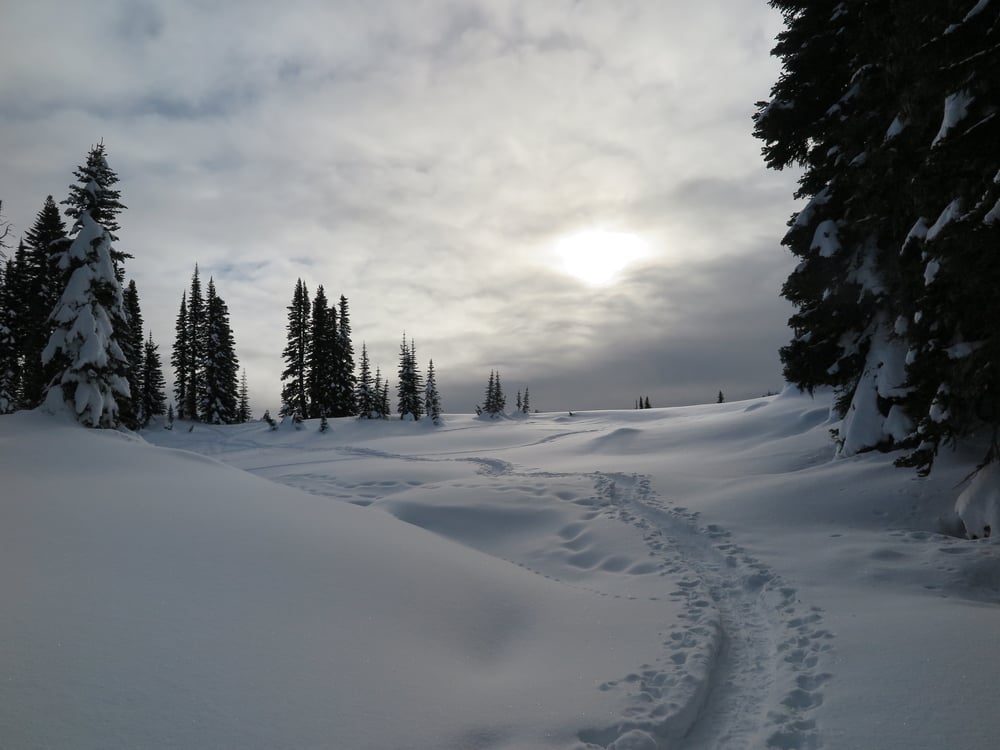 Looking back at our tracks on the hike in.

Building a snow cave is really fun, if you love to dig.  It is a lot of digging.  Digging for hours.  Just when you think you don’t have to dig anymore – surprise! – you have to keep digging.  First, we selected a location and probed around in the snow to make sure there weren’t any major obstacles in our way such as trees, rocks or victims from last year’s snow cave season.  We burrowed down to form the entrance to the cave, and then started tunneling into the snowbank.  As we progressed, we used a sled to carry out the massive quantities of snow that we were removing.  Slowly, but surely, we inched our way deeper and deeper into the snow. 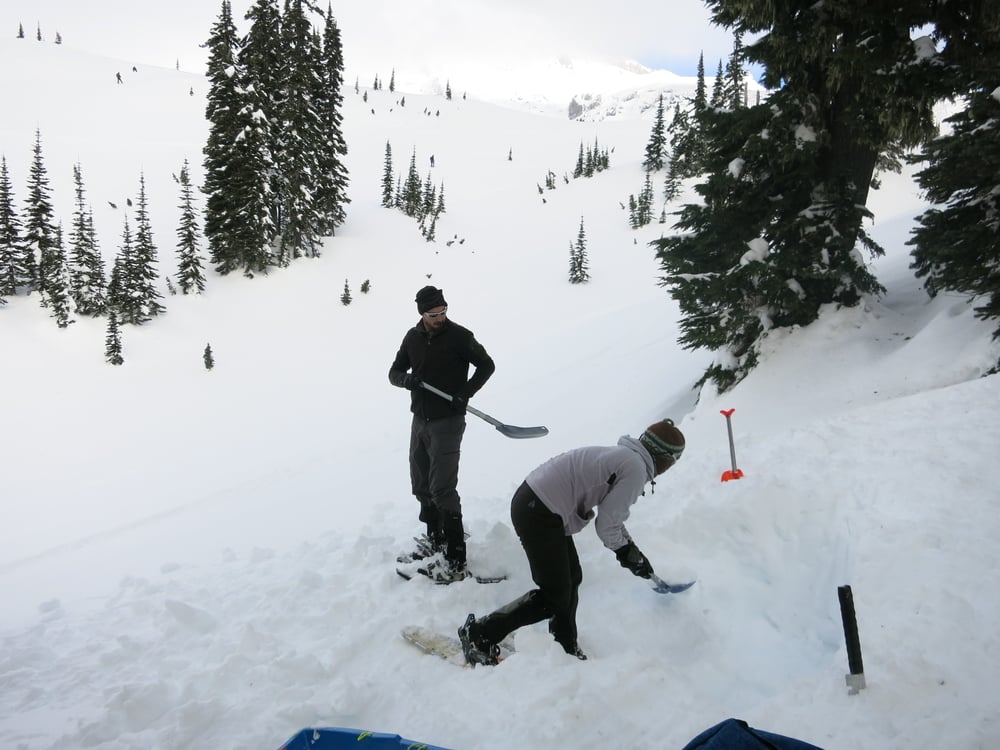 The digging begins.  To the right of the photo is a snow saw, which is helpful in breaking apart large chunks of consolidated snow.

Nearly four hours after we had shoveled the first scoop of snow, we were smoothing out the ceiling, polishing off the bed platforms and putting the finishing touches on the air vent above our beds.  As the sun started to set, we decided to go for a walk up the hill behind our cave – Mt. Rainier was completely enveloped in clouds, except for the summit which was glowing with the last light of the setting sun.  After our short walk, we returned to our little cave, heated up our water for tea and dinner, and sat in our extremely cozy snow orb, illuminated by the warm light of a candle.  At the time, it seemed so ideal – so picturesque and quaint.  Sipping tea and eating dehydrated chili with my two favorite people inside a snow cave – such a perfect evening!  I couldn’t imagine that the experience would soon be far from magical. 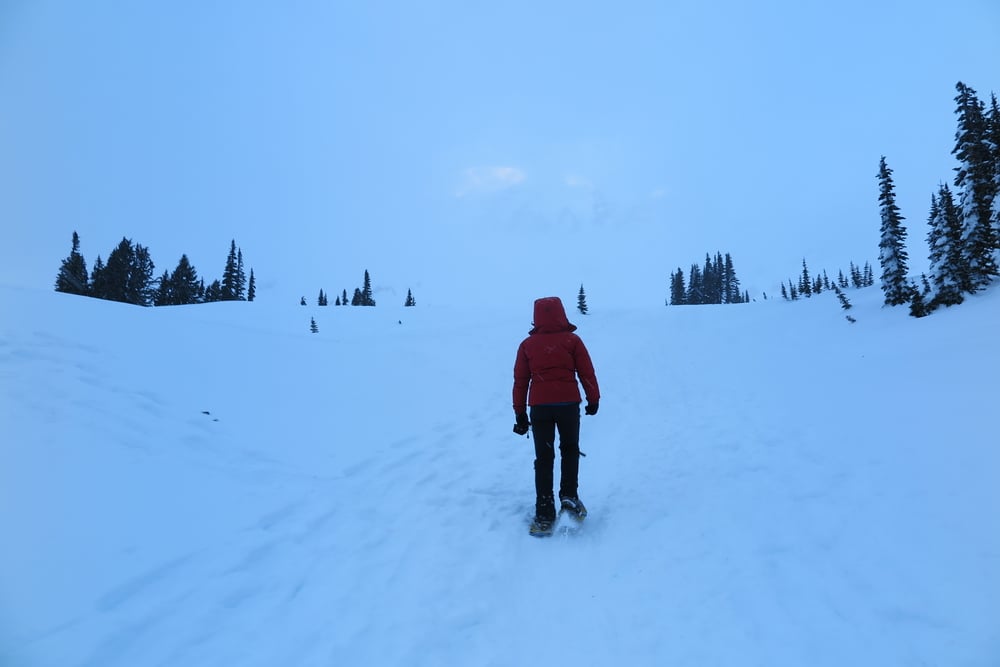 Walking towards a cloudy Mt. Rainier – the summit can be seen (slightly glowing) in the distance. 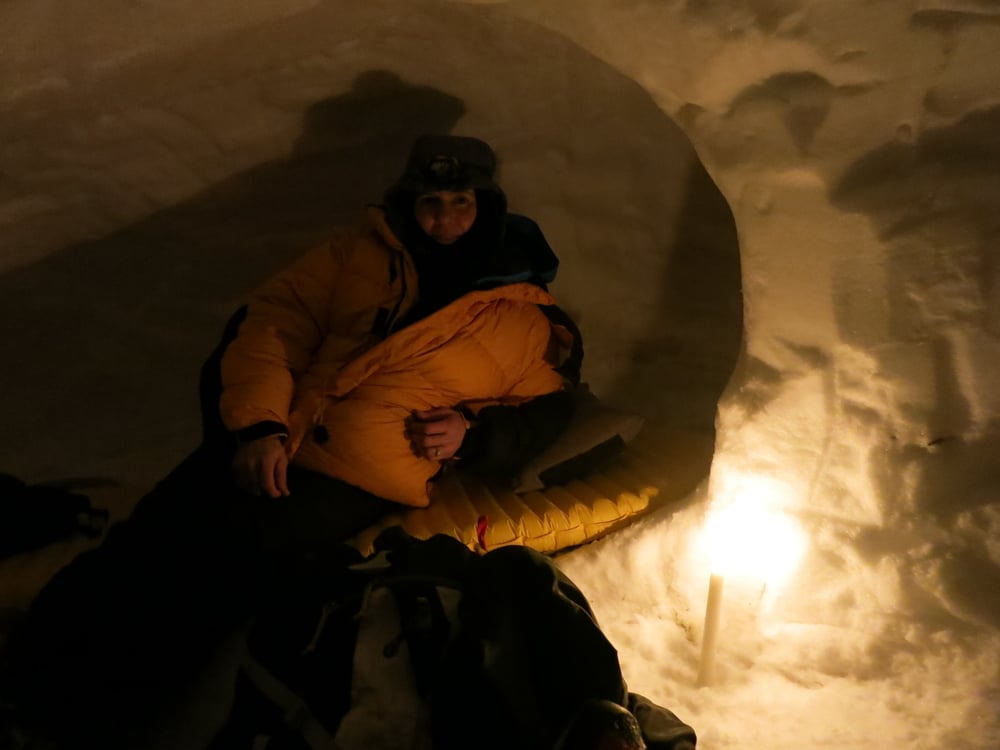 Brenda, in her cozy snow cave “nook” by candlelight.

With one puff, the lone candle was extinguished and our cave was immediately transformed into a cold black abyss.  I blinked, to no avail, trying to adjust my eyes to the inky darkness. Initially, I feel asleep relatively quickly – only to be awoken shortly thereafter by Brenda, who was poking at the air vent.  She expressed concern that the vent wasn’t large enough, and that it was possibly facing the wrong direction – she said she couldn’t sleep if she didn’t fix it.  So, Brenda headed outside to poke a new, better air vent.  Lying in a snow cave, and listening to somebody walk around above you (even though they are not actually directly over you), it literally sounds like a 300lb Yeti is jumping up and down on the snow directly above your face. As I listened to Brenda up above, and I saw snow falling through the vent, I felt a small knot develop in my stomach – I started to imagine that there was absolutely NO WAY that snowflakes (MERE SNOWFLAKES), could withstand the weight of a human being.  When she re-entered the cave, now satisfied with our air vent, I lay paralyzed on my sleeping pad and my mind, regrettably, started to wander.  I started to worry that maybe the air vent wasn’t big enough – that we would suffocate to death in our sleep.  I tried to convince myself that I would feel short of breath if I were suffocating – but then I remembered that the feeling of needing to take a breath is actually triggered by the need to release carbon dioxide, NOT the need for oxygen.  In addition to my concern about suffocating, I started seeing recent Pacific Northwest news headlines flash before my eyes – “The Northwest’s Nearly Annual Earthquake is Underway”, or “Effects of Silent Quakes Still a Mystery to Northwest Scientists”.  I tried to convince myself that I was being crazy, “Surely what are the chances of an earthquake taking place while you are camped in a snow cave under 3 tons of snow on the side of an active volcano in a location with one of the most dangerous faults in the history of the world?”, but nothing I said could self-soothe my blossoming paranoia. 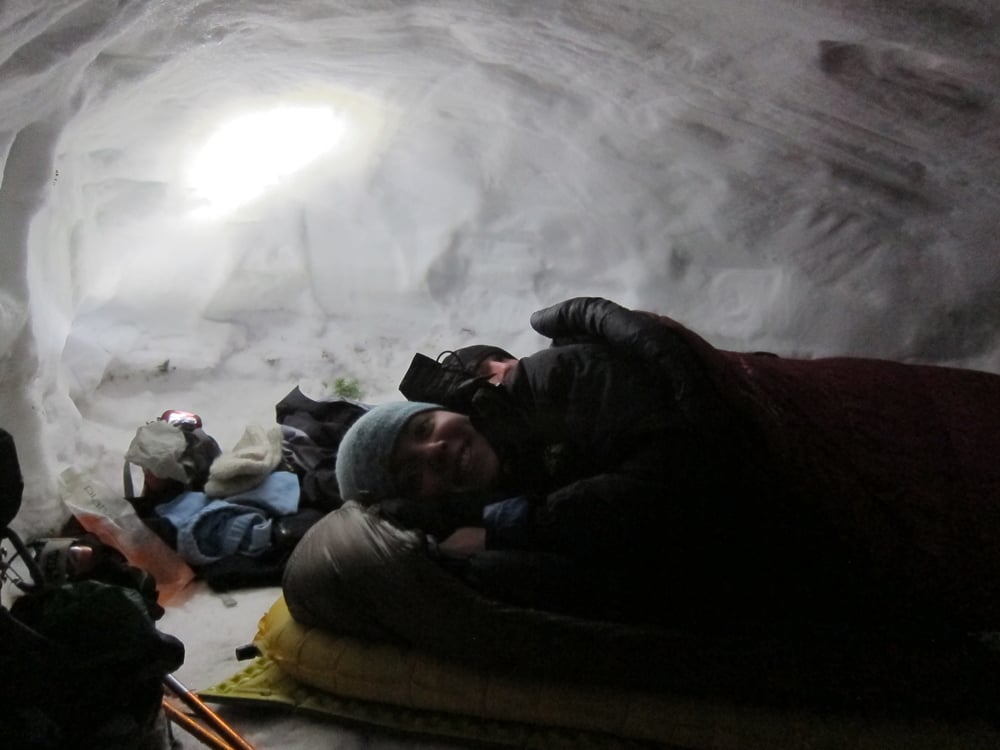 Pre-freakout smiles in the cave.

As the night progressed, I became more and more convinced that the snow cave was a bad idea.  At one point, somewhat paralyzed by anxiety, I thought it might be a good idea to drag my sleeping pad outside to sleep in the frigid air – at least I would be safe out there!  Lying underneath 5 feet of snow (which was seemingly levitating above us), I decided that I needed to sleep with my arms in a hamster-like position near my chin – so that in the event that I became buried, I could at least burrow a small air pocket to breathe.  Meanwhile, I could hear Aaron snoring comfortably on his sleeping pad – seemingly unaware of the increasing danger that we were imminently facing with each passing second.  Finally, I realized that the fictional scenarios that I had created in my mind needed to stop.  I took a few deep breaths, and I did what any good American would do in my situation – I started to plan what I would do when we won the $1 billion Powerball jackpot.  From inside our tiny cave on the side of Mt. Rainier, I planned out the entire process – the call to my financial advisor, the securing of an attorney and/or creating an LLC to keep my identity anonymous, and how to tell our families.  We would buy a luxurious, but not ostentatious, home somewhere in the mountains – with a view, of course.  I envisioned a gourmet kitchen with a Viking gas range and granite counter tops.  Our bedroom  would be surrounded in windows and skylights to absorb the landscape – and the master bathroom would have heated floors and every single type of rain- inspired shower nozzle in existence.  Finally, I decided that I would design and build an outdoor terrarium for our two cats, Niko and Cinder.  The space would have glass slanted walls, so that they could look at passing critters and birds, but not escape into coyote territory – and it would be filled with driftwood trees and toys.  As I lay there, surrounded by billions and billions of compressed snowflakes, I smiled – the thought of our two cats running around our beautiful house in the mountains made me forget the ever present danger of the snow cave.  And so, with Niko and Cinder sliding around in my mind on hand-planed walnut flooring, and Aaron and I sipping on glasses of Pinot Noir from our mountain-view balcony, I gently drifted to sleep in the cave. 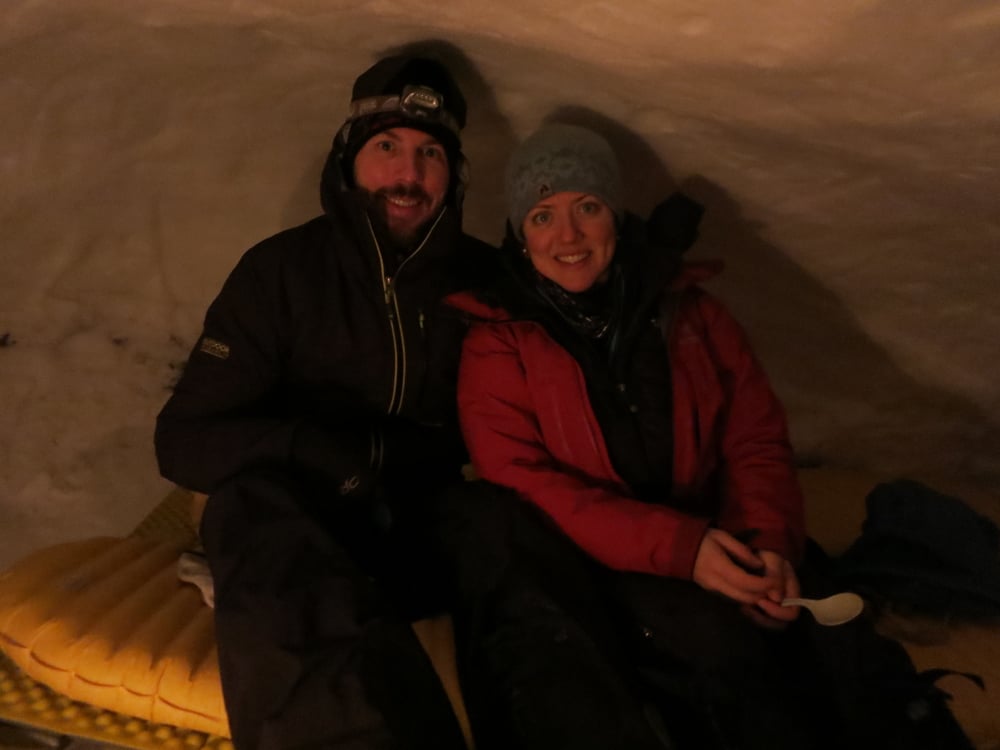 Years ago, I listened to a podcast that featured an interview with a man who worked for a lottery consolidation company.  The man thought that he would be communicating regularly with some of the happiest, most carefree people in the world because… well… they had just won the lottery.  Who wouldn’t be ecstatic about life after winning the lottery?  But the man was shocked – every single person that he encountered shared one common wish – the wish that they had never won the lottery in the first place.  The said it had ruined their relationships with their family and friends.  It had caused them to become paranoid for their personal safety – many of the lottery winners isolated themselves at home and purchased elaborate security systems and were afraid to venture out, for fear of being kidnapped.  Other lottery winners said that they couldn’t handle the “friends” who had seemingly appeared out of nowhere – everybody hoping to cash in on their “good luck” (although most of the lottery winners felt it was more like a curse).  I remember listening to that podcast and thinking, “No way…I would love winning the lottery – I’d give so much money away and it would make my life so much easier and better.”  I had such a hard time understanding why people who were suddenly and unexpectedly blessed with hundreds of millions of dollars would be miserable. 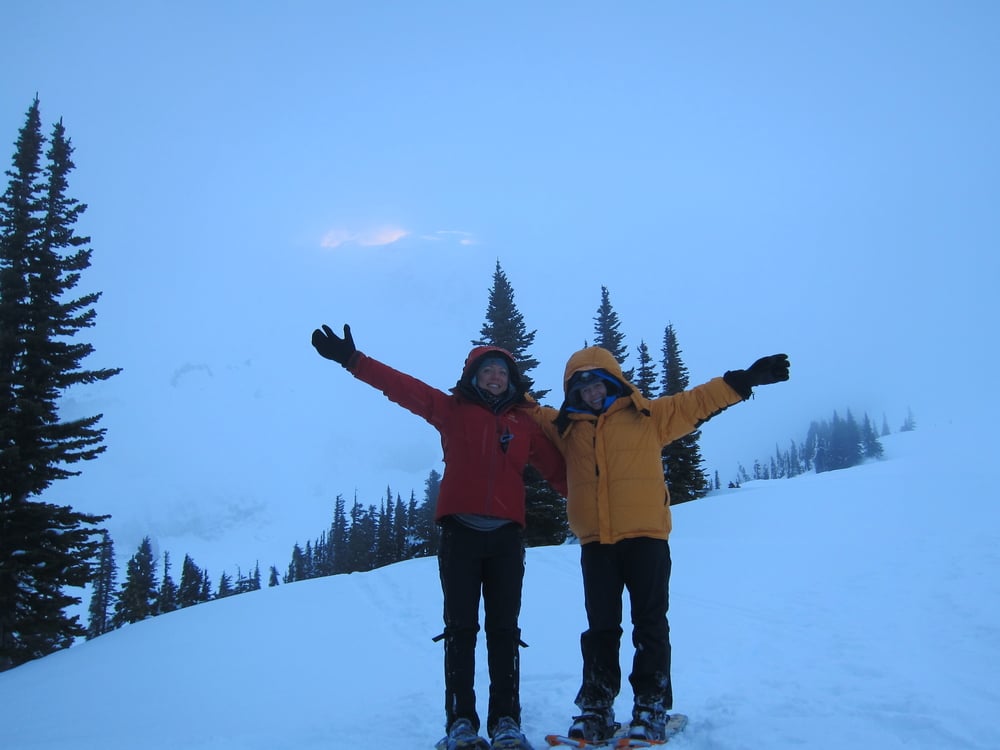 Brenda and I on our evening hike – pre-attempting-to-sleep fiasco.

I’m happy to report that I woke up completely alive and unharmed the next morning, after getting a partial night’s sleep in our cave.  Groggy, we stumbled out of the cave and as we sipped on our hot coffee in the brisk morning air, we laughed at the fact that an earthquake and suffocation had crossed all of our minds that night.  Brenda admitted that she felt a lot better after adding the second air vent.  I talked about my Powerball win, and designing the cat-terrarium.  Aaron said that just before he fell asleep he briefly thought of the recent earthquakes in the Pacific Northwest and thought, “Well, that would suck.”, decided he couldn’t do anything about it, and promptly fell asleep.  As we finished our warm drinks,  Aaron quipped, “What if they had recovered our bodies and found the winning Powerball ticket in my pocket?”.   We laughed and laughed as I lamented the loss of my thoughtfully designed cat-terrarium. 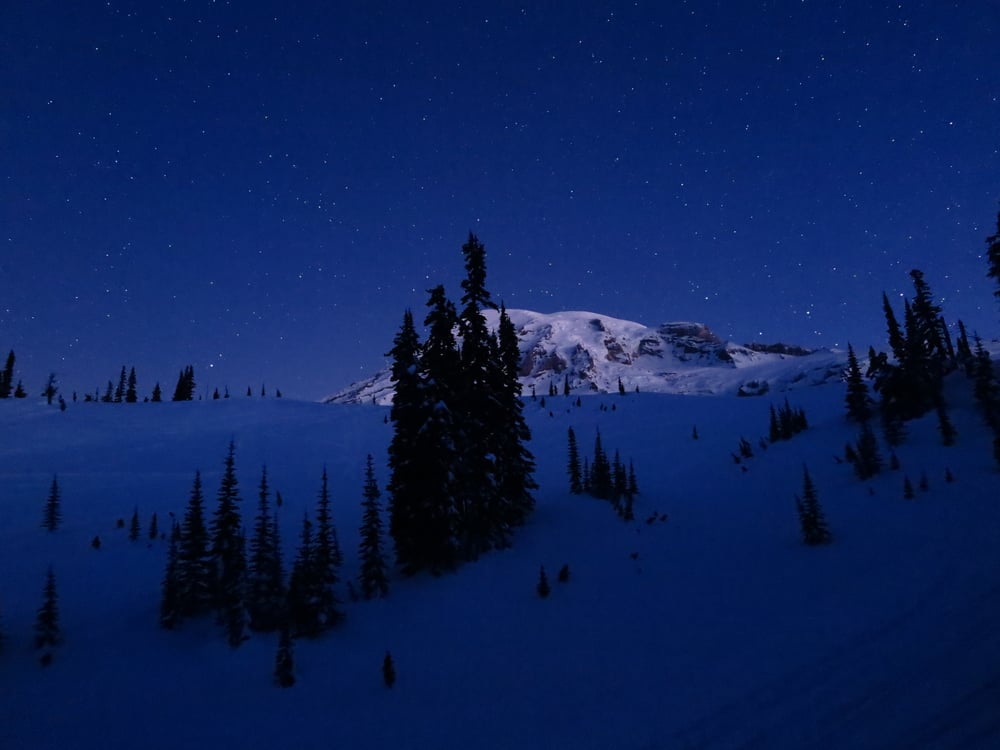 Earlier that morning, I had left the cave while it was still dark – I braved extremely cold fingers to take some photographs of the stars shining above Mt. Rainier.  Shockingly, the clouds had parted and it was a perfectly clear morning – billions upon untold billions of stars sparkled in the sky above me – the only sounds were the crunching of my feet on the snow and the soft hissing of my breath.  Surrounded in silence, staring at the mountain, my heart was full.  Just before sunrise, the three of us plodded up the hill in our snowshoes to get a closer look at Mt. Rainier, which was completely drenched in a strawberry pink glow.  We weren’t going to climb the mountain this time, of course, but there is a certain draw to its presence – an indescribable need to get as close as possible to it, for fear of missing something beautiful. Together, we stood in silence at the top of a small knoll – our eyes hungry for each moment that was unfolding before us.  As the sun burst through the trees, a brilliant golden glow spread onto the landscape and the snow shimmered like diamonds beneath our feet.    As I looked around, I realized what I’ve known all along – the riches that we look for in life are here now.  They are around us in every second of every day – in the people we love, the moments we share, the beauty we see.  No amount of money can ever come close to purchasing the things which give our lives true meaning.  You don’t have to sleep in a snow cave to win the lottery – I assure you, it’s much easier than that.  Go outside.  Do something adventurous.  Be with people you care about.  Explore.  Breathe.  Love.    The odds are in your favor every time. 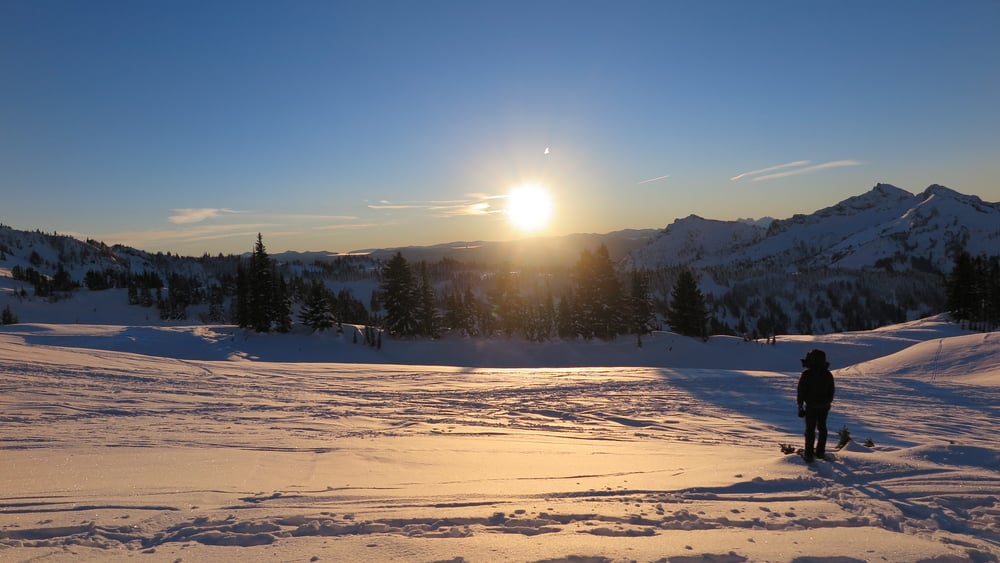 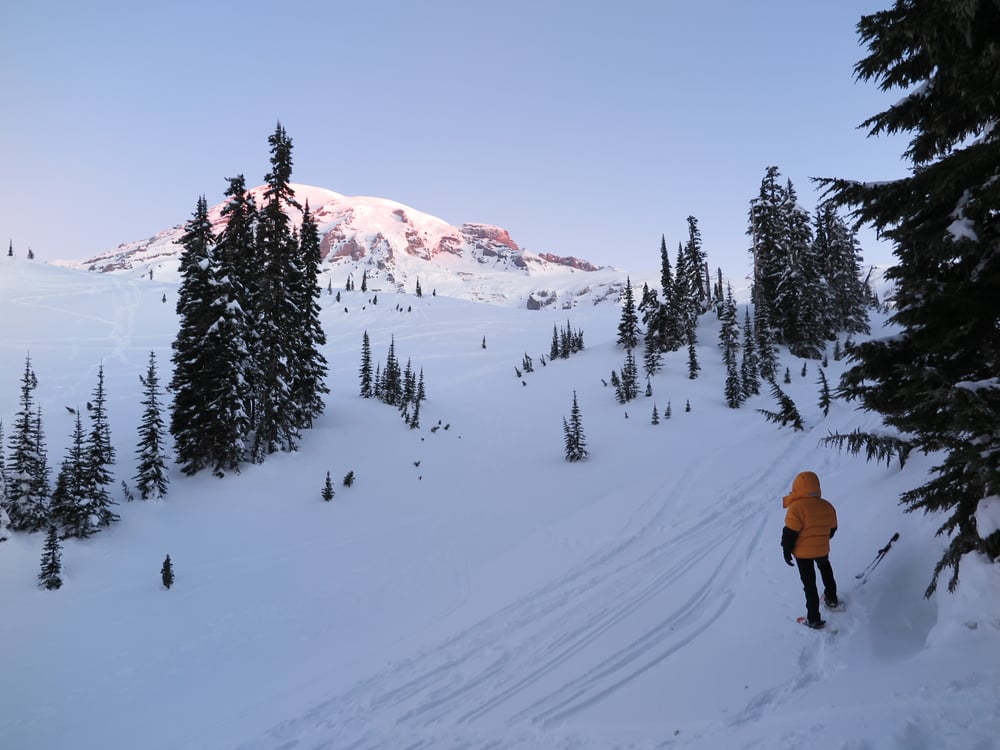 Our morning snowshoe, just before sunrise.