Posted at 22:41h in Personal Reflections by Anastasia Allison 0 Comments

The first time I ever looked at a gun was in a sporting goods store when I was 16 or 17 years old.  I was peering hesitantly through the glass counter top, and the sales clerk asked me if I wanted to look at one, “Really?”, I asked with a shaky voice.  He gently took a revolver out from locked glass cabinet, showed me that it was unloaded, and set it on the counter.  I reached out and poked it with one finger – absolutely terrified that it was going to somehow shoot me back.  Amazingly, it just sat there.  My heart was literally pounding in my chest as I cautiously picked it up and looked at it – the man behind the counter could tell that I was nervous and he offered reassuringly, “It isn’t going to hurt you!”.  I was unconvinced – I set the gun down on the counter and walked away – still feeling relatively panicked. 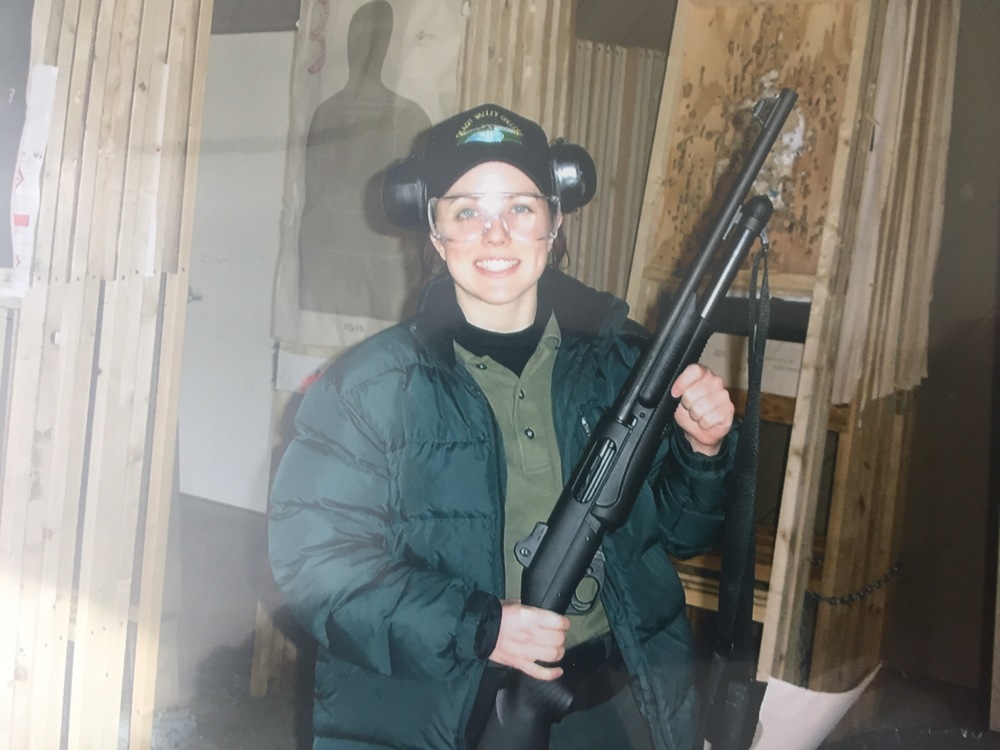 Throwback to 2005 … looking very puffy and holding a shotgun incorrectly.  This was my first time ever firing a 12-gauge shotgun.  I was so nervous I almost puked.

It wasn’t until years later, that I had my first (horrible) opportunity to shoot a real gun.  I was at a New Years Eve party in the middle of nowhere, and somebody thought it was a good idea for me to shoot a .44 magnum revolver.  I had no ear or eye protection on, nobody showed me the proper stance or how to hold the gun.  As I squeezed the trigger, the sound was deafening – the gun kicked back so hard that I smacked myself in the face – which, sadly, I think had been the point since everybody at the party seemed to feel that this was absolutely hilarious.  Needless to say, I was not impressed.

Fast forward a few years, and I became a student at the police academy.  I remember my first day of firearms training – an instructor informed the class that, “women struggle with grip strength”.  Not only did I reportedly jump approximately 3 feet in the air when I shot the first bullet out of my Sig Sauer pistol, but I also spent my ENTIRE time in the academy obsessing about how “weak” my grip strength was.  I filled spare gaps of time with squeezing tennis balls and purchasing strange hand strength contraptions.  When I had poor firearms qualification scores, I blamed it on my “weak grip strength”, and decided I needed to train harder.  I managed to pass my qualifying tests (barely), but mentally, I was not confident – I was convinced that I was a horrible shooter.

Around this time, I met Nathan Poplawski – he was a firearms instructor with my agency, and he saw that I was struggling.  Immediately, he realized that most of my problems were a result of poor mindset (for the record – women DO NOT have weak grip strength, in fact, women are traditionally great at shooting!), bad habits and a nervous trigger pull.  He had me start from the beginning – I practiced S-L-O-W draws … I would literally draw my gun so slowly that it would take 15 seconds for me to acquire my sights on target.  Gradually, I sped up the process, until I was performing nearly flawless draws every time.  Then, instead of worrying about the “BOOM” from the gun, I started repeating a mantra in my head – “keep pressing, keep pressing, keep pressing, keep…BOOM!!!!”.  When the gun went off, it was always a surprise – but I wasn’t “jerking” the trigger in anticipation of being startled anymore.  My qualification scores went from hovering around 354 (350 was passing!) to jumping up to 484 (out of 500) at my best.  I was confident.  When I went to the range, there was never a trace of doubt about how well I would shoot.

I’ve known Nathan now for nearly 10 years – in fact, I even played my violin at his wedding to his beautiful wife Bobbee (cool fact – I played the Star Wars Imperial March as Nathan was walking down the aisle).  Not only is Nathan a phenomenal firearms instructor who is single-handedly responsible for dragging me out of my dark abyss of low-confidence shooting ability, but he is also a great person and a great friend.  He now owns a shooting school in Ephrata, WA called Central Basin Shooting school, and for Christmas I gifted a defensive handgun class to myself and my husband.  The night before our shooting class, Aaron and I had a wonderful dinner at his home, and spent the evening laughing until we cried.  He and his wife are welcoming, loyal and some of the most kind people I have ever met.  I am so blessed to have both of them in my life as friends, and so glad that Aaron had the chance to meet them. 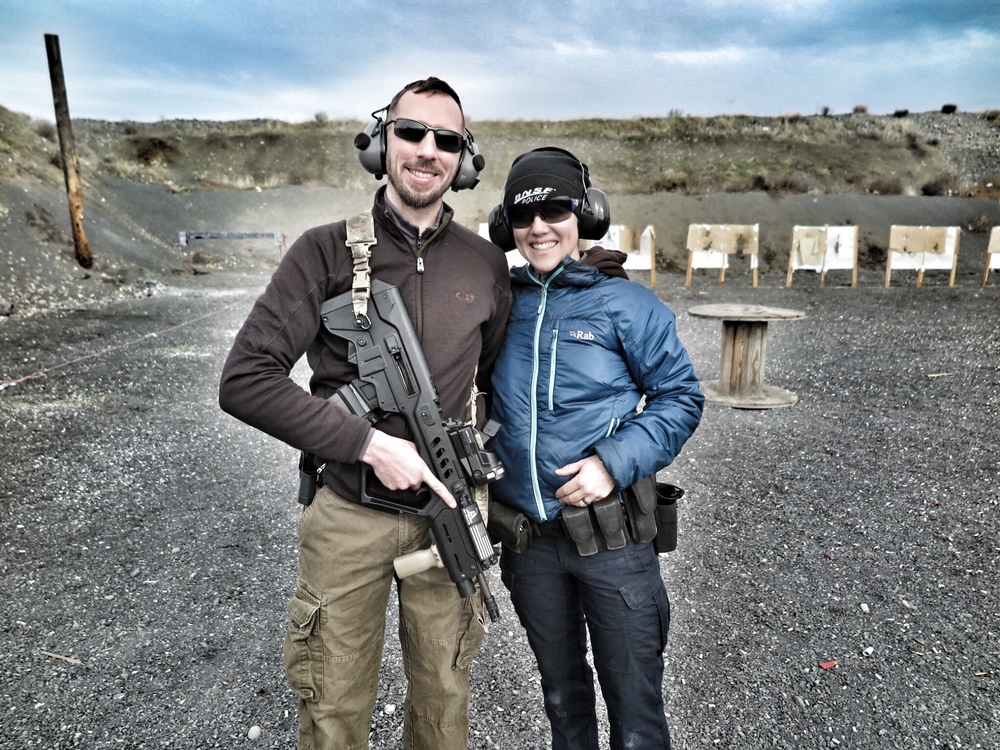 The couple that shoots together….

Since my police academy days, I’ve had some phenomenal firearms training, so I was excited to practice the basics and refine my skills a bit more.  Aaron had never had any official firearms training (only shooting at bottles in the middle of nowhere and some hunting as a kid), so the “defensive” aspect of this course was completely new to him.  Nathan spent a lot of time going through the firearms safety rules and also talking about the law and when it is lawful to actually use force in the State of Washington. 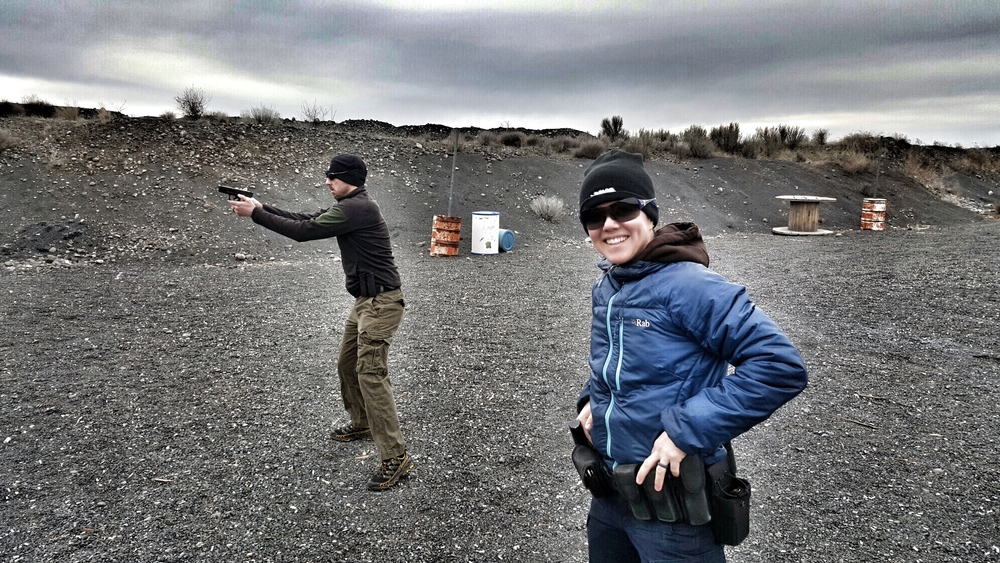 Off to a good start – throwing some brass down range!

The fun part, however, is putting some rounds down range.  We started slowly – practicing our drawing without shooting, but quickly moved into getting rounds on target.  Aaron was pushing some of his shots to the left, so Nathan watched him closely – made a few adjustments to his grip – and suddenly Aaron was shooting dead center.  I’ve been shooting now for over 12 years – I’m not afraid of guns anymore, but I have a healthy respect for them, and I consider carrying one an absolutely massive responsibility.  Being trained in proper usage is critical – it takes years and years to develop the muscle memory required to clear malfunctions, acquire a good sight picture and to make tactical decisions while shooting. 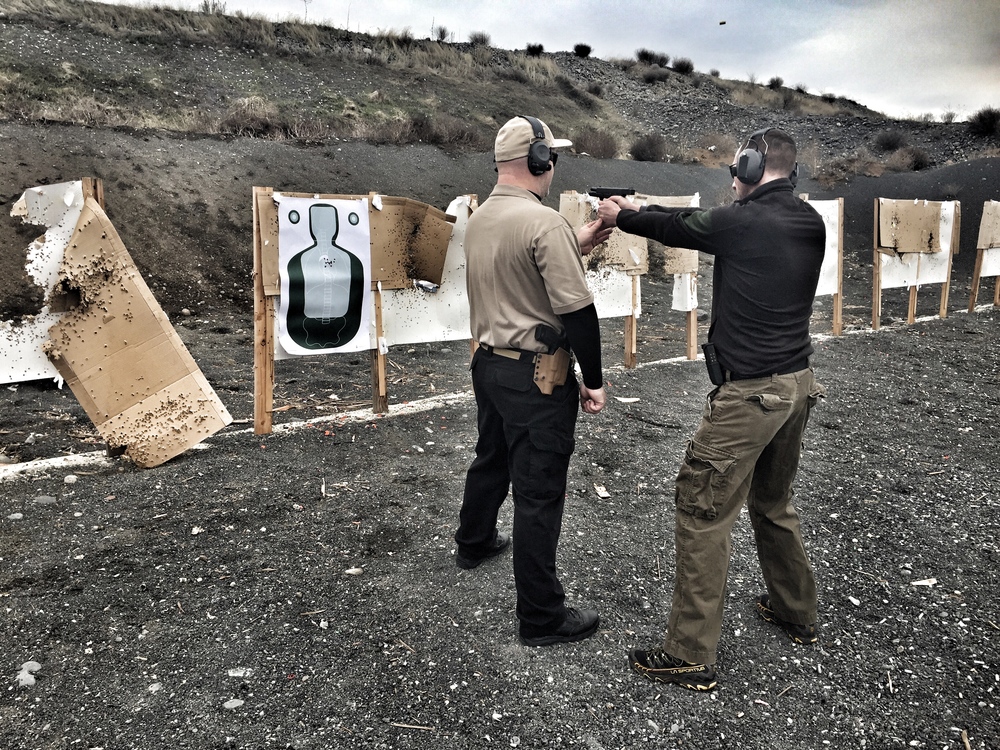 While it might seem a bit odd, I find shooting extremely soothing – when you are on the range, you have to be completely focused on absolutely everything that you are doing.  Every movement of your hand, every placement of your feet, every twitch of your finger, every inhalation and every exhalation is in control in order to maintain not only accuracy, but also safety.  Not only did Nathan make sure that our training was safe, but he kept it fun.  At the end of the day we took turns shooting a Tavor rifle, which was really exciting.  Our final “drill” of the day was a steel shooting competition.  Aaron beat me on the first 3-4 rounds, and I won a few rounds too – talk about some fun “couples bonding”!  On our last course of fire, Aaron told Nathan that he only had three rounds left to knock down the three small steel targets (we were shooting from 15 yards).  Nathan grinned, “Well, no problem then – one bullet for each target!”  Confidently, Aaron knocked down all three targets with his remaining 3 bullets – it was an awesome way to end the day. 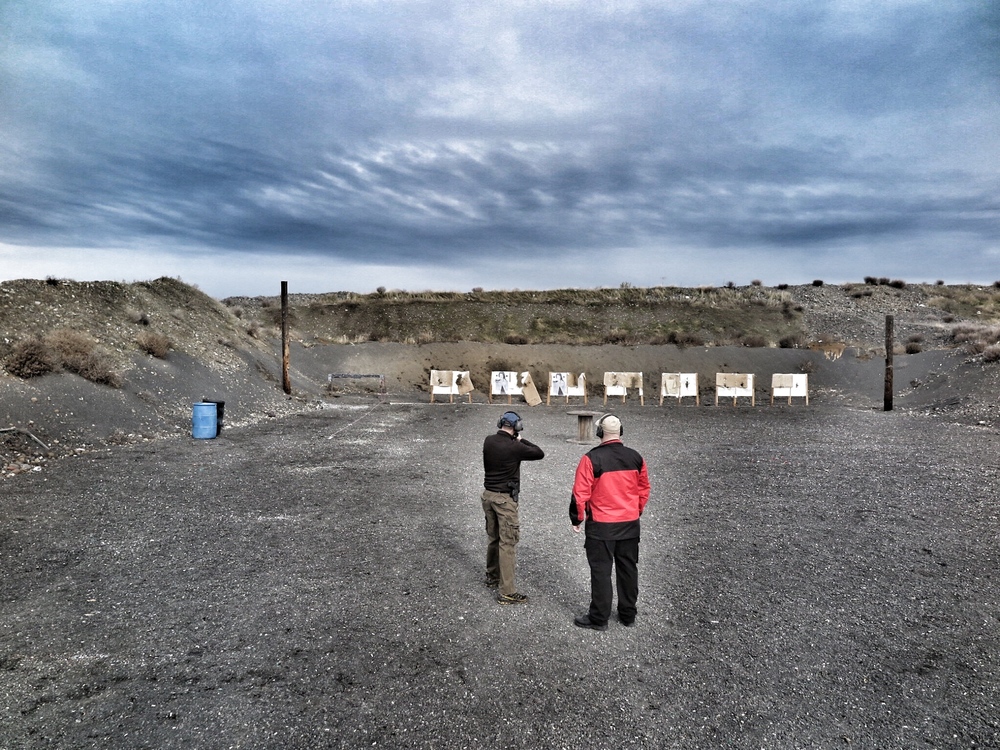 Getting in some rifle practice at the end of the day.

I’m fortunate enough to go to firearms training quite a bit at work, but it was so much fun to attend a class with Aaron.  Nathan ran a beautifully programmed class with great information, perfect attention to safety, a customized approach to training each person based on their personal needs, and perfect timing to end the day on a high note.  I’ve attended training before where I am so tired at the end of the day that my hands are shaking and I can barely hit the broad side of a barn – it can be demoralizing, instead of a confidence booster.  When Aaron and I got into the car after our day on the range and headed back to the wet side of Washington, I knew it had been a perfect training day – a little red faced from the sun and wind, the smell of gunpowder in my disheveled hair, and a husband who breathlessly exclaimed, “THAT. WAS. AWESOME.”  Yep, that’s how you know it was great. 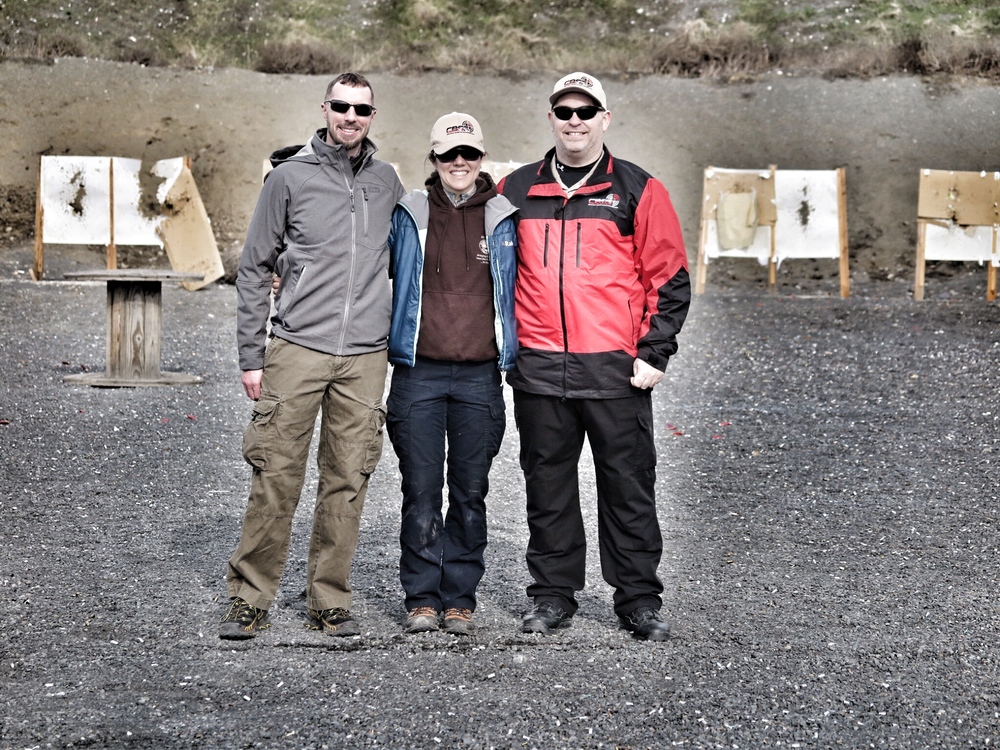