Posted at 21:26h in Personal Reflections by Anastasia Allison 12 Comments

I love the idea of a reset.  A refresh.  A new start.  A time set aside to clear out all the “noise” and focus on being in the present.  This weekend my husband and I did something that we had been talking about for awhile – we climbed the 2nd largest volcano in Washington State as a “dayhike”.  The majority of people who climb Mt. Adams typically divide up the nearly 7000′ of elevation gain into two days, but we wanted to see if we could do it all in one shot.  Turns out, we could. 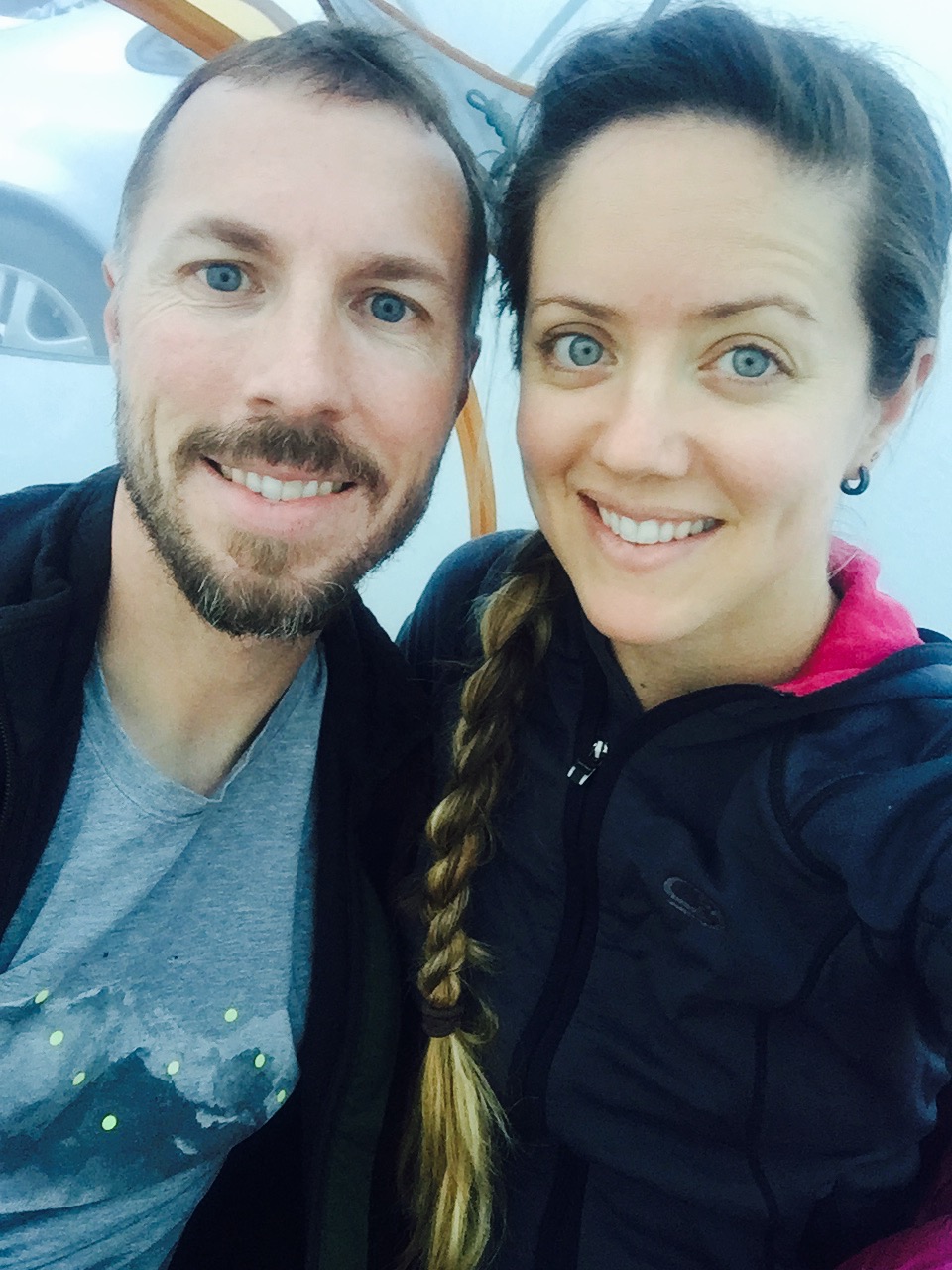 In our tent at the Morrison Creek Campground … about to attempt to sleep before the alarm goes off at 0130.

We started our trip by driving a few hours to the Morrison Creek Campground.  For the record, I drive a tiny little Honda Fit (with 150k miles on it, I might add), which has remarkably morphed into an off-road vehicle of sorts.  The road in this campground was severely rutted, and it is a miracle that I didn’t get my little buggy high-centered.  We quickly set up our tent, ate some cold left-over gluten free pizza, and settled in for the night.  Surprisingly, I feel asleep instantly for about two hours, until I woke up at 10:30 PM to what appeared to be somebody standing directly over the tent shining in a flashlight on us.  This is a very remote campground, and there were only two other campers in the vicinity, and I couldn’t possibly imagine why they were shining a light on our tent (other than that they were about to murder us, obviously).  I lay very still, barely daring to breathe, until the light flicked off and the person (or flashlight-bearing Sasquatch), went away.  Needless to say, it was a little weird.

I drifted into another short bout of sleepiness, until I was roused yet again from my sleep by a loud, echoing “chirping” noise, which was quickly followed by  the most blood-curdling scream I have ever heard.  The screaming was almost paranormal – but it distinctly sounded like a woman being tortured, and thought I heard the word “HELP”.  From my vantage point, it sounded like the screaming was coming from just outside of the campground on the main road up to the Mt. Adams climbers trailhead.  Panicked, I thought that the flashlight-lurker from earlier must have struck a victim – except that it made no sense – why was some random woman out on the road screaming at midnight?  Was she lost?  Who was torturing her?  The screaming stopped, and in my semi-comatose state, I started to question if I had even heard it, or if it had been a part of a dream.  I heard Aaron stir, and I told him what I had heard.  Suddenly, more distant than before, we heard another scream.  Aaron, who was barely awake, told me it sounded like a cougar screaming.  I wasn’t sure if I should feel relieved about that or not, but a cougar seemed like a much better option than a savage murderer.  Mercifully, I managed to finally fall asleep for a whopping 45 minutes before the alarm cruelly reminded me that we were  supposed to climb a mountain today.  Ugh. 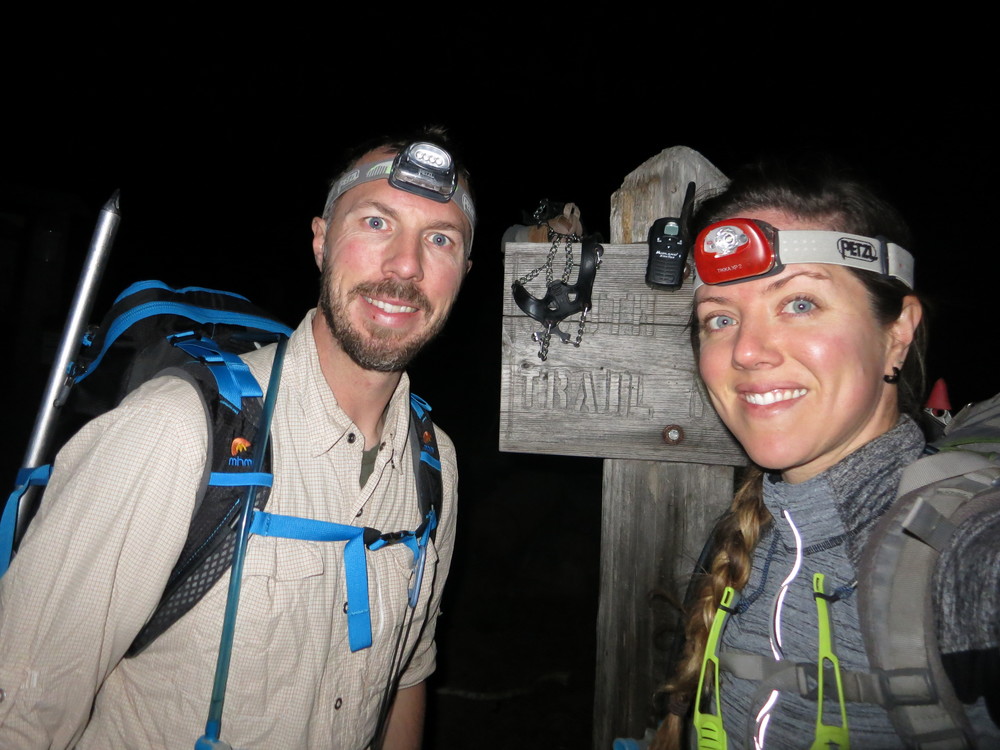 I felt like I was really dragging right out of the gate, however, that might have been because I was actually dying from hiking so quickly.  Aaron kindly informed me during hour two that I had started off from the trailhead, “pretty much at a jog.”  I’ve always loved hiking in the dark – and this was no different.  With just the light from my headlamp bouncing over trees, rocks and the trail in front of me, it has a tendency to take me to a place of being in almost a zen-like state – not agonizing about the massive mountain ahead or getting anxious about the steepness of the slope to my left – just taking steps and breathing, listening to the beating of my own heart, that’s all that really exists.  At one point on the approach hike, I saw two gold beams reflecting back at me – eyes!  A giant, gentle doe stared at us – probably wondering what two crazy people were doing hiking up this giant mountain in the dark.  We stopped for a few minutes to watch her, before she silently slipped away back into the trees. 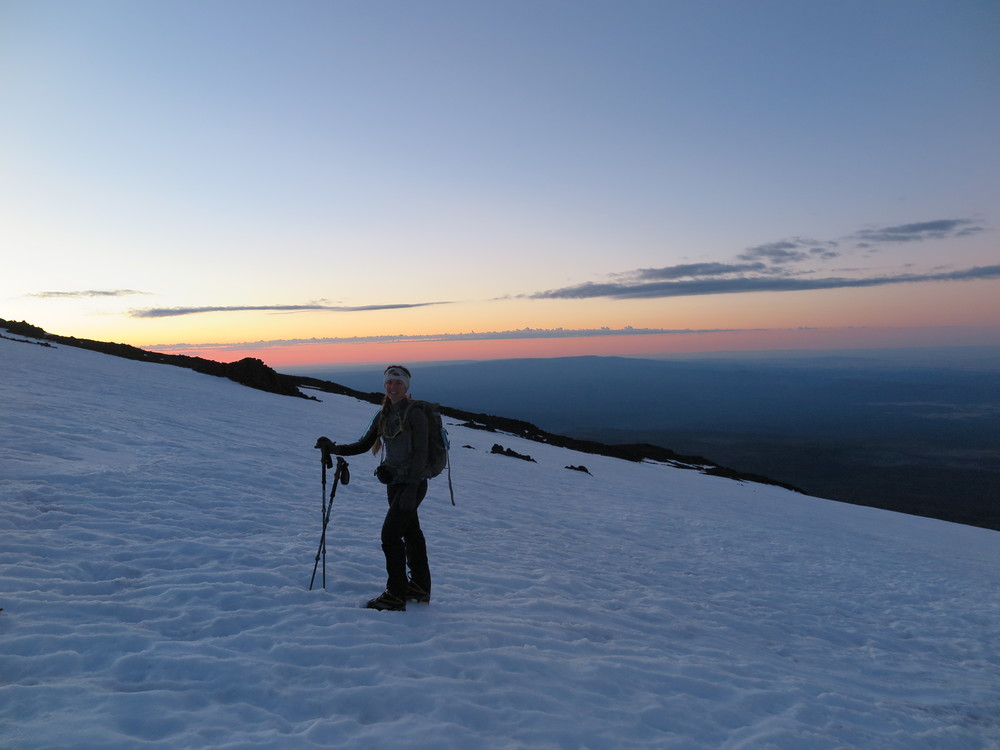 On the lower slopes of Mt. Adams just before sunrise.

We mechanically plodded up the long, seemingly endless snow slopes of Piker’s Peak, the false summit of Mt. Adams.  This slope is extremely long and extremely boring.  I felt like we were going at a snail’s pace, but we must have been going at least at a consistent snail’s pace.  We passed 4 other groups on the way up who appeared to be seriously struggling with the, “take two steps and then take a 5 minute break” method.  At the top of Piker’s Peak, we both felt a bit “woozy” and stopped to refuel and give our “much-heavier-feeling-than-normal” legs a break. 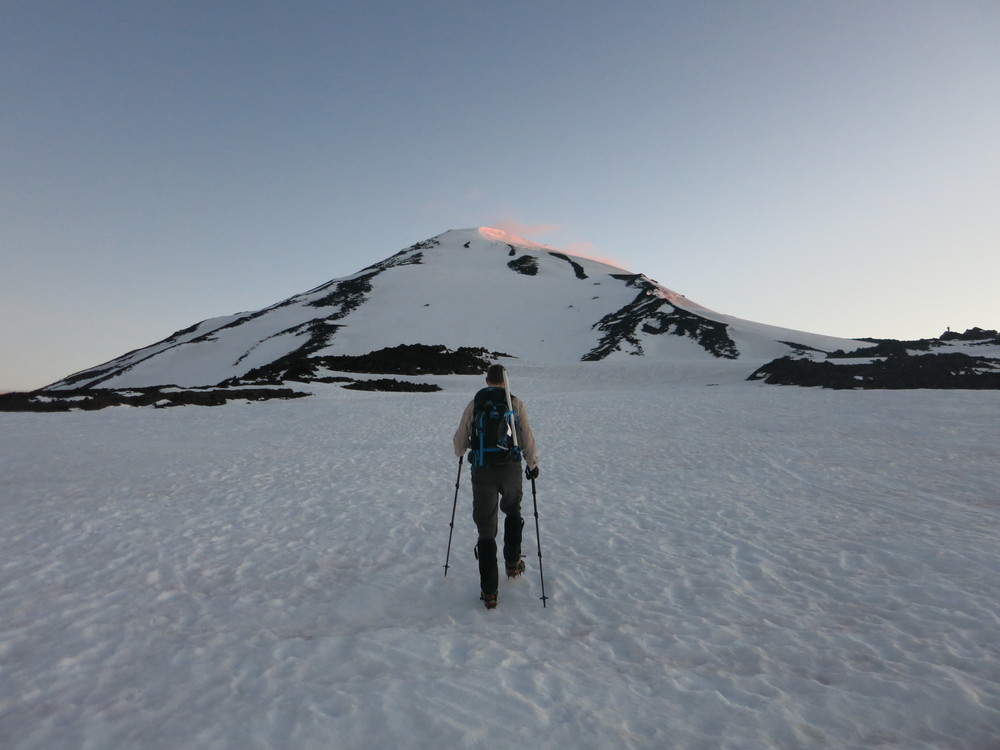 Aaron walking towards the snow slope that leads to Piker’s Peak, the false summit of Mt. Adams.

The section after Piker’s Peak is probably my favorite part of the climb – because it’s flat.  But really, it’s also gorgeous.  It is a beautiful, sweeping traverse and it is a much-deserved rest before the last 1000′ of climbing to the summit.  On the day of our climb, Mt. Adams was swirling in a lenticular cloud, which made the traverse and the summit completely ominous and different than I had ever experienced.  This was my fourth time on the summit of Mt. Adams, and it was just as awe-inspiring as the last three times. 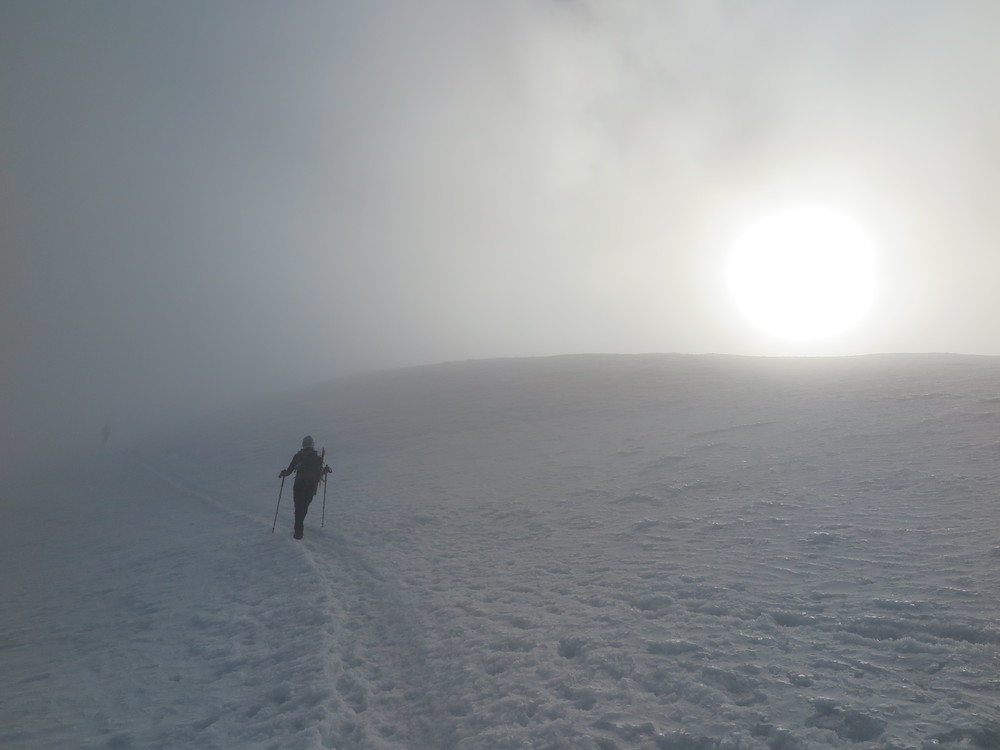 Traversing from Piker’s Peak to the final summit push in a cloud – with the sun just barely breaking through.

The last 1000′ to the summit was mostly accomplished in “extremely slow auto-pilot mode”.  My brain was clearly communicating with my limbs to move, although the rate at which it was doing so was drastically reduced from my “nearly jogging” pace earlier in the morning.  Each step, each breath, each beat of my heart felt somewhat labored due to ascending above 12k from sea-level in one day.  For those that live at altitude, this might not be as much of an issue, but when you reside at 233ft above sea-level, and then you rush up to 12,276′ in 5 hours, the effects are relatively noticeable.  It’s actually a very strange sensation – my legs and body didn’t feel particularly tired, but I literally could not move any faster, no matter how hard I tried. 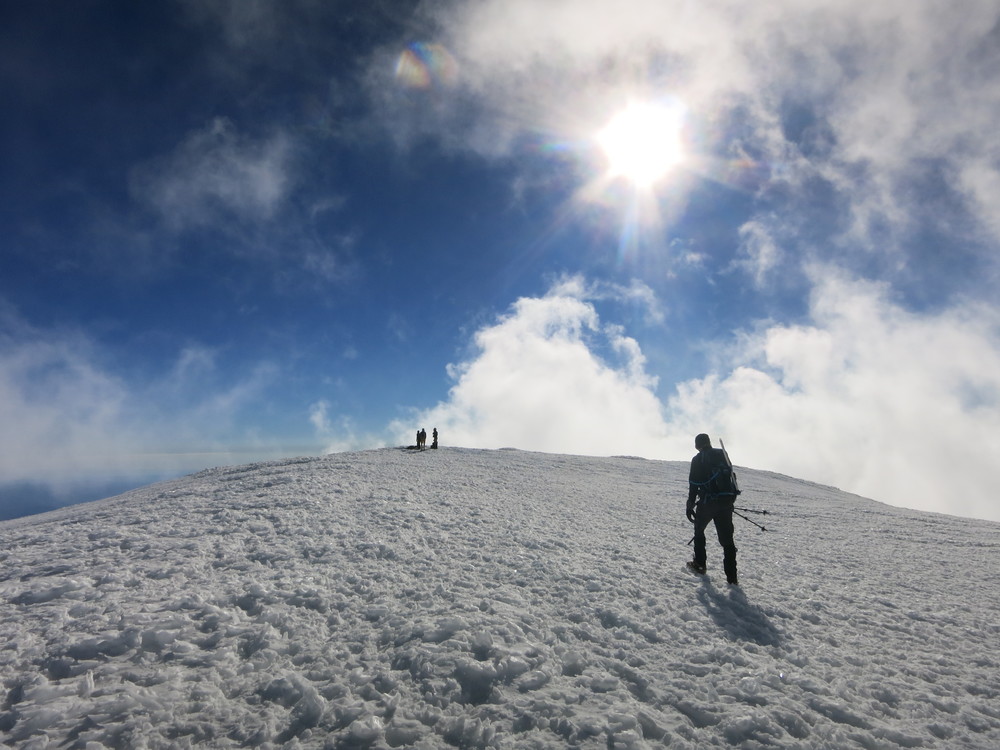 Aaron, walking the final few steps to the summit just as the clouds parted momentarily.

Our brief stay on the summit of Mt. Adams felt like a dream.  Five hours after leaving my car at the trailhead at 2:30 AM, we were standing on the summit of this massively beautiful volcano – the frigid air and clouds swirling around us as we hurried to take a few photos and revel in our success.  A few minutes of absolute nothingness – no walking, no more uphill steps, no more labored breathing – just us, being there in that moment in time – existence in its purest form.  And just like that, we were walking back down the mountain.  We stopped for a 45 minute “nap” at the base of Pikers Peak – lying against the warm rocks, nibbling on trail mix.  Soon, we headed off again… plodding away, sliding down the glissade tracks, away from the snow, back into the trees, onto the dirt covered trail – until we saw the shiny reflection of cars in a parking lot down below us. 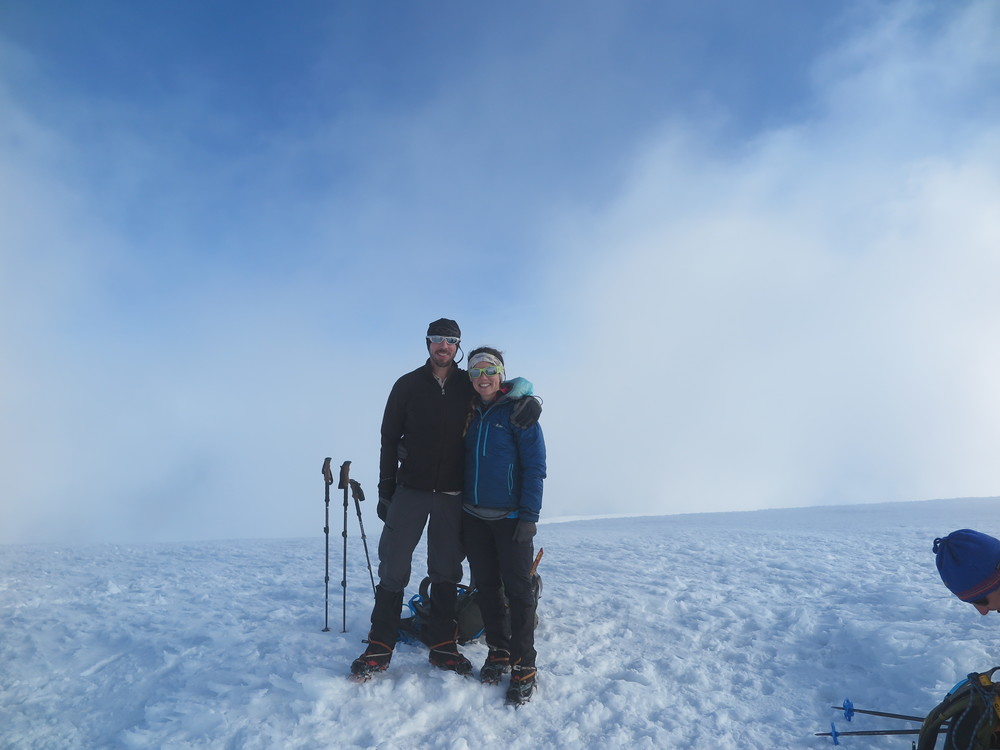 Our second time on the summit of Mt. Adams together, and some guy’s head.

It took us around 9 hours round trip (including our nap) for us to climb Mt. Adams.  Later on in the day, the entire experience seemed like it didn’t happen – as if time had been somehow warped, and the entire event had been part of an extremely realistic dream that left us feeling very exhausted.  We stayed at a hotel near the trailhead (so that I didn’t have to drive home so fatigued), and while we were eating our celebratory burgers I asked, “Did that really happen?  Did we really just climb Mt. Adams this morning?”  When we both stood up from dinner, our sore legs gave a little “Oooomph” … letting us both know that it had indeed happened.

Glissading back to the rest of the world.

Coming back to the “rest of the world” can be such a challenge.  Nine hours immersed in an extreme form of meditation has a way of clearing the brain – so much so, that coming back to things like cell phones and Facebook notifications can seem, well, almost… painful.  It’s too much, too quickly.  It’s overwhelming.  You would think that climbing a volcano would be overwhelming, but I’ve learned that it is completely the opposite for me.  I need these “reset” days to remind me what I love – the wilderness, fitness, health, spending time with people that are the most important to me.  But sometimes they make it hard for me to assimilate back to the demands that we’ve made for ourselves in a world of insta-communication.  Mountain climbing is simple – take a step, breathe, take a step, breathe.  Nine hours of pure peace is something that we don’t experience very often anymore.  The world away from the mountains – that’s the difficult, confusing and sometimes chaotic place.

Mountains have their own chaos – a cougar scream echoing through the night, steep snow and ice, a turbulently frigid lenticular cloud – but I find that this type of chaos is far easier for the brain to process.  We might not be able to escape the pressures of our modern day “responsibilites” indefinitely by going completely off the grid, but we can temporarily replace them with simpler, less crowded thoughts.  Feeling slightly bummed that our climb was finished, and needing to move my legs around, I went on a walk today and realized that I can have a “reset” anytime I need it.  I went for a walk around a lake – some geese hissed at me, a few raindrops pelted my face, I ate a few huckleberries.  Suddenly, the “noise” was quiet – I was immersed in the moment, and it was literally in my own neighborhood.  You don’t have to climb a volcano everyday to experience a  reset – just getting outside, feeling a trail underfoot, smelling the clean air, being caught in a rainstorm, riding a bike, running in a field for no reason at all – just “being” instead of always “doing” or “going”.  In a world that is totally addicted to media and technology, slowly, but surely, your brain will begin to thank you… and begin to crave more. 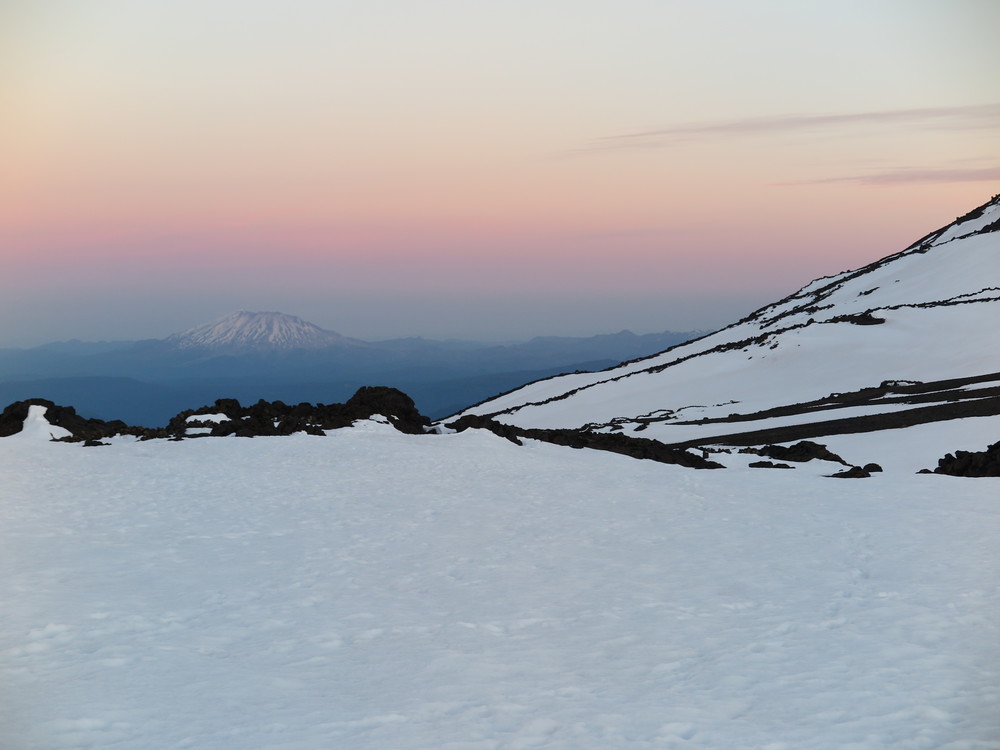 Mt. Saint Helens from the slopes of Mt. Adams at sunrise.