Posted at 23:26h in My Adventures by Anastasia Allison 5 Comments

When I visualized the high route in my mind before our trip, I had an image of how much I would enjoy waking up each morning – emerging from the coziness of the tent and feeling the first rays of the sun hitting my face.  Standing up and breathing in the crisp, mountain air.  Sipping my hot coffee and nibbling on my breakfast bar – excited to start a new day of adventures.  Day two of the High Route took that dream, like a spider that sneaks into a shower uninvited, and completely smothered it.

I woke up on day two with a brain-splitting headache.  The sun pierced my eyes like a barbed dagger as I stumbled, clumsily from the tent.  Having hiked at high altitudes before, I knew that this was likely due to the transition from sea-level to nearly 10,000ft in such a short period of time.  I had fortunately brought some aspirin with me, which serves as a low-level altitude sickness remedy.  I choked down my coffee, but I could barely get myself to eat my bar – I felt like I might as well have been stuffing an old sock in my mouth.  I broke off a few small pieces and forced myself to chew them.  This was NOT how I had envisioned day two, and I knew that we had a big day ahead – our first departure from the trail, and our first big climb to a pass.  I needed to recover – in a hurry.  Naturally, Aaron was feeling terrific – at least one of us was. 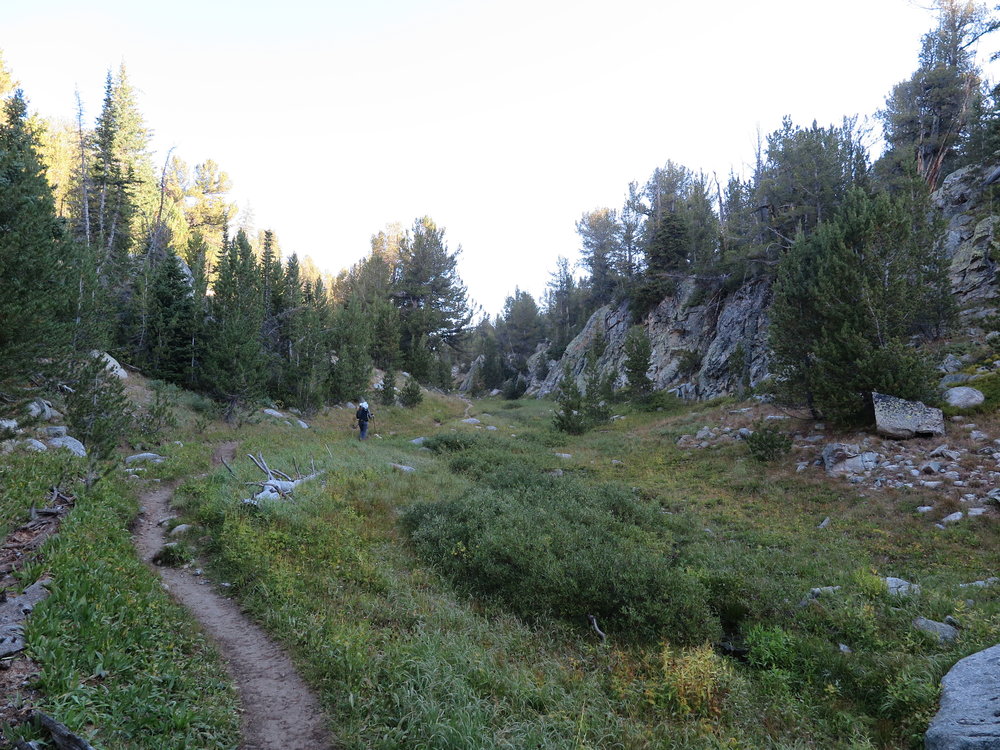 Leaving Marm’s Lake – Aaron thought this section looked like a scene out of Star Wars.

As we left Marm’s lake, I felt a small wave of relief – my headache seemed to be improving slightly, but my appetite was still extremely poor.  Nevertheless, we pushed onward – hiking the familiar trail for a few miles until we reached the northwest corner of Skull Lake.  It felt somewhat foreboding that the spot we needed to depart the “safety net” of the trail was from the edge of a lake named after a human skeleton.  Trying not to interpret the name as an omen, we checked our maps, and left the trail. 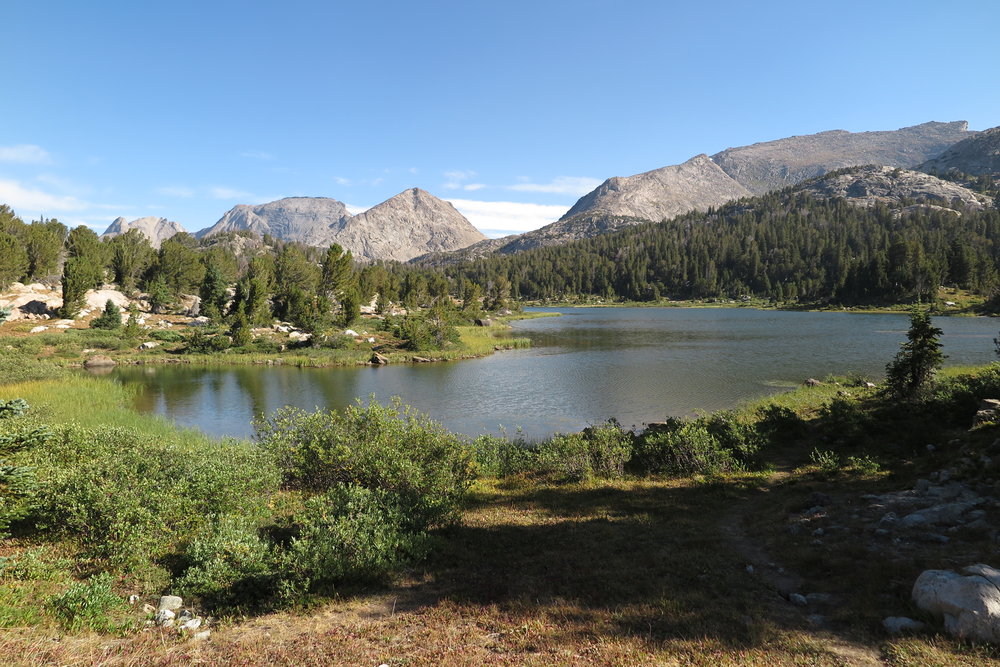 Skull Lake – the last time we would see an official trail for a long time.

Leaving the trail is a funny thing. We had maps, we had a compass and a GPS.  By all accounts, I would always know exactly where we were – there should have been no difference at all, except there was.  A trail not only makes navigation extremely easy (i.e. “WALK HERE”), but it represents something else – it says, “You aren’t alone.  Other people have been here.  Other people will be here.  You’re on the right path.”  Off trail, there are very few reassurances – an occasional footprint, a few rocks stacked on top of each other.  The confidence that you need to keep moving forward has to blossom from within yourself, rather than from a sense of familiarity with the environment.  When there is no trail to trust, you can only trust yourself. 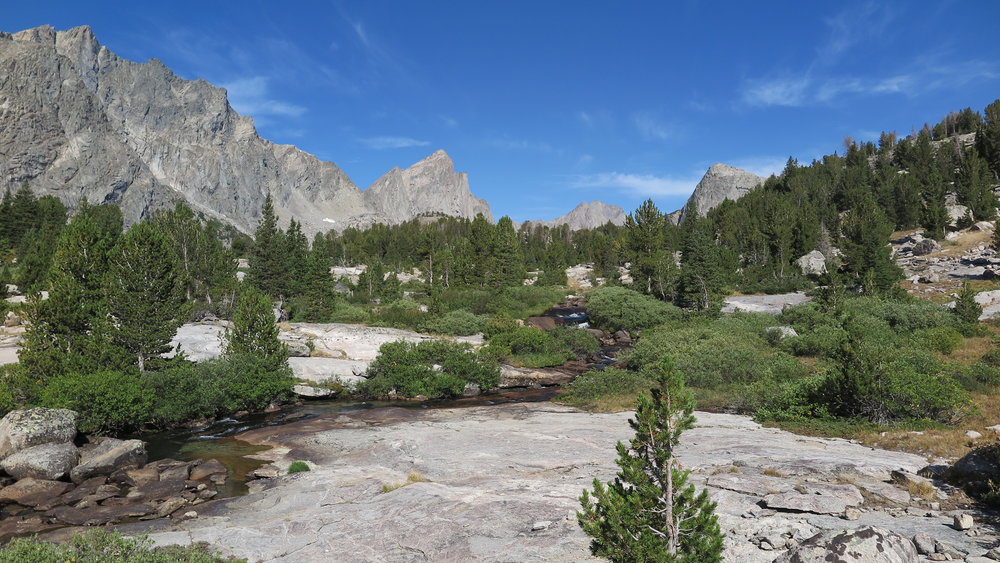 Pretty much, just hike through that.

As we hiked, the views started to open up.  We transitioned from forest to granite slabs to barren tundra to sapphire colored alpine lakes amidst monstrous towers of rock.  Already, I was overwhelmed at the scale and depth of the mountains and the jaw-dropping beauty of the Winds – and this was only day two.  I joked that every time I blinked I felt an urge to take a photo – it was literally that spectacular. 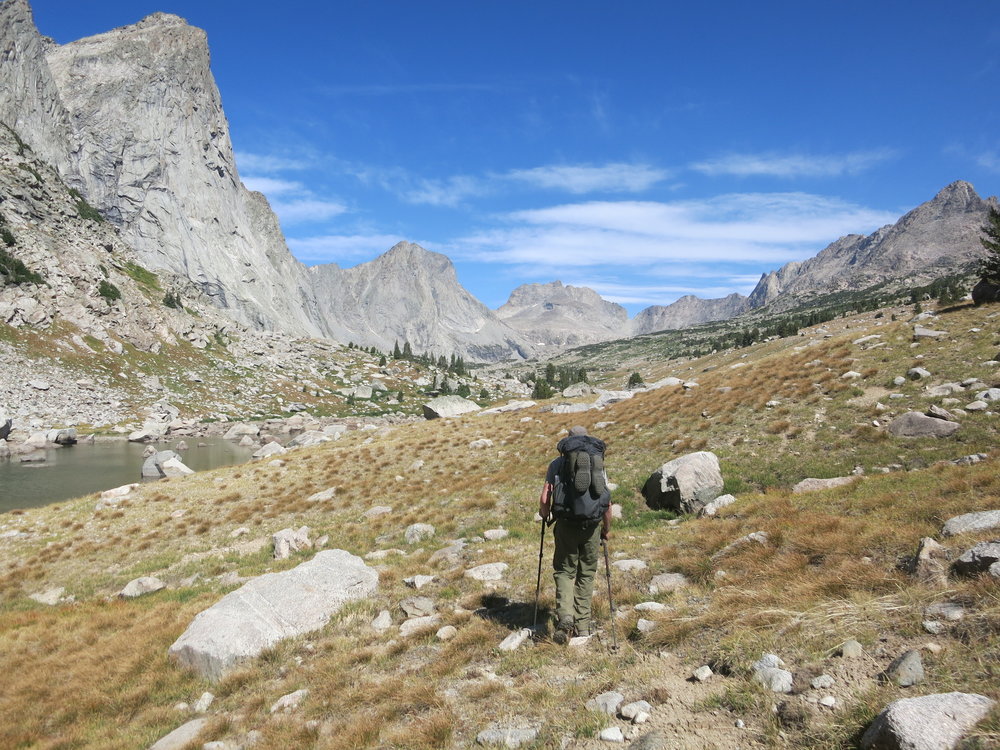 Trail?  Where we’re going, we don’t need a trail. 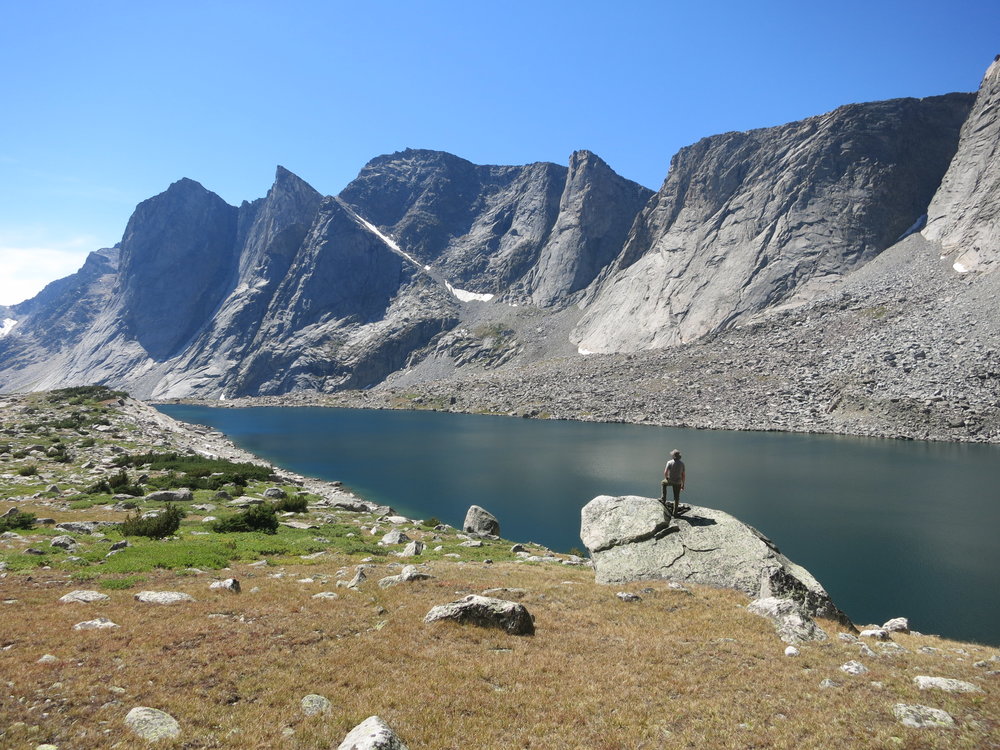 After leaving the shore of Lake 10556, we headed up a ramp to access a scramble that would ultimately lead us to Raid Peak Pass.  I looked up the slope ahead – boulders.  Lots of boulders.  We slowly picked our way through the rocks – carefully avoiding loose “ankle biters”, which could end the trip quickly and painfully.  At first, climbing on the rocks was fun and challenging – like doing an extremely slow version of parkour while weighted down with a heavy pack (and without the somersaults).  Rather quickly, however, it became tedious.  Rocks move and wobble.  Rocks are extremely heavy.  Hopping across a seemingly endless sea of rocks is not only physically tiring, but also mentally tiring – one lapse in judgement or temporary carelessness can easily lead to a catastrophic fall. 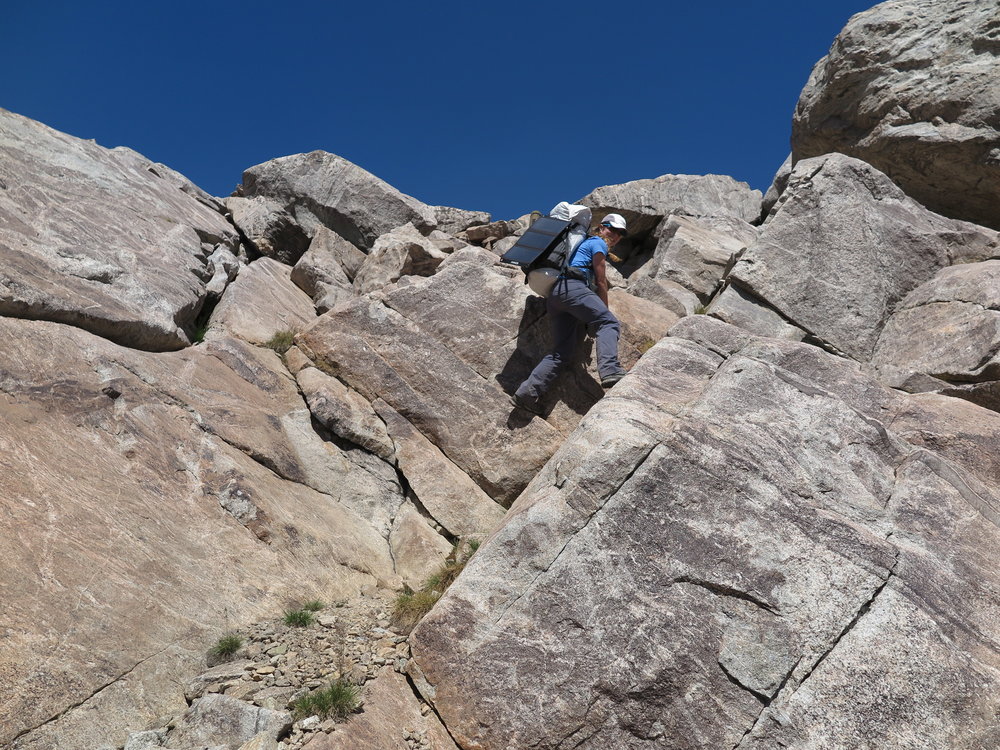 Yay, rocks!  (that’s a solar panel on my pack, for those who are curious) 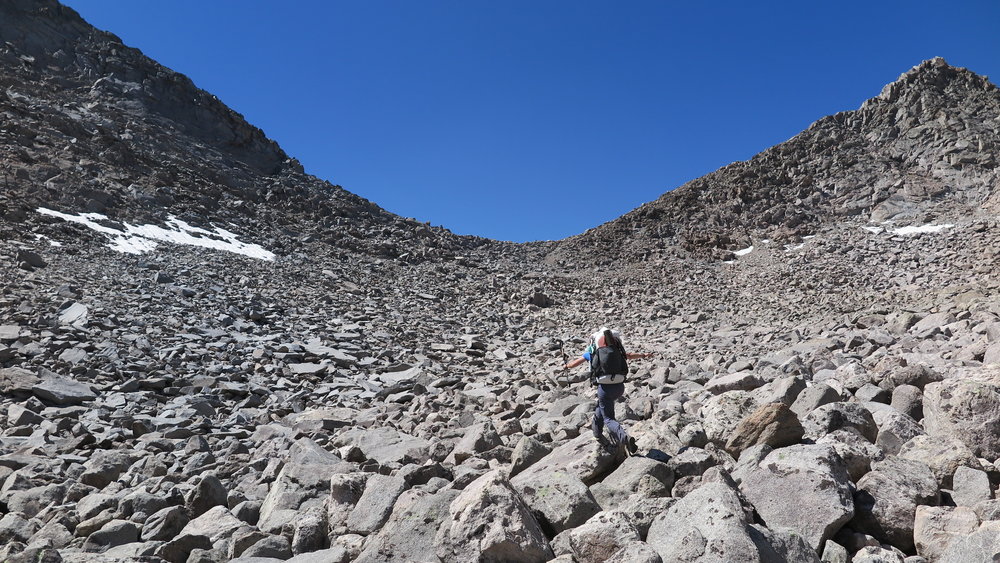 Picking our way (slowly) through an endless sea of boulders to Raid Peak Pass (low point in the distance).

After reaching Raid Peak Pass, another ocean of boulders greeted us on the other side (surprise!).  We knew that in order to get down to the Bonneville Lakes we could either take an easier, longer route or we could take a shorter, steeper route that involved class 3 scrambling.  Not one to miss out on a good scramble, we obviously opted for the steeper route.  We easily located some granite ramps, and we carefully picked our way down into Bonneville Basin.  I was admiring the lakes when suddenly out of the corner of my eye, I saw some movement – I turned back just in time to see a rock give way under Aaron’s feet and I watched in horror as he fell onto the rocks on his back.  He groaned in pain, and I immediately noticed that his leg appeared trapped under the rock that had rolled – as I frantically tried to heave it off his leg, he desperately tried to catch his breath and tell me that the pain was on his tailbone, not his leg.  Realizing this, I grabbed his hand and hoisted him to his feet.  Mercifully, his leg was not stuck or broken.  We did a quick triage of his symptoms and determined that he had most likely sustained a severe bruise.  While we felt lucky, we were both slightly shaken by the incident – it had happened so quickly, and completely without warning.  The wilderness again was again reminding us that our margin for error was extremely small. 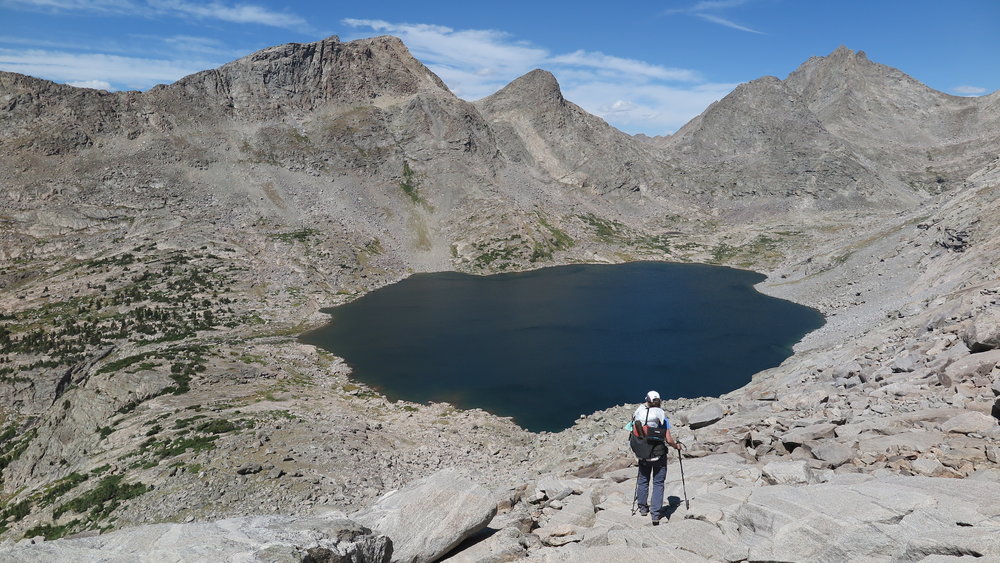 About to descend steep slabs to Bonneville Basin.  Sentry Peak Pass (our next big pass) is the obvious low point in the middle-right of the photo.

Upon arriving at Bonneville Basin, my headache had returned.  The wind was howling.  We struggled to find a flat campsite that wasn’t completely full of rocks.  I sat on the ground with my head in my hands, trying to wish the pain away.  As I sat there, feeling slightly sorry for myself, watching Aaron nurse his sore back, I lamented, “I wish I could capture this.  I’m going to go home and post some incredible photographs of our trip – but this is what makes it epic.  Pushing through this, not because anybody is forcing you, but because it’s just what you do.  Because we won’t make it back to the car if we don’t.”  And that’s exactly what we did – we pushed through.  There is very little time to rest upon arriving at camp – the tent won’t set itself up, water won’t filter itself and clothes won’t wash themselves.  As the icy wind whipped my face while I fumbled in the frigid outlet stream of Bonneville Lake to wash my socks, I had to smile – my friends tell me I’m nuts a lot of the time, and I almost was starting to believe them.  Almost. 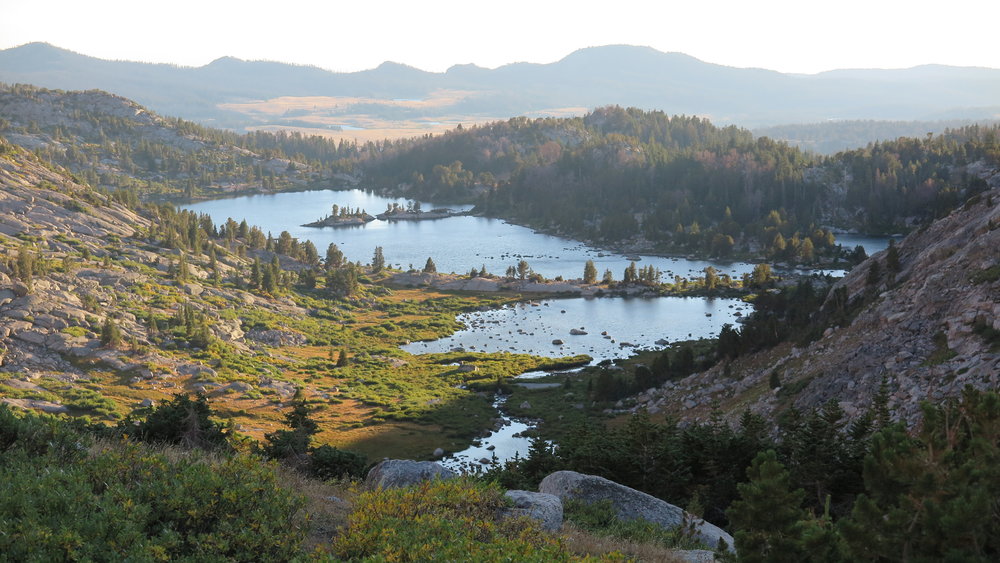 View from the outlet stream of Bonneville Lake into a lower basin – dreamlike!

When I was a little kid, and back when “No Fear” was an awesome brand (I’m dating myself now!), I had a shirt that said, “The pain is temporary, but the glory is forever.”  To this day, I cannot believe that I wore that shirt in public – I’m even slightly embarrassed to be admitting it here, but for some reason that silly t-shirt popped into my mind in Bonneville Basin.  Aaron’s bruise would heal and my headache would pass – I knew that, but some part of me wanted to make sure that I remembered those things – that they weren’t forgotten as a meaningless part of the trip, but rather as contributors to the experience.  I wouldn’t let negativity define the trip, but I also wouldn’t let it be forgotten, amidst my photos of fantastic mountain views.  Each challenge that presented itself was like an invisible trail – showing us not the route, but rather building our trust in ourselves and our strength together.  I would use those moments as a “trail blaze” of perseverance – a sign that despite reasonable difficulties, we could do this.  We were going to make it.  We would wake up tomorrow, whether it was a picture-perfect wake up or not, and we would move forward to the next camp, and the next and the next.  We didn’t need a trail to give us a false sense of security – the real security lies within.  Our indomitable spirits would create that trail before us and silently guide us- growing closer to each other and stronger together with each passing step. 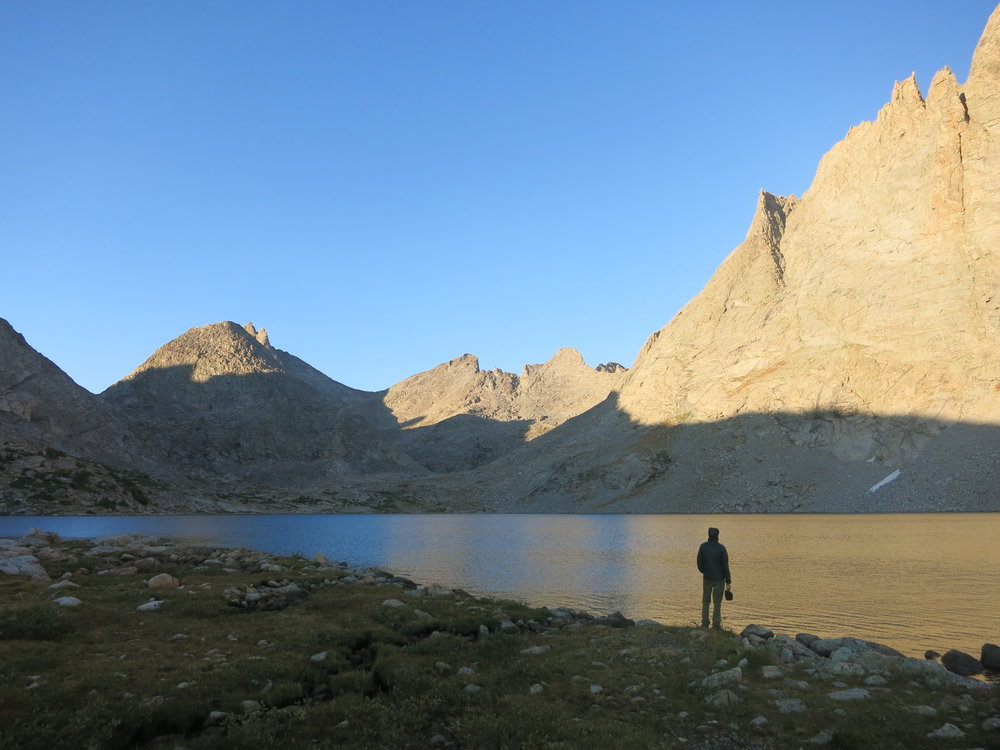