Posted at 23:33h in My Adventures by Anastasia Allison 4 Comments

I was worried about day four, even before it was actually day four.  Our shuttle driver on the first day had wistfully remarked, “Well, the weather looks good on Monday, Tuesday and Wednesday… but then it looks like something ‘funny’ might happen on Thursday and Friday … after that, you’ll be good.”  There are a lot of things that I consider ‘funny’ – politics, watching somebody trip and then try to pretend that they actually meant to start jogging or perhaps accidentally sprinkling chilli powder on my baked apples instead of cinnamon.  Being in a storm while climbing Europe Peak, an exposed mid-route summit, was not one of those things.  When we woke up on Thursday morning and peeked out of the tent, we couldn’t see much, except for fog.  Navigating up a mountain with zero visibility? This was going to be interesting.

Each morning at camp has a similar routine:

On this particular morning, Aaron had wandered off to complete step 10 of the process, and I was at camp finishing up the particulars of packing my bag.  The morning was eerily still, with slow waves of dense fog creeping around our small campsite.  Suddenly, I was startled by a loud thump that reverberated through the campsite.  I froze as a female elk and calf rounded the corner less than 100 feet from me.  Instantly, they saw me, and ran the opposite direction.  Our campsite was located in a thin band of trees – I watched anxiously as the elk stopped in a rocky meadow directly across from our campsite.  We stared at each other, completely mesmerized, for awhile.  I often wonder what that interaction is like for an elk.  For me, having the opportunity to cross paths with and look at such a majestic creature is an absolute gift.  For the elk, I imagine it’s a combination of terror and “WTF is THAT??”. 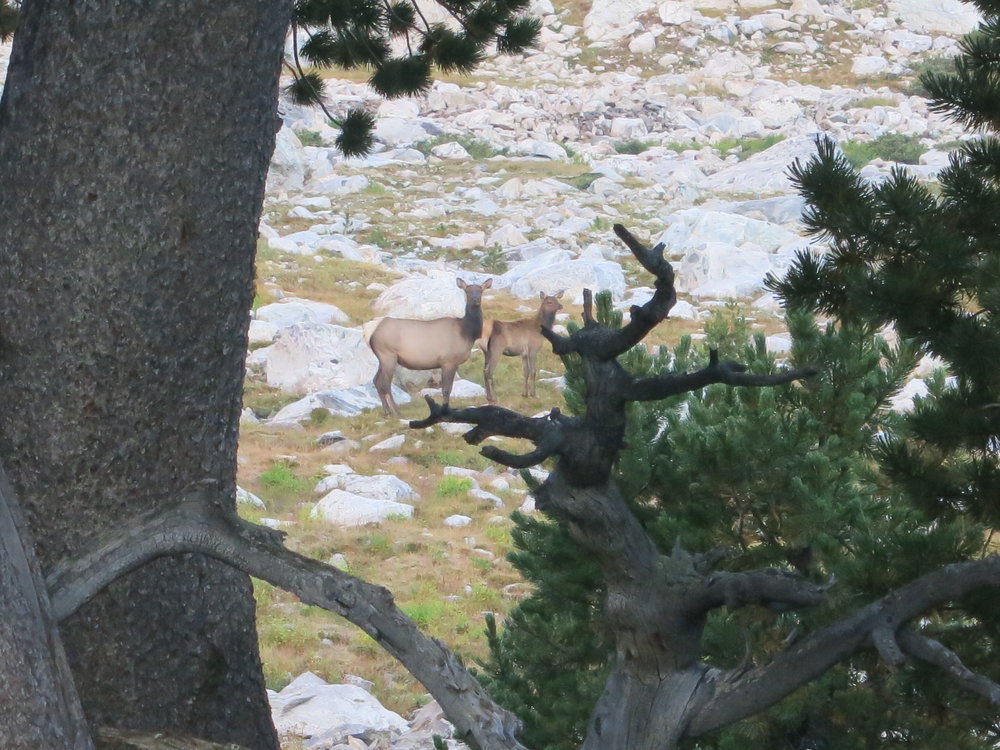 We left camp, and guided by our map, we set out to find our route.  Climbing a mountain with good visibility can be difficult.  Climbing a mountain with zero visibility is definitely difficult.  While the maps gave us a good idea of where we were supposed to be, the entire story isn’t there – the maze of individual ledges that we ascended was not visible on the map.  We knew where we wanted to go, now we just had to connect the dots to get there. 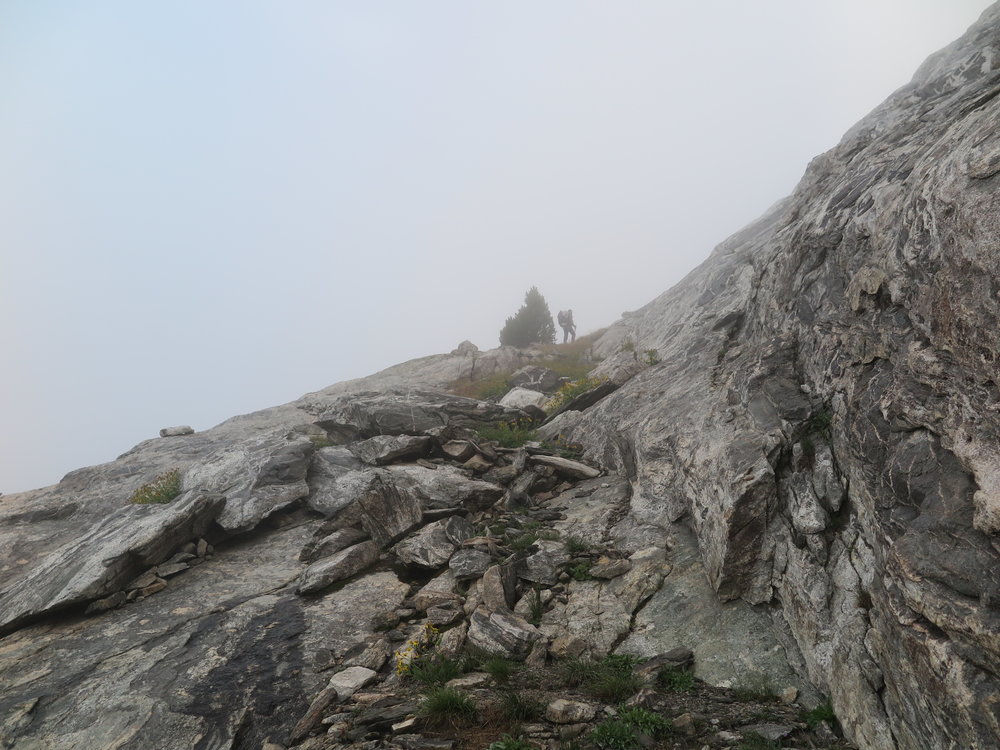 Slowly picking our way through the fog up the ledges towards Europe Peak.

Looking back on the the trip, the morning climbing Europe Peak is one of my favorites.  It was cold and damp and the earth around us was silent, except for the wind and the sounds of our footsteps and breathing.  I’ve often said that I love hiking in the dark, because you can’t tell how far you have to go.  Similarly, hiking in the fog has such an ethereal, magical quality – as if we went to bed last night on one planet, and woke up on another.  Distance, time – those things become irrelevant as they lose their hold on you and drift away. 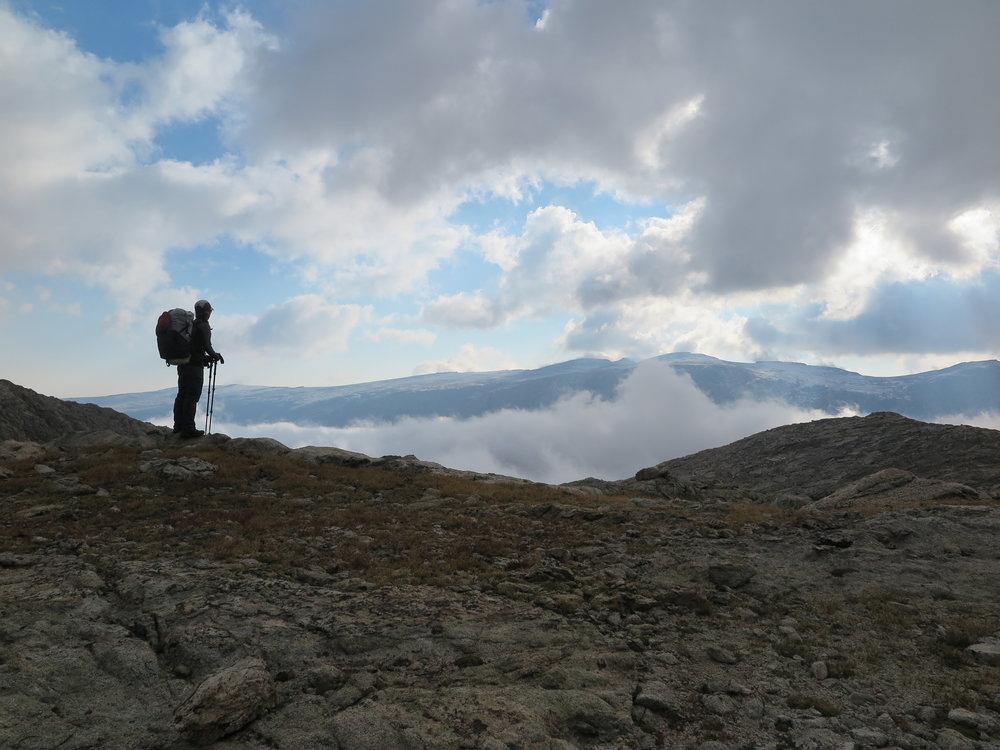 A small break in the clouds.

As we hiked, I told Aaron that the fog looked like a diaphanous veil.  Initially, he didn’t believe that “diaphanous” was a word.

Honestly, even now that I’m posting that definition, it is highly likely that he still won’t believe me. Needless to say, the discussion took up a good portion of our ascent. 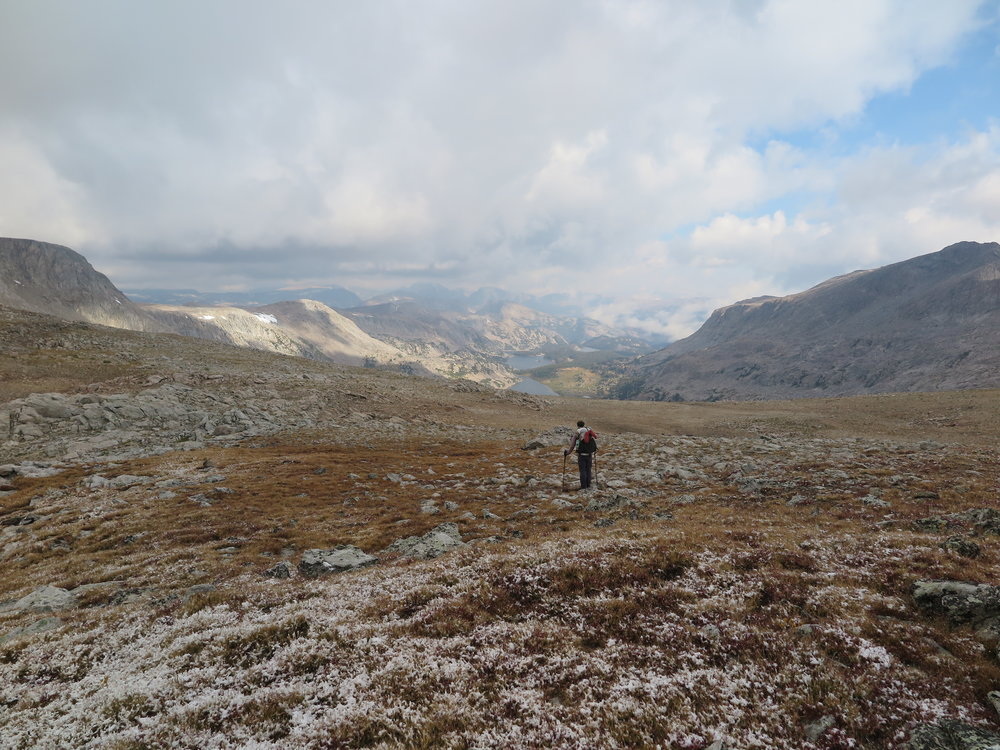 Along the ridge, aiming for Europe Peak (out of the photo to the left).

Ascending through the diaphanous veil of fog, we finally made our way out of a gully and up onto a massive ridge.  I looked at the map and saw which direction we needed to travel.  We looked into the distance and saw a massive mountain in front of us that appeared to consist of a precipitous, sheer cliff.  That can’t be the route.  We didn’t have ropes, and this route wasn’t supposed to be “technical”, but it looked nearly impossible.  The lump in my throat returned, just as the frigid wind kicked up and a thick non-diaphanous layer of fog enshrouded the peak. We were both completely bundled in our warmest layers.  Shivering and bracing ourselves against the stiff wind, we pushed onward. 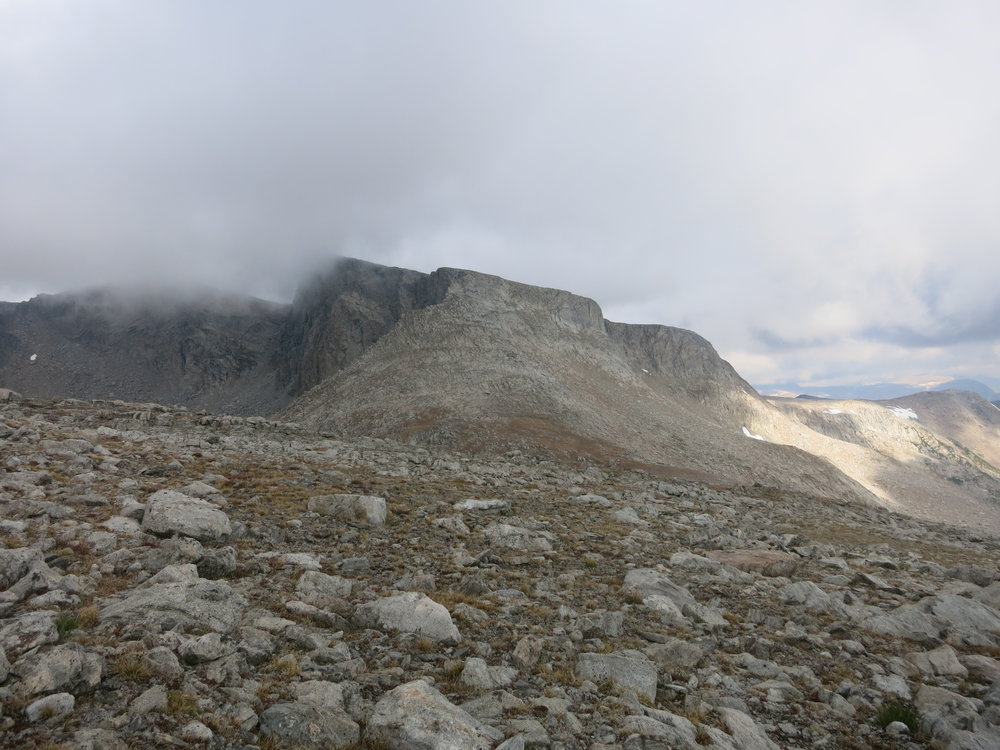 Each night on the trip, we reviewed the next day’s route while sitting in the tent before bed.  Now, with a seemingly vertical cliff staring down at us, my only consolation was what I had read the night before in the guide, “The walk to the base of Europe Peak looks great, but the climb up looks bad.  Don’t worry — it goes.”  I was trying, unsuccessfully, not to worry.   The route didn’t just look bad, it looked impossible.  I took a deep breath – I had to trust the knowledge and expertise of somebody who had already done this route.  As tempting as it was to bail out into an adjacent valley, the allure of a mid-route summit was too appealing.  We would just keep walking – after all, that’s all we really could do. 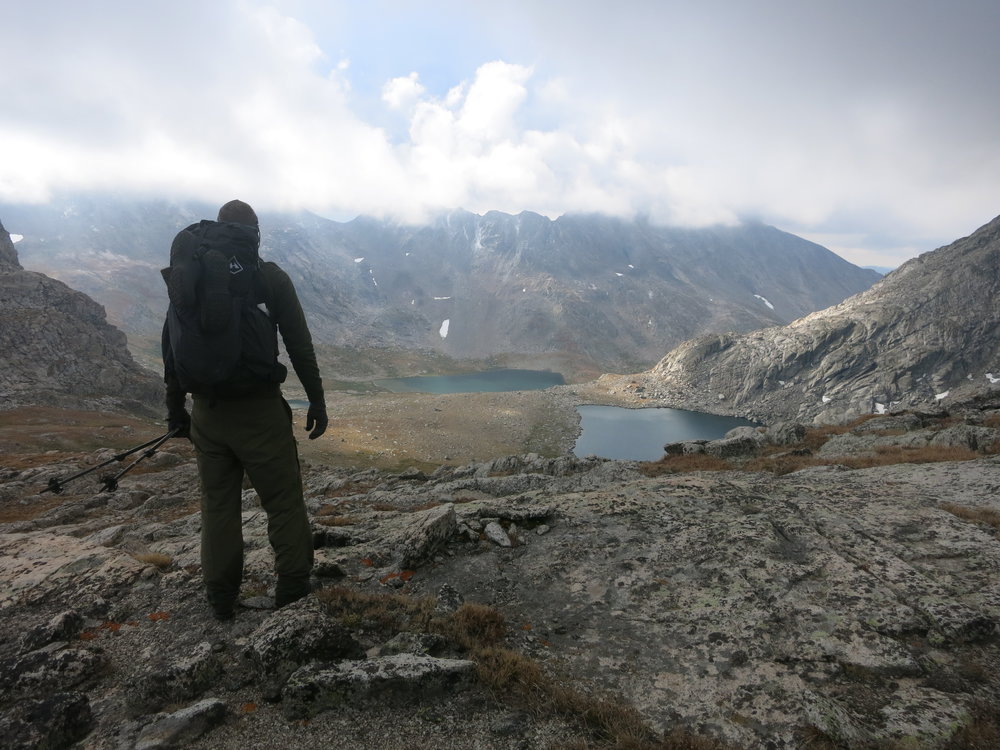 Looking down to a lake basin, below the base of Europe Peak.

After travelling for 4 days, we were now on page 3 of our annotated mapset.  The topography lines were tightly packed around Europe Peak, and there was a tiny arrow pointing to a specific spot that simply said, “15-ft Class 3 corner to knife edge, yeehaw!”.  As we started up Europe Peak, it was infinitely better than it had looked from a distance – instead of a vertical cliff, the seemingly impossible steepness of the slope faded as we approached into a manageable  series of ledges. We zigged and zagged up the ledges until finally we found ourselves at what seemed like a corner.  I dropped my pack for a few minutes to scout the route, and found that we had overshot the route onto the knife’s edge by about 20 feet.  We backtracked along a thin, precarious ledge (slightly sketchy), until we located a fun, stable (yeehaw, indeed!) scramble. 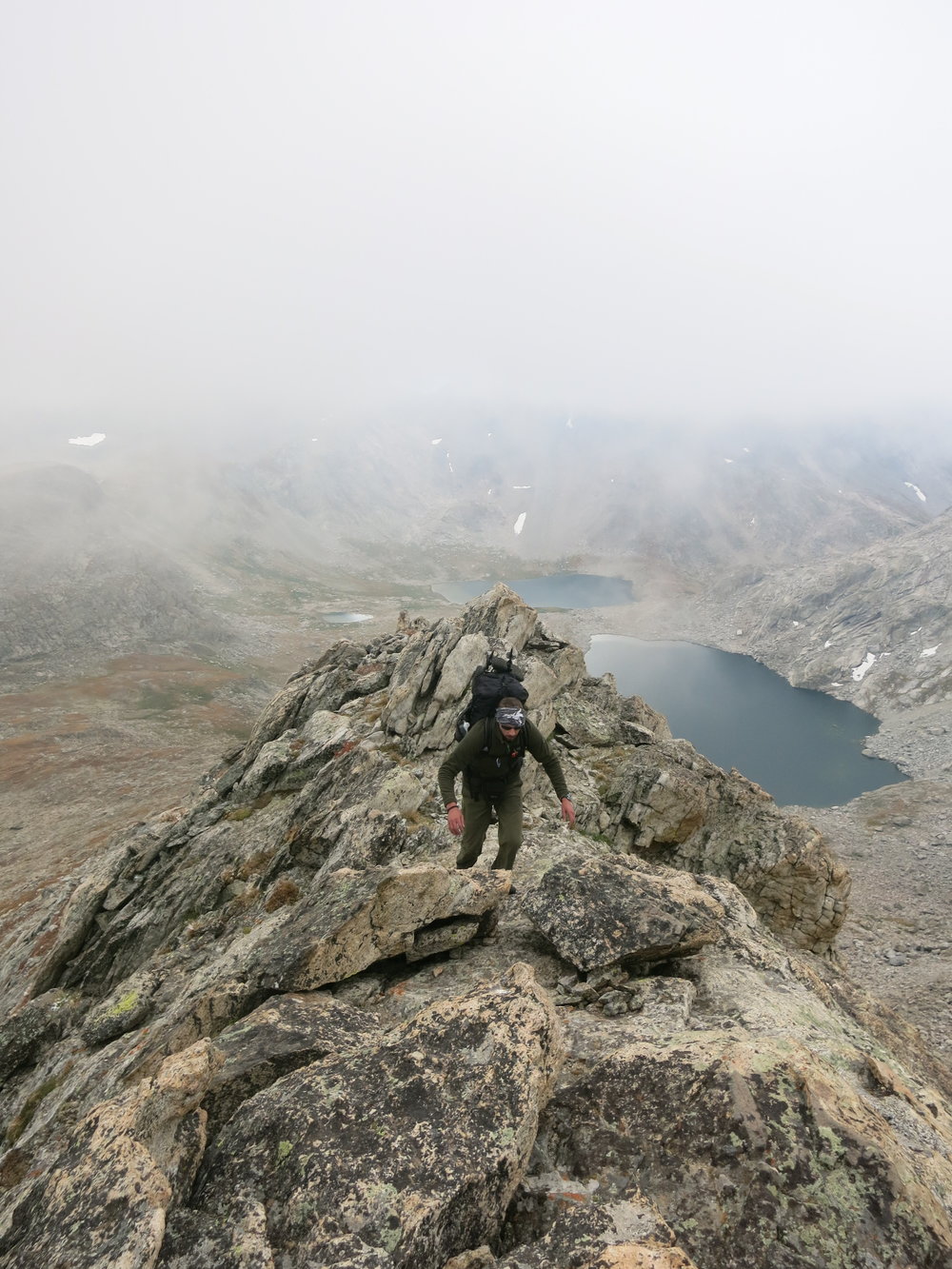 Aaron, scrambling up the knife’s edge ridge on Europe Peak.

I’ve been climbing for many years, and to this day, I always experience anxiety on a mountain.  I’m not talking about paralyzing anxiety and/or panic attacks – I’m talking about anxiety regarding every aspect of the climb.  I’m anxious about finding the route, I’m anxious about whether or not we will make it, I’m anxious about the weather.  In general, I’m not a very stressed-out person, and based on the fact that I spend the majority of my personal time in the wilderness, you would incorrectly assume that I feel 100% comfortable out there, but I don’t.  In fact, that’s part of the reason why I love it – I thrive on the uncomfortable moments and I find joy in “solving” each portion of the puzzle – putting the route together so that it’s possible and so it makes sense.   Even though Europe peak was a relatively simple climb, there were still a lot of unknowns, which were compounded by the less-than-ideal weather.  In addition, the fact that the peak was actually part of the high route, it didn’t seem as simple to me as, “Oh, we’ll just bail and walk back to the car if we can’t figure it out.”  Because, really, where were we going to go?  We actually had to ascend the peak in order to get back to the car.  There was really only one place to go, and that was up. 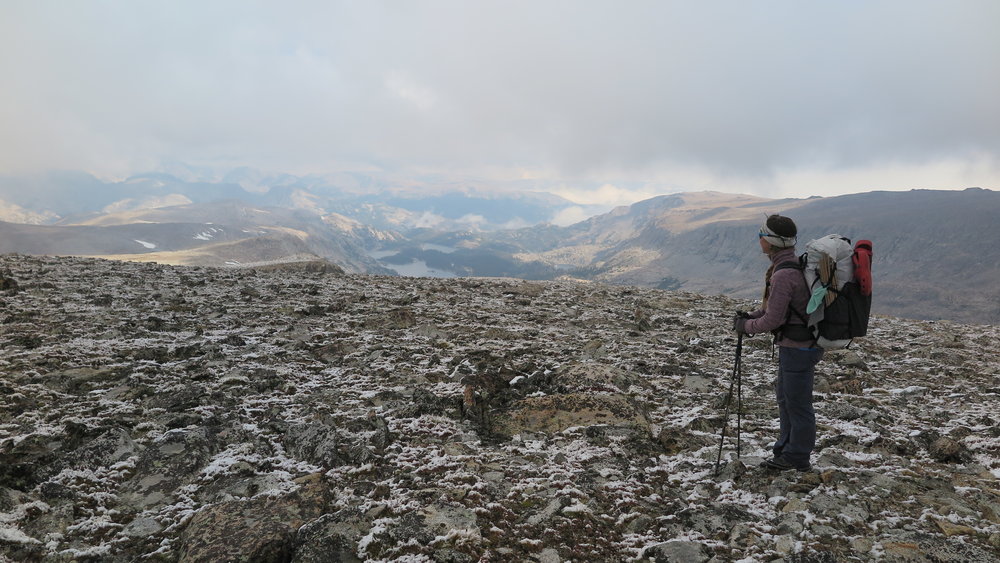 Light snow on the Continental Divide, below the true summit of Europe Peak.

There is moment on each climb when the realization that you are going to reach the summit hits you, and it is nearly always my favorite moment.   Most people tend to think that stepping onto the summit of a mountain is an emotional, exhilarating moment – and while that is sometimes true, for me, the most emotional moment is always upon my, “realization of success.”  Years ago, I summited Mt. Rainier after 2 previous unsuccessful attempts.  After not climbing Mt. Rainier twice, I had conditioned myself to be prepared for yet another disappointment.  And yet, on my  third attempt, I found myself standing on the crater rim one sunny day in June of 2009.  I remember that moment so vividly – a wave of emotions washed over me so powerfully that I could feel them tingling in my bloodstream.  It was the same for me on Europe Peak – the anxiety, fear and uncertainness were swept away into the fog on a gust of wind – replaced by elation, joy and a lot of relief. 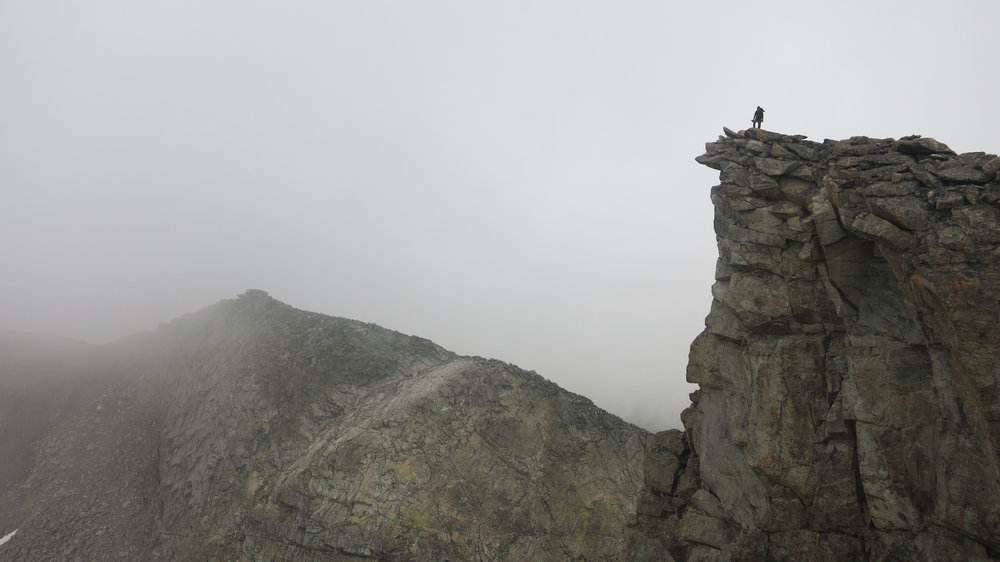 One of my favorite images from the trip – Aaron, on the summit of Europe Peak.

After reaching the summit, our day was not finished.  We still had to hike down the Continental Divide (which was extremely tedious, due to – surprise! –  rocks) to reach Golden Lakes.  The Golden Lakes was our pre-determined campsite for the evening, and according to the guide, it was the last truly protected campsite on the entire route.  Considering that we were only on page 3 (out of 9), I had to wonder what adventures would unfold as we translated the topo lines on our maps to the reality beneath our feet. 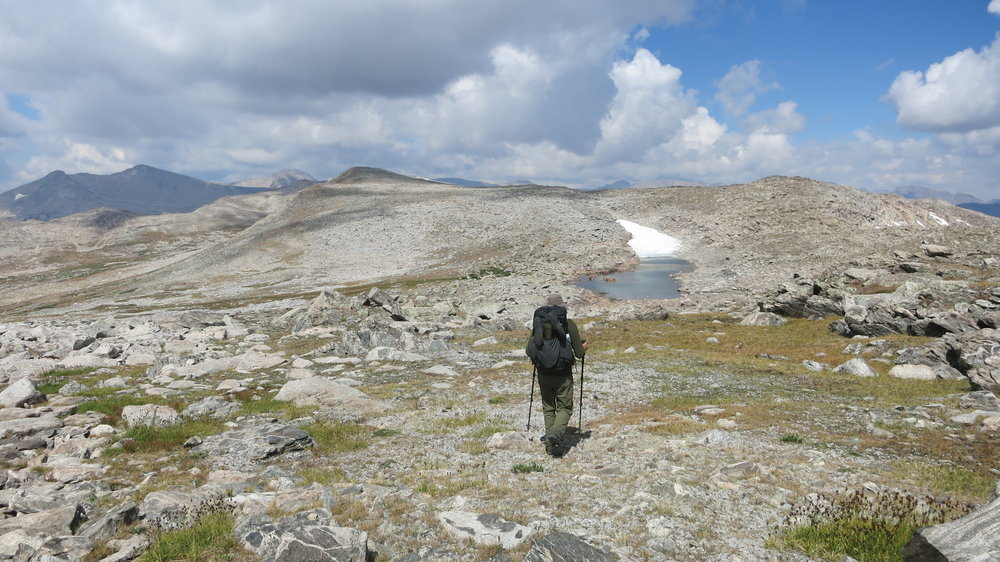 Walking the Divide towards Golden Lakes (not seen in photo).

Our time at Golden Lakes was indeed special.  We successfully caught (and released!) a few golden trout, we napped in the tent while we endured one extremely violent rain/wind storm and we ate our dinner perched on a rock overlooking the lake.  My altitude headache was gone.  The journey was going better than I could have expected, but looking at the maps that night before bed, I didn’t allow myself to relax – there would be no “realization of success” for many miles.  In fact, the most difficult section of the route was yet to come.  But for now, I needed to focus on the plan for just the next day: one more day of “funny” weather to contend with, one major pass, and miles of rock-hopping through the extremely exposed Alpine Lakes Basin.  Relaxing isn’t a word that I typically use to describe my vacations – and to be fair, most people would not consider an 80 mile mostly off-trail hike to be anything other than completely miserable. That uncomfortableness – I expect it now, and I look forward to meeting it when it greets me.  As anxious as I might feel about certain aspects of the route, there is a certain calmness that comes after surmounting any difficult challenge.  I slipped into my sleeping bag that night at Golden Lakes, melting into the sleeping pad as every inch of my body relaxed so deeply that I wasn’t sure I would be able to wake up the next day and do it all over again.  The wind whistled through the tent, the darkness settled heavily onto the world around me, the water lapped gently at the lakeshore – we drifted to sleep, cradled softly by the very same wilderness we feared.

Looking at the Golden Lakes, with Douglas Peak Pass barely visible in the distance. 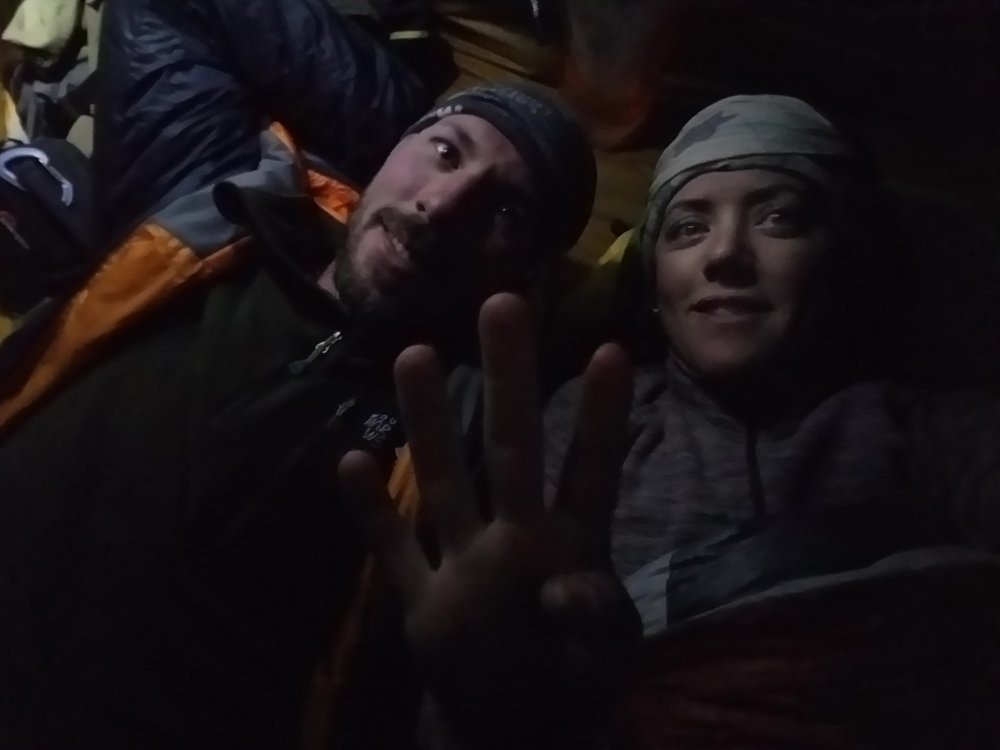