Posted at 20:07h in My Adventures by Anastasia Allison 2 Comments

The morning of day 6 dawned clear and frigid.  We were sleeping in every single layer of clothing, so waking up posed a slight challenge – namely, it was way too cold.  Over the years, I’ve come to realize that one of the hardest parts of climbing a mountain is getting out of the sleeping bag.  Who was it that decided that sleeping bags should be so unbelievably cozy and comfortable?  Given the choice between a toasty, warm cocoon and the icy knife of a cold blast of air – which would you choose?  The thing is, those first few steps on a chilly morning, as your body is starting to wake up, are absolutely brilliant.  You suck in air like water, and the coolness in your lungs is so invigorating that it is intoxicating.  Your muscles start to burn, your heart pounds in your head.  You’re alive. 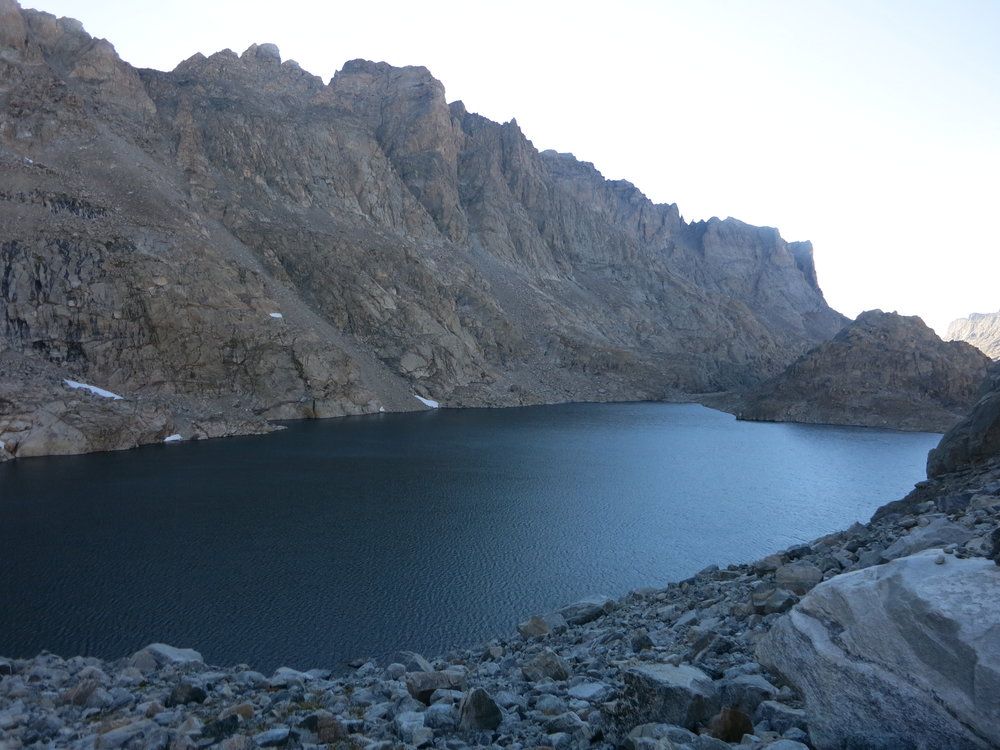 On this particular morning, we had a choice: go under some shoreline bluffs with a class 3 scramble at the end, or go up and over the bluffs with a little bit less of a scramble.  Aaron’s hands were so cold that he couldn’t use them properly, so we opted for the “up and over” route.  This ended up being ridiculously fun, as we found a terrific “notch” to climb through.  Of course, 100% of this route was comprised of boulder scrambling, and then traversing onto a messy terminal moraine (the rocky deposits of a glacier), also comprised entirely of (you guessed it) large, loose rocks. 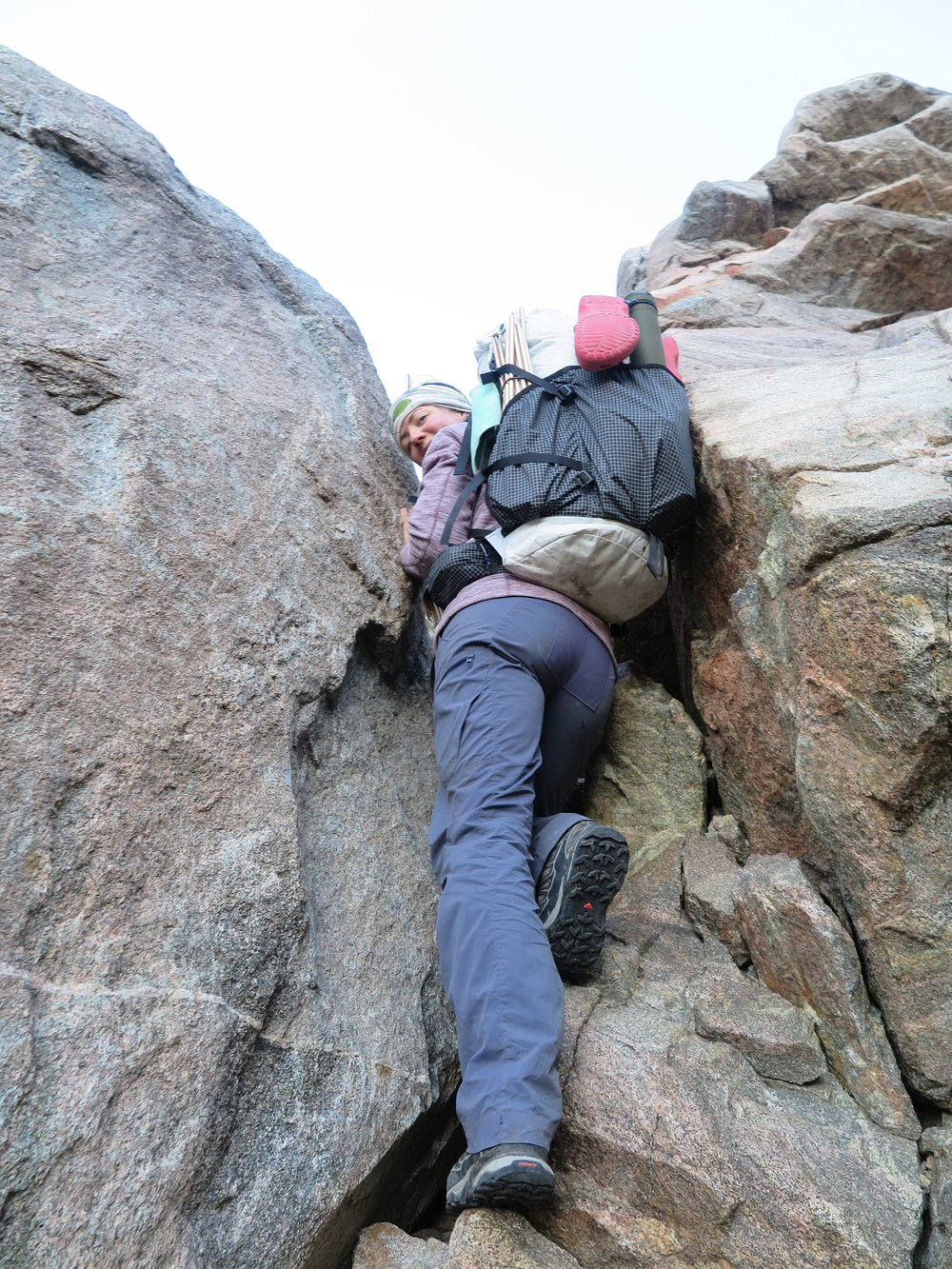 Climbing up and over the notch. 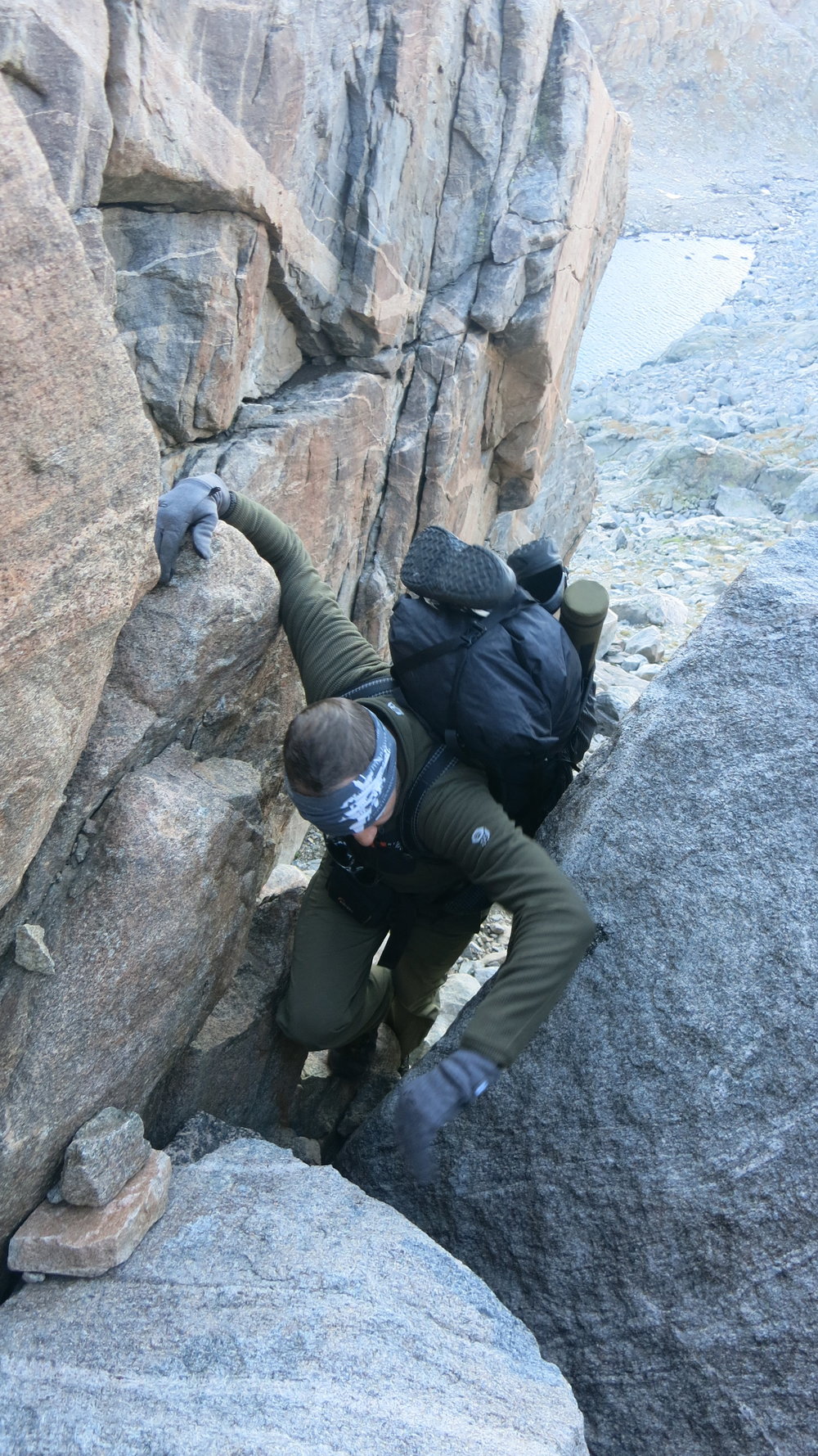 Aaron in the notch with the lake visible in the background.

Today’s “destination” was undecided.  We had to get up and over Alpine Lakes Pass, then down into the North Fork of Bull Lake Creek valley.  According to our route description, this was one of the most spectacular environs on the trip.  From there, we would have access to Blaurock Pass, the steepest climb on the entire route.  As we headed up Alpine Lakes Pass, my legs felt sluggish and heavy.  My lungs burned so badly that I felt like I was breathing out of a straw.  Naturally, Aaron was seemingly levitating up to the pass with almost no effort.  Me?  I was ready to request a personal Sherpa and an oxygen tank. 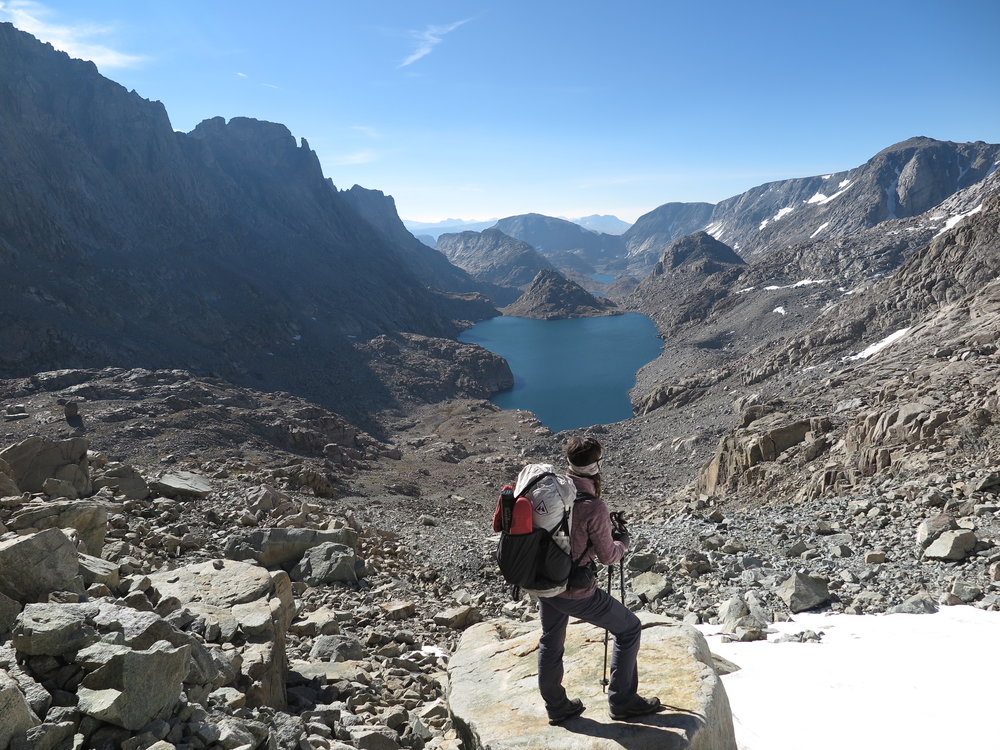 En route Alpine Lakes Pass – looking back down at Lake 11335. 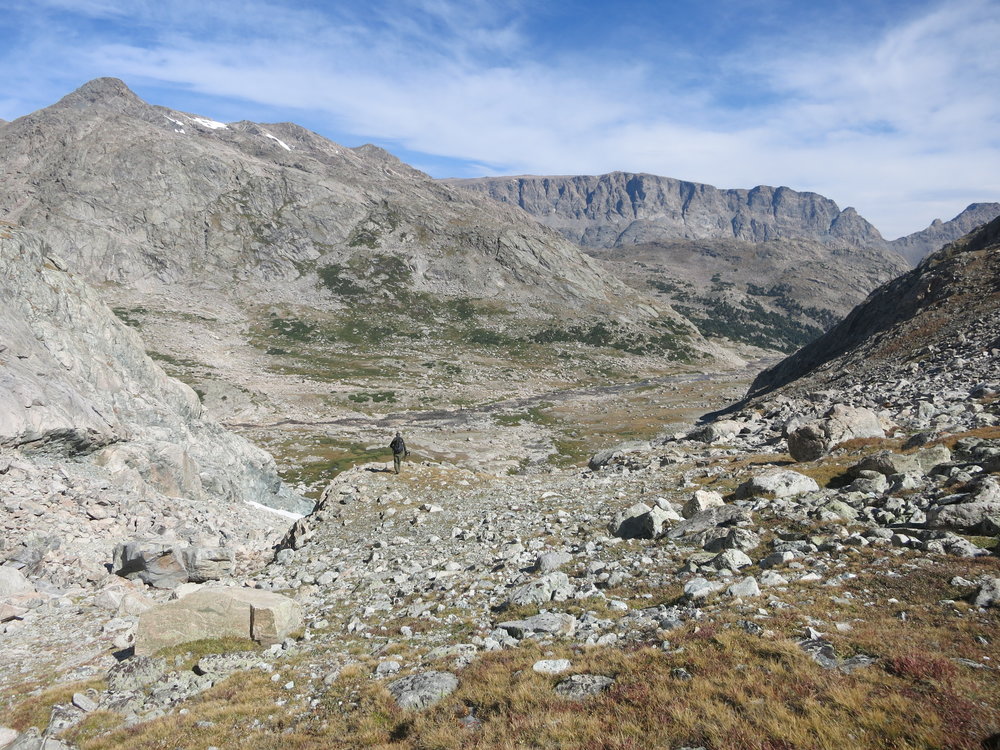 Coming down from Alpine Lakes Pass into heaven on earth.

I trained a lot for this trip.  In addition to my normal high intensity interval circuits and weight training, we added in extensive endurance-hiking trips so that we could be prepared for long days at high altitude.  We climbed Mt. Adams in a day.  We did a 24 mile 1-day backpacking trip.  We hiked 20-40 miles per weekend.  Needless to say, by the time we set foot on the trail, we were in peak condition.  Still, not much prepares a Seattle-ite for hiking long days, off-trail at over 11k elevation.  To this point in the trip, I had been feeling relatively “peppy”.  As we came down from Alpine Lakes Pass, I realized that was about to change.

There are three times in my entire hiking life that I can remember feeling so brutally exhausted that I just wanted to lay down and whimper:

1. Coming down from climbing Glacier Peak.  My feet hurt so badly that I was in tears.  Our group leader picked an “alternate” route that ended up involving a traverse across a ridiculously steep slope covered in wet grass.  By the time we made it back to the car, I was absolutely positive that my feet were no longer there, and that when I removed my boots, only bloody stumps would be left in their place.

2.  My 2nd (failed) attempt on Mt. Rainier – we were battered by 80mph winds and were forced to turn back.  By the time we made it down the Emmons Glacier, I had been knocked over by the wind in upwards of 200 times.  I sat on the snow, crying, and truly felt that if I were knocked over one more time, I wouldn’t be able to get up.  Naturally, the wind knocked me over immediately.  I cried more. 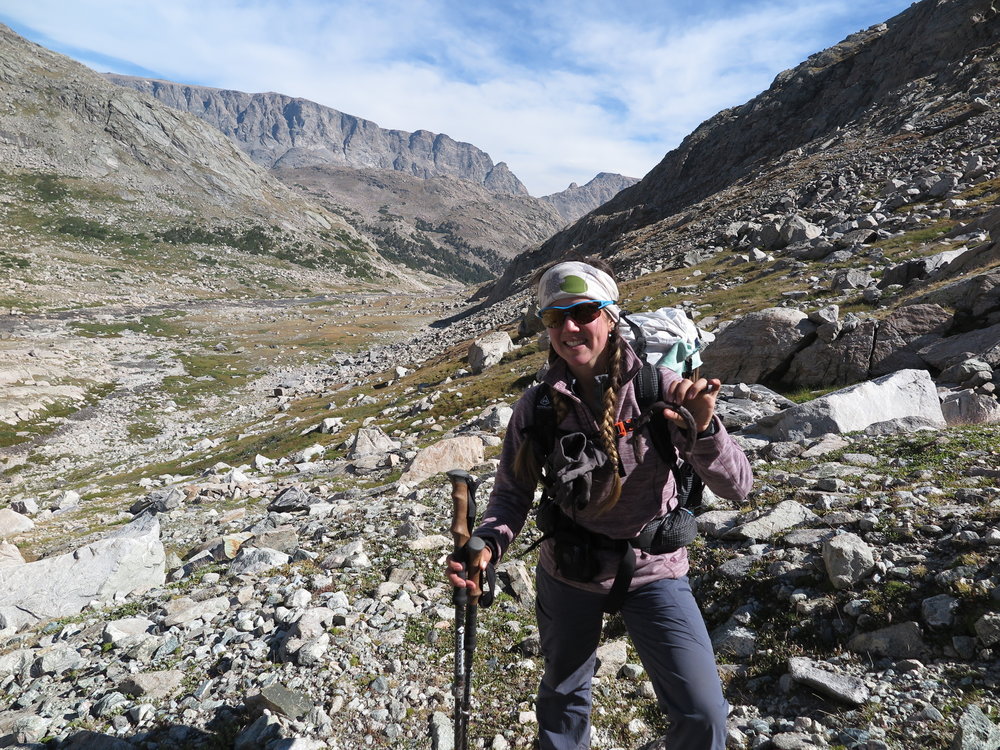 This landscape on this day was so beautiful that it hurt.  It hurt physically, because I was so exhausted that I felt like I was dragging my legs through a tub of wet cement.  It hurt my heart, because it was so absolutely stunningly gorgeous that it made me want to cry – have you ever been so overwhelmed by beauty that you can actually feel it?  The incredible part of this day is that just when I felt like curling up in a ball and taking a nap, the wilderness spoke.  Not with words, of course, but by revealing its secrets to us in ways that made me (temporarily) forget how tired I was.  Two humans, wandering together through the massive expanse of the world, suddenly watching an entire herd of elk sprinting wildly down a precariously steep slope – my fatigue was instantly washed away and replaced by excitement and wonder.  At the top of yet another steep ascent, where collapsing into a temper tantrum seemed like a reasonably viable option, a herd of Bighorn Sheep silently watched us meander through the rocky terrain. 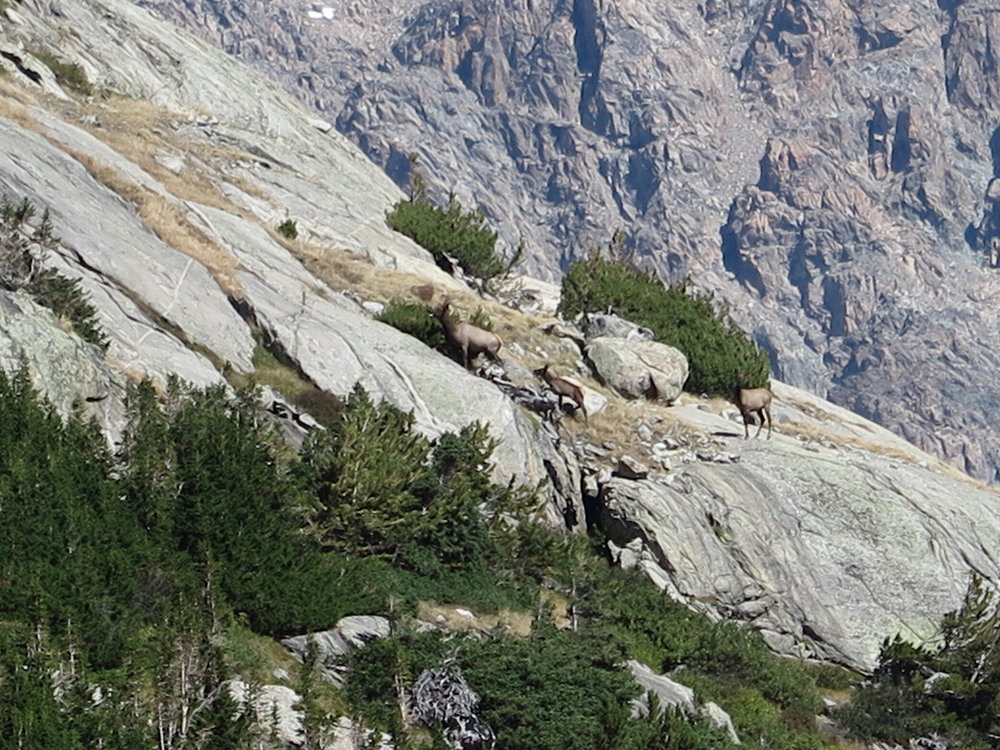 As we slowly dragged along through the valley of the North Fork of Bull Lake Creek, the views opened up even more – Sunbeam Peak and Mount Febbas accentuating the intimidation factor of our next major challenge – Blaurock Pass.  Our annotated map indicated that the meadow area below Blaurock Pass was a, “Sound of Music Setting.”  Considering the current level of my fatigue, dropping our packs for the day and singing, “The Hills Are Alive” as I pranced through a sun-kissed meadow sounded extremely appealing – except for the prancing part.  I didn’t have enough energy for that.  We considered trying to make it up and over Blaurock Pass, but given that the temperature was very warm and that we were both at the point where we were walking more slowly than your average zombie, we decided to set up camp and use the day to recuperate.  Based on how horrifically tired I felt, I guessed that we had covered at least 10 miles.  I checked the maps and the mileage for the day, and I gasped.  We had covered 6.1 miles.  Six-point-one miles?  On any given day, I could hike 6 miles without even thinking about it, and yet, on a day when I felt the most demoralized, we had walked the shortest mileage of any day so far.  The Wind River High Route was reminding me, yet again, that this was decidedly not your average hiking trip. 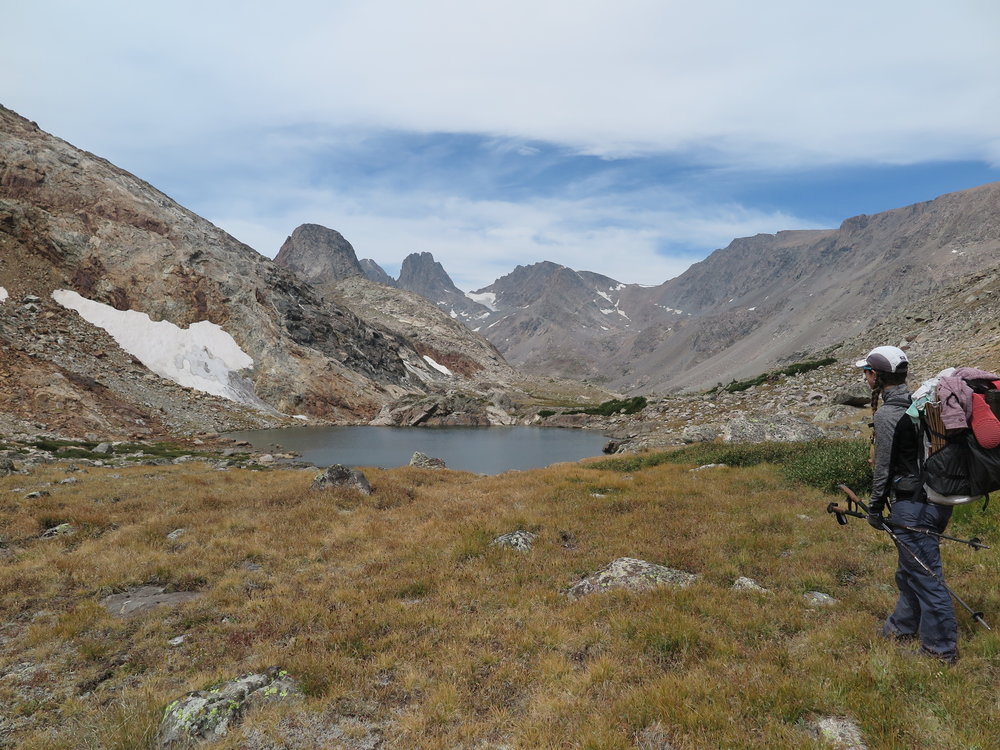 Blaurock pass is the saddle in the right/middle of photo.

One of the coolest things about writing a blog is that you get to meet really awesome people. A few months ago, I had the opportunity to meet my friend Diana – she simply e-mailed me through this blog and gave me some nice compliments about my stories.  We live local to each other, and we’ve been friends ever since.  She e-mailed me yesterday about hiking and beautifully wrote, “Being out in the mountains really makes you aware that you are not ‘large and in charge.” And that’s okay… I’m not top dog out there, nature is.  It’s a relief for me to know that I’m a part of the universe, not the center of it.”  I couldn’t help but grin when I read her words, because they resonated so perfectly with the experience that I was trying to capture.  Doing something like the Wind River High Route has a definite element of, “I’m strong and tough and brave” – but I had so many moments of exactly the opposite on this trip.  Exhaustion.  Fear.  Hesitation.  When you write about an experience like this, it’s tempting to frame yourself as the world’s most impressive bada$$:   that one person who can climb a mountain in a blizzard, fall 1000ft, live to tell about it, dislocate and relocate their own shoulder 17 times, lose their pack, eat grubs and drink their own urine and make it back to the trailhead saying that the trip was, “rad”.  So many times I find myself wanting to present an image of “toughness” or “extreme resiliency”, but really, I’m just human, like everybody else.  It’s easy to sound awesome by posting a photo of an ascent up a seemingly vertical cliff and writing, “The route was steep.”  It’s vulnerable to write things like, “The climb nearly scared my pants off.”  I don’t want to write about this experience and present it in an unrealistic way that makes it sound like Aaron and I are basically hiking cyborgs.  We experienced very real emotional ups and downs on this trip – and on this particular day, extreme demoralization was one of them. 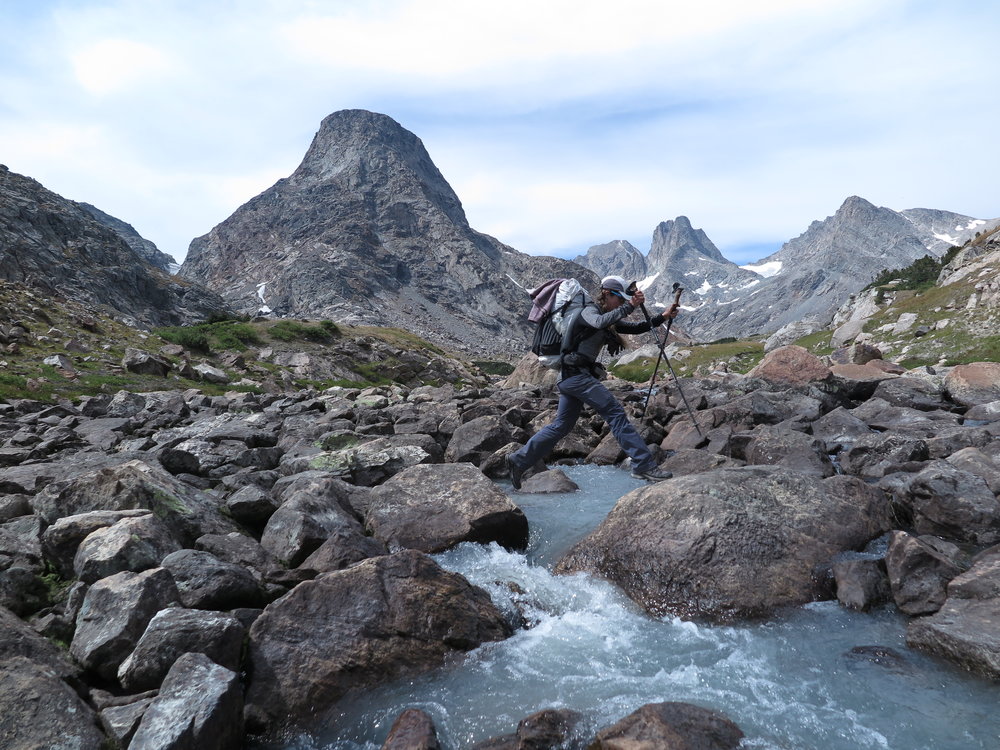 Crossing the North Fork of Bull Lake Creek (this was a dry year – typically, this is a wet ford). 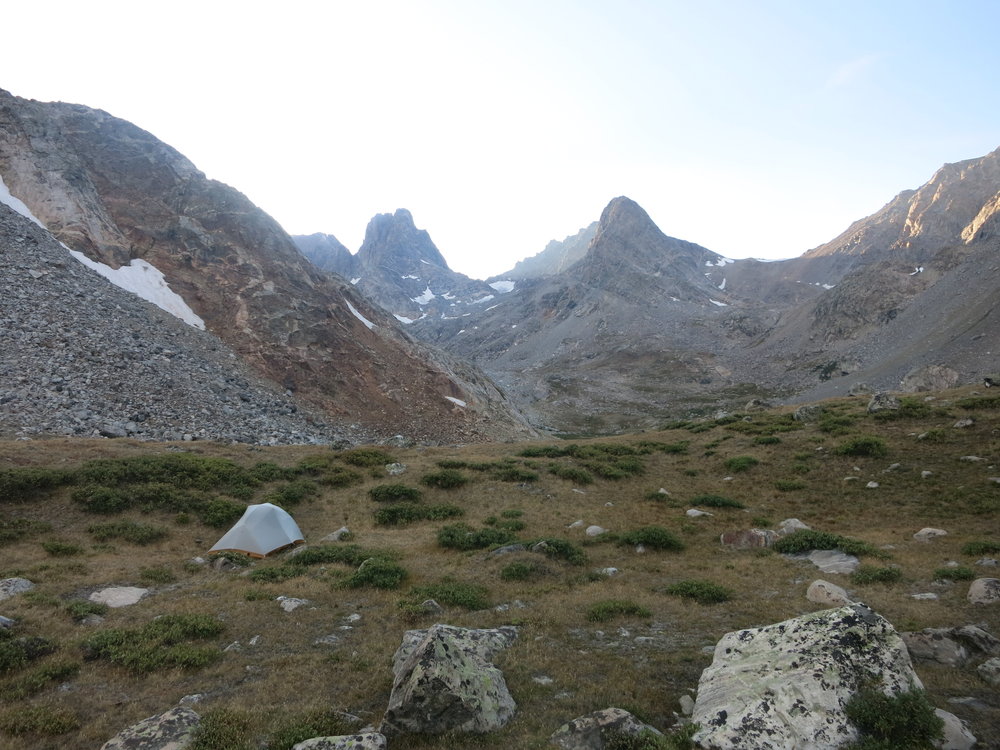 We set up camp at 2:30 PM, and spent the entire day lying in the grass, resting and reading.  Ultimately (as we learned the next day), this was the best decision that we could have made, as ascending Blaurock pass in our feeble physical state would have been stupidly hazardous.  Descending the other side of Blaurock pass would have been even worse.  And so, for one gloriously sunny afternoon on the high route, we listened to our bodies.  We succumbed to the fatigue and slept in the grass.  When we weren’t sleeping, we wandered around and soaked up the view.  We washed our clothes in the milky blue glacial water.  We definitely weren’t the center of the universe – we were a part of it- and it had worn us down.  After 6 solid days of walking, our bodies were not-so-subtly begging for a break.  In my iPhone journal that night I wrote, “The miles are hard, not one of them comes easily.  Only three more nights left.”  Three more nights, and over 30 miles – including the most exposed, most committing section of the entire route.  Tomorrow, we would wake up and will our bodies up the steepest ascent of the journey.  Tomorrow we would pick our way through a precariously loose rocky maze and across melting glaciers.  Tomorrow we would push ourselves to go further.  But, today … just for today, we could rest. 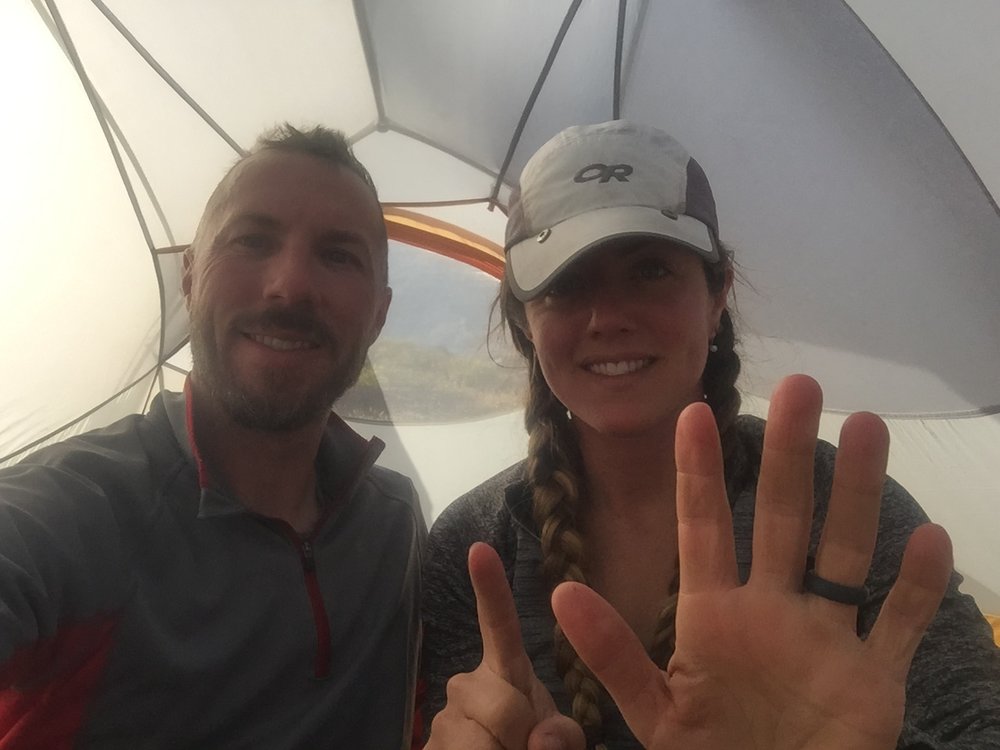