Fourteen Days in the Land of the Thunder Dragon

25 Mar Fourteen Days in the Land of the Thunder Dragon

Posted at 21:30h in My Adventures by Anastasia Allison 1 Comment

Author’s note:  I had the incredible opportunity to travel to the country of Bhutan in 2012.  On that trip, I completed the Laya/Gasa trek – a 138 mile trek through some of the most pristine and remote areas of the Himalayas.  This story was originally written for my previous blog, but the adventure bears a re-sharing.

Speechless.  It’s not a word that my fellow Bhutan trekkers would have used to describe me on our 14 day trek through the Himalayas.  In fact, after only mildly tolerating my park ranger stories and innuendos to my secret handgun hiding spots, I’m sure that most of them are probably wondering if it is physically possible for me to keep my mouth shut for longer than 20 seconds.  And yet, as I try to find the words to describe my (our) experience in Bhutan, I find myself … speechless.  The stark white of the computer screen glares back at me and my eyes close in frustration.  I’m taken back to our first few moments on the trek – walking through rice fields, straining our necks to catch just a tiny glimpse of a huge mountain, waiting anxiously for the first sight of our pack ponies and inhaling the deep aroma of curried potatoes and tea on the side of the trail.  Those first few miles, our minds were blank slates – but each new day and each new moment of the trek would soon begin to etch new memories onto the templates of our co-mingled lives. 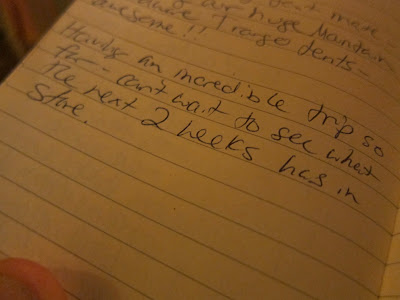 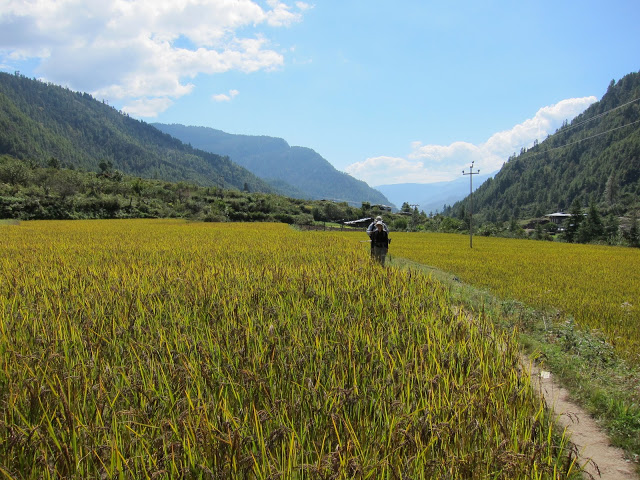 Rice fields on day one of our trek.

Prior to my trip when I told my friends that I was going to Bhutan, the two most common questions were, “Where the heck is Bhutan?”, and , “How much is that going to cost?”.  Bhutan is a tiny country located in Southeast Asia – below China and above India.  As far as price is concerned – how can I possibly put a price tag on a trip whose value was found in falling asleep to the sound of yak bells (and barking dogs), listening to the laughter of school children in a village 80 miles from nowhere, and waking up each day with the sole purpose of walking through the Himalayas?  I anticipated my trip to Bhutan for nearly a year – researching everything that I could find about the small, magical kingdom.  And yet, even with all of my research, when I arrived in Bhutan on a bright sunny day in October, I found myself completely unprepared for the way that the important things in the country would affect me for the next several weeks :  the people, the mountains, the simplistic way of life, and the sheer volume of the happiness that I would experience. 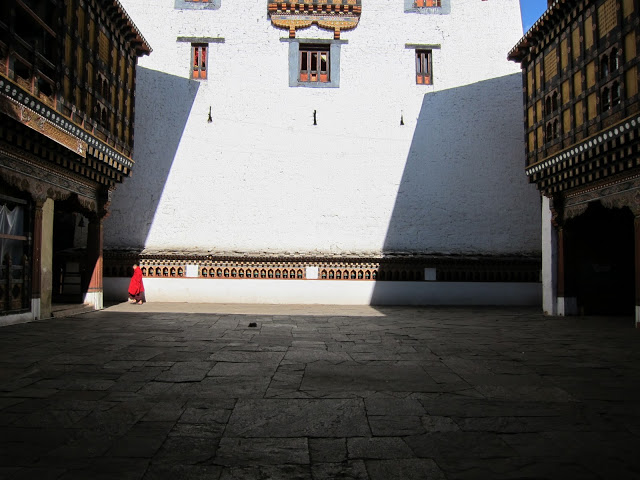 Monk in the Paro Dzong 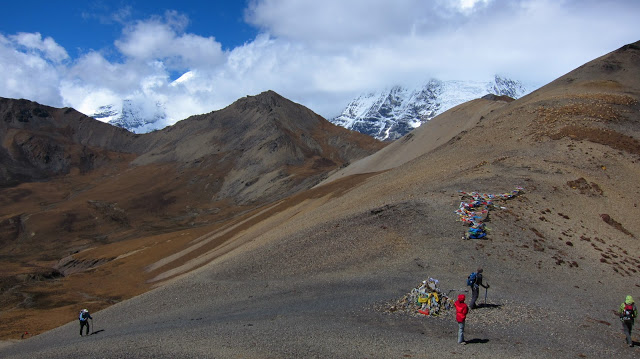 Nylie La – our first big pass of the trek.

Life on our trek might not have been easy at all times, but it was certainly simple compared to my busy life in the states.  As our guide Phil Ershler said each night after describing the route for the next day, “Let’s wake up tomorrow, pack our things, eat breakfast and go for a walk.”  Except that our “walks” were far from ordinary,  with the vastness of the Himalayas stretching out in all directions.  Our days began at 6AM with a wake up call from our Bhutanese staff, who would present us with tea and washing water.  Breakfast consisted of porridge, horrific attempts to pour honey directly out of the honey jar (“Use a spoon and twirl it!!!”), eggs and pancakes.  After hoisting our day packs, we would walk.  As our feet danced over rocks and dirt, our lungs burned with the effort of hiking at high altitude, but our eyes were insatiable for the views that surrounded us in all directions.  Mountains, yaks, villages, rivers – up and down, traversing, descending, ascending … anxious to round the next corner, because we knew that the view would always take our breath away more than the altitude ever could. 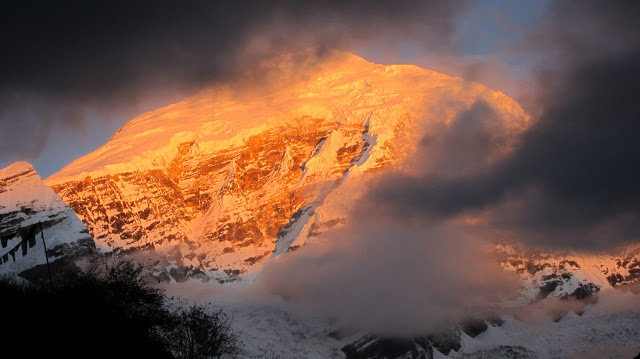 Just another day of hiking in the Himalayas….Jichu Drake in background. 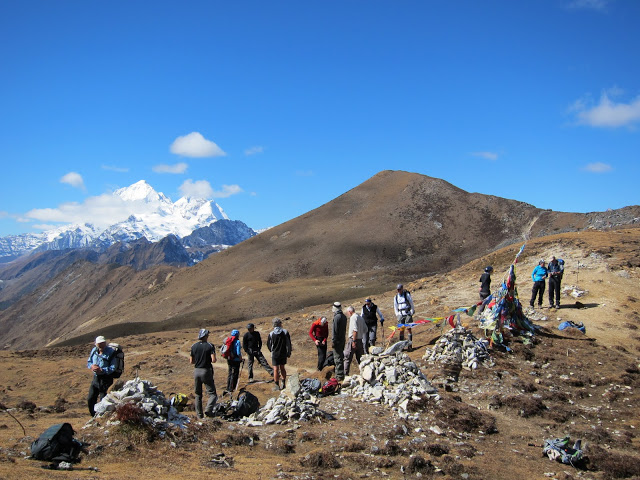 It was a cool morning on the 7th day of the trek, and we had gained 500 feet of steep elevation from the small village of Chebisa – a village where we watched young girls collect yak dung for fuel, a village where we played hide and seek with a few toddlers, a village where I actually prayed for my water filter to work as I pumped water from a creek next to a pile of horse poop.  We stopped for a break, and Phil Ershler, our guide and master of literary timing, recited a poignant quote from the legendary northwest climber Fred Beckey, “We become what we behold, but the view is not the same for the man who pays for beauty in the currency of toil.” Indeed, as I looked around, it was hard not to gasp – the drama of the Himalayan mountains is astounding.   The precipitous ridges and glaciated slopes of Jomolhari, Jichu Drake and countless other peaks slice through the sky with an intimidating presence and tiny, hand built houses and villages sit quietly in their looming shadows.  However, as we pressed onward, day after day, it became acutely apparent that the rewards of our toil were not only in the views that we saw, but also with the people we met, the homes we entered and the laughter we shared. 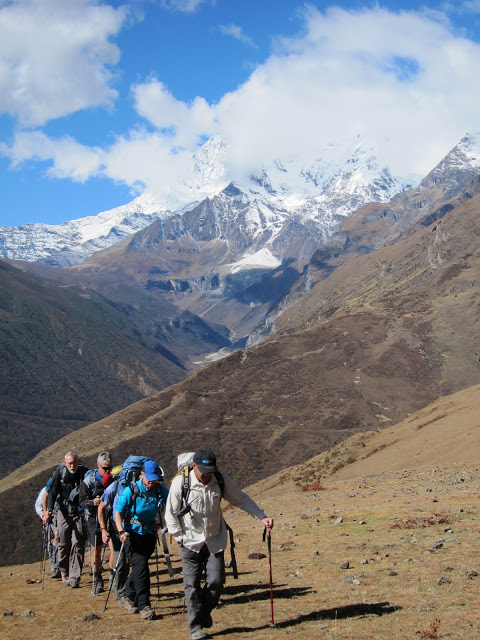 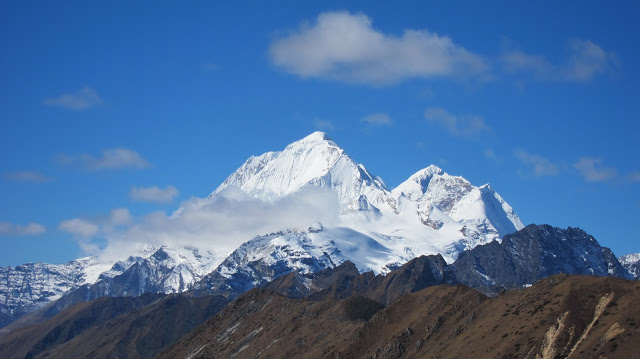 There are so many moments on our trip that I wish I could capture – even in recollection, I find myself doubled over in hysterics (albeit, it is much easier to breathe down here at sea level).  Whether it was an intense competition to guess the nightly soup flavor and/or the number of veggie chunks found in aforementioned soup, or a game of hearts in which Phil Ershler was attempting to “shoot the moon” for the 19th time, the laughter never ceased.  There was a “tiger” in Laya, numerous incidents whereby various members of the trek collapsed tables and/or chairs (and sometimes both simultaneously), and, of course, the constant companionship of our canine friends “Blackie” and “Scarface”.  I will never forget Vic’s “Mark the time!” command at the start of each day or the finger-numbing excitement of setting up 9 tents in the snow in Laya in a record-breaking 10 minutes (Mountain Hardwear would be proud!).  Volleyball with monklettes.  Entering a ceremony room in the Gasa Dzong in which women were not permitted and making an entire room of monks laugh.  Deb’s extreme horseback riding down near-vertical rocks.  I could fill an entire book with anecdotes from our experience together, but the bottom line is that, even when the days were long and strenuous, we had fun. 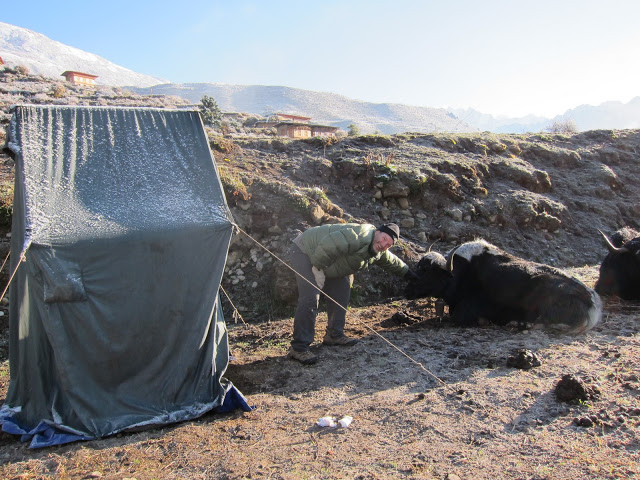 Is this ever really a good idea?  Ok, wait … don’t answer that question. 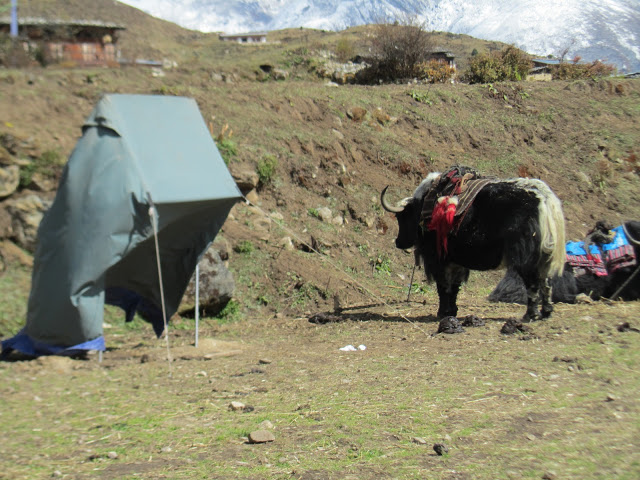 Timing is everything, when it comes to the pee pee tent. 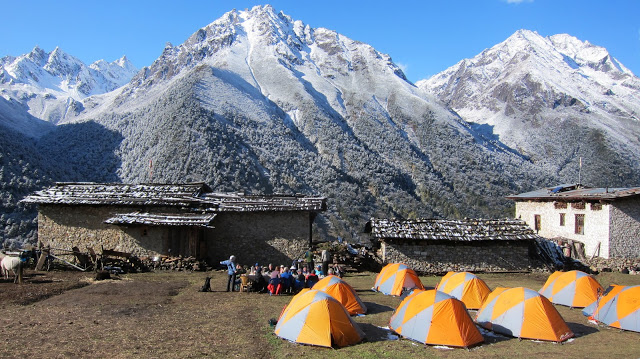 Our campsite in the village of Laya. 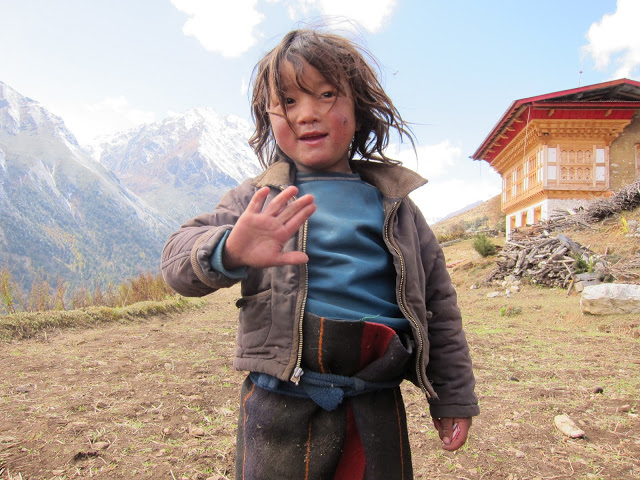 The last night of the trek was particularly memorable for me.  Unable to sleep, I sat in the cook tent watching Raj and his crew prepare lunch – our final lunch – for the next day.  I sat on the dirt (or was it yak dung?) in silence as Kelzang rolled balls of dough into flat circles and then filled them with cheese before folding the dough and pressing the edges delicately with a fork.  Kinley held tightly packed bundles of spinach and sliced the green leaves thinly into a bowl.  Tenzin fried the cheese pastries in oil and kept watch over a pot of steaming potatoes.  As I watched, I was struck by the simplicity and beauty of the scene unfolding before me – as well as the realization that this phase of our adventure was drawing to a close.  A few tears streamed down my face, and as Tenzin noticed my tears, he asked why I was sad.  Struggling to explain, I stammered, “I’m sad for it to end.”  I don’t know if they fully grasped the reason for my tears, but they determined that the best way to cheer me up was to hold a horse feed bag lifting contest.  I laughed as they took turns struggling to lift two giant 50kg bags of horse feed, and then, to be a good sport, I lifted one bag. 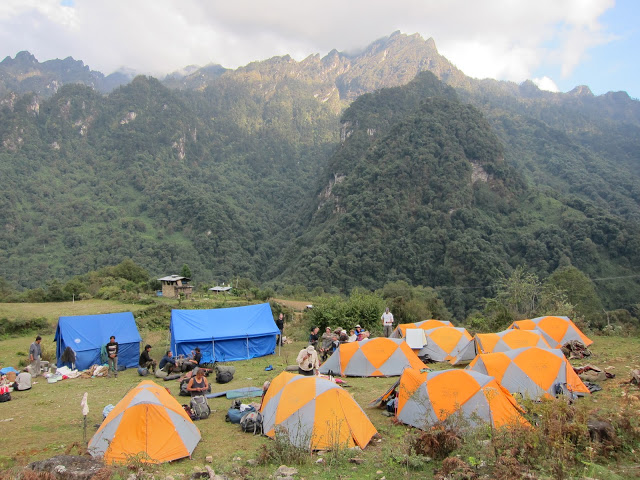 As the trekking group became accustomed, I never travelled anywhere without my small red journal – jotting down notes, writing about our journey and keeping tabs on inappropriate Bhutanese verbiage.  I share with you now my last entry from our trek, written after our bus ride from Gasa to Thimphu :

We ate lunch near a river – I sat and ate the spinach that I had watched Kinley prepare the night before, and the cheese pastries that Kelzang had carefully rolled.  When I had watched those items being prepared, it seemed as though the meal would never become a reality – we wouldn’t have to say goodbye … the next day would just be another day on the trek … except it wasn’t.  Here we were, eating Raj’s final meal … and the memory of its simple creation so vivid in my mind that I could almost hear the knife slicing through the crisp stalks of spinach.

We continued on the bus ride, where dirt turned to poor quality pavement, which turned to asphalt as we reached Punakha.  The air was thick with heat and oxygen.  We headed up and over a windy pass from Punakha and started towards Thimphu, where the lights of the city and the noises seemed blinding and loud compared to the glow of the moon and stars and the distant ringing of yak bells.

I laid in my bed in the hotel.  I used a toilet that flushed.  I took a shower and washed away 14 days of the most wonderful grime ever.  We ate dinner in a building without worrying about the table collapsing.  We agreed that Raj’s food tasted better than the hotel food.  We didn’t step on yak dung walking around.  And yet, as I laid in my hotel bed – I longed for the tent.  I would have given anything for another day … but does the adventure really ever end? 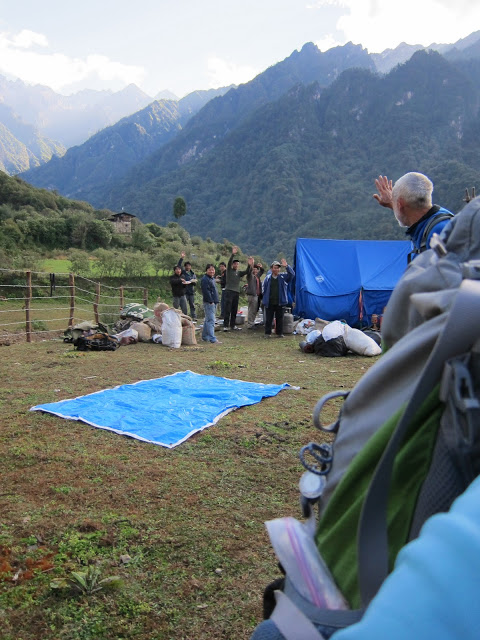 As a group, we shared a unique and special experience together during our 14 days trekking in Bhutan.  Husbands and wives, a father and a daughter, and solo travellers – united in friendship by the 150 miles we travelled together on foot (and by horse).  Our journeythrough Bhutan was as special as the mountains which mesmerized us, it was as special as the people that cared for us and it was as special as the memories that we now hold close in our hearts.  It is impossible for me to capture the joy that I felt – the joy that we felt – on our trek, and so my only hope is that in reading this, you can recall  your own experience, and find comfort in the fact that there are 15 other travellers whose eyes turn skyward when dreaming about sunrise on Jichu Drake … 15 travellers whose ears perk up at the distant sound of a ringing bell … 15 travellers whose lives are similarly enriched with the happiness and innocence of a special place called Bhutan.

As I write this now, I glance across the room and I notice my little red journal lying open on a table.  There are always more pages to fill. 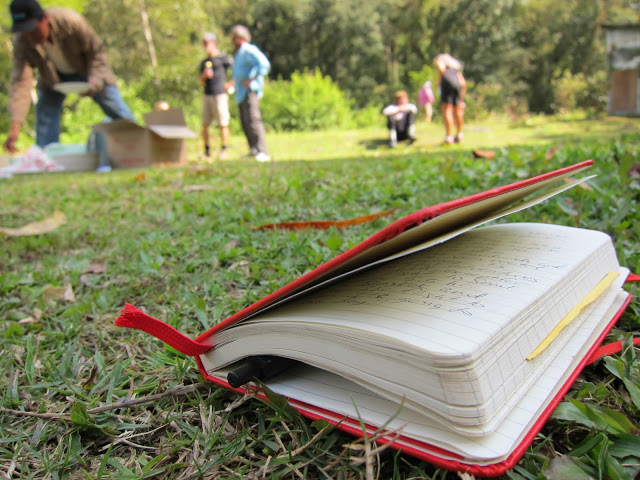 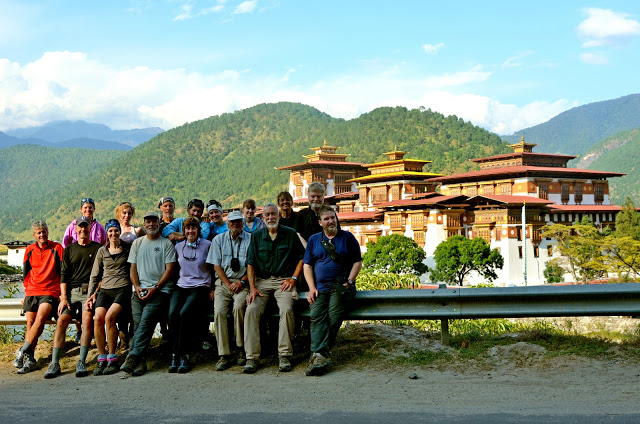 Our team, in front of the Punakha Dzong.